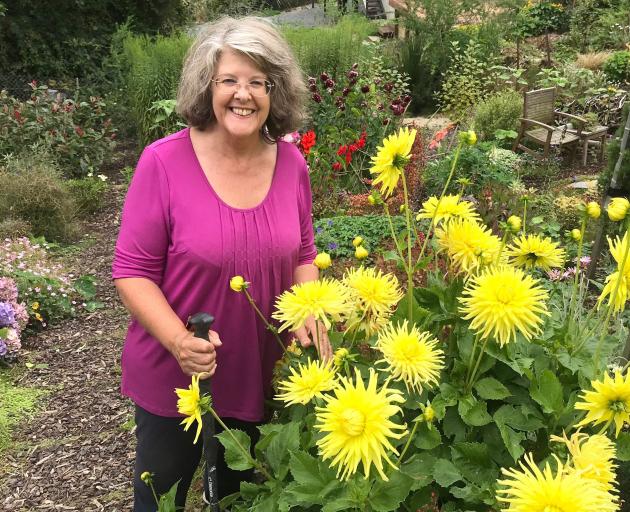 Lynnaire Johnston with a vivid yellow dahlia.
Gillian Vine is impressed by the transformation of a neglected Dunedin garden.

When Lynnaire Johnston and her husband, Matt, bought a property in Ravensbourne almost four years ago, she saw its potential.

Not many gardeners would have been able to envisage what to do with the steep, weed-filled section dominated by a huge pile of green rubbish and a sprawling giant rhododendron.

There were Douglas firs on one side and “a very sick apple tree”, which — like most plants worth trying to save — was “starving to death”. 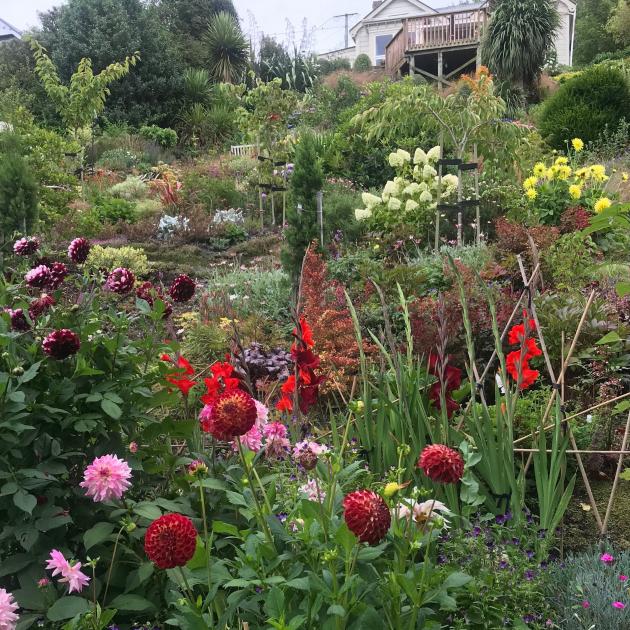 From the bottom of the section, the steepness of the garden is evident.
The first step was taking out the lawn.

The remaining ground was then cleared, which led to the discovery of areas ranging from dry to boggy and what Lynnaire’s gardener, Jess Campion, thinks was once terracing. 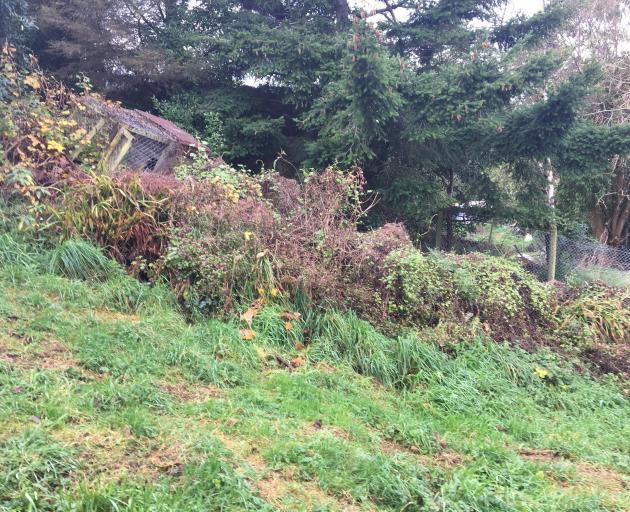 A June 2018 photo of part of the overgrown Ravensbourne garden.
Jess works four hours a fortnight and Lynnaire says she couldn’t have managed the revamp without her.

The remains of the old brick terrace were “a bit grim” but did indicate something of the original layout.

Another hint of the history was uncovering piles of glass panes, which Lynnaire presumed meant there had once been a glasshouse on the small flat part of the garden.

As much as possible was utilised. The heap of green waste proved handy for compost/mulch and branches were used on the northern boundary to create dead-hedging, a popular European technique rarely seen in New Zealand. Other branches were piled to make Hugel mounds, also known as Hügelkultur, an Austrian concept that helps speed the decomposition of logs. The piles have soil and/or compost on top and plants are grown in the raised beds. 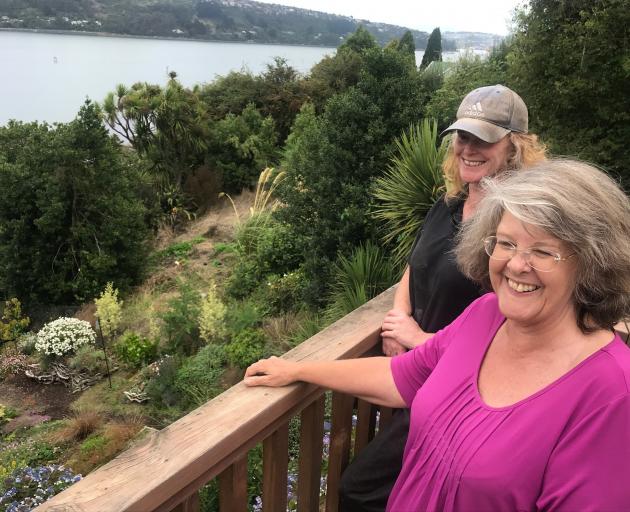 Lynnaire Johnston and her gardener, Jess Campion. PHOTOS: GILLIAN VINE
“It’s amazing how much rubbish you can get rid of with one of these,” Lynnaire says.

Planting started at the top and progressed downhill, with areas designated according to the moisture levels. Thus, the highest part and sides became home to plants that preferred dry feet; in the centre were created the Rain Garden and The Swamp, with a gravel-filled rill directing water down to The Bog at the lowest level.

When the couple moved from their large Waitati property, Lynnaire brought lots of plants but because they couldn’t be planted immediately, a friend cared for the hydrangeas and hellebores for a year while the Ravenbourne section was being worked on.

There were donations, too, including 80 perennials from a friend in Picton, little pittosporums from another woman and the gift of a two-toned dahlia from a third. 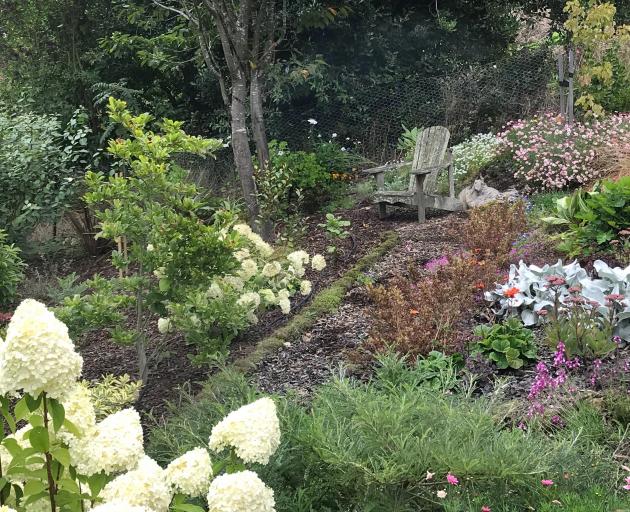 A chair marks the halfway point in the garden. The hydrangea (lower left) is Limelight.
“Volunteers” popped up. “Grasses [by the rill] have all just shown up. They have been amazing,” Lynnaire says.

Not as welcome are the poppies: “We do quite a good line in wild poppies and I pull the blighters out.”

Trees and shrubs were important additions, with the emphasis on smaller varieties.

Lynnaire and Jess learnt some had to be carefully sited because of the northeasterly winds and an Acer (maple) had to be moved into a more sheltered spot.

The selection of maples gives colour year-round. A. palmatum var. dissectum Crimson Queen is a fine-leafed Japanese maple planted in memory of Matt’s mother; Viridis and a snakebark maple were planted for Lynnaire’s mother; and a magnolia commemorates her father. 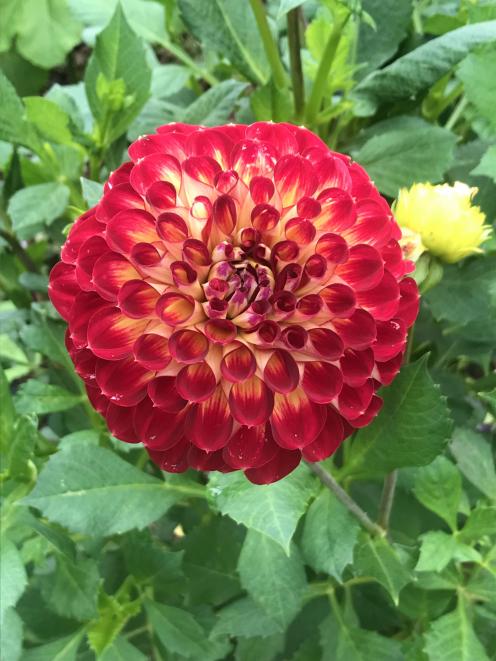 A bicoloured ball dahlia, probably Jowey Joshua, was a gift from a friend.
Another maple, A. palmatum Senkaki, was selected not only for its buttery-gold foliage in autumn but also for the bright red stems that look great in winter, as does the red-stemmed form of dogwood (Cornus alba).

The Waitati hydrangeas have thrived, signalling the more acid soil in their new home by changing from their original pink to blue. An exception is Limelight, whose conical flowerheads open green and fade to creamy white.

Dahlias, gladioli, hardy geraniums — “I do a lot of geraniums” — paeonies, lilies, hostas, Dianthus and ground-hugging native bidibidi (Acaena) add to the appeal.

And Lynnaire wouldn’t be without heucheras.

“I love them for their all-year-round fabulousness,” she says.

It seems that, for revamping a neglected garden in less than four years, Lynnaire and Jess need an award for their all-year-round fabulousness.