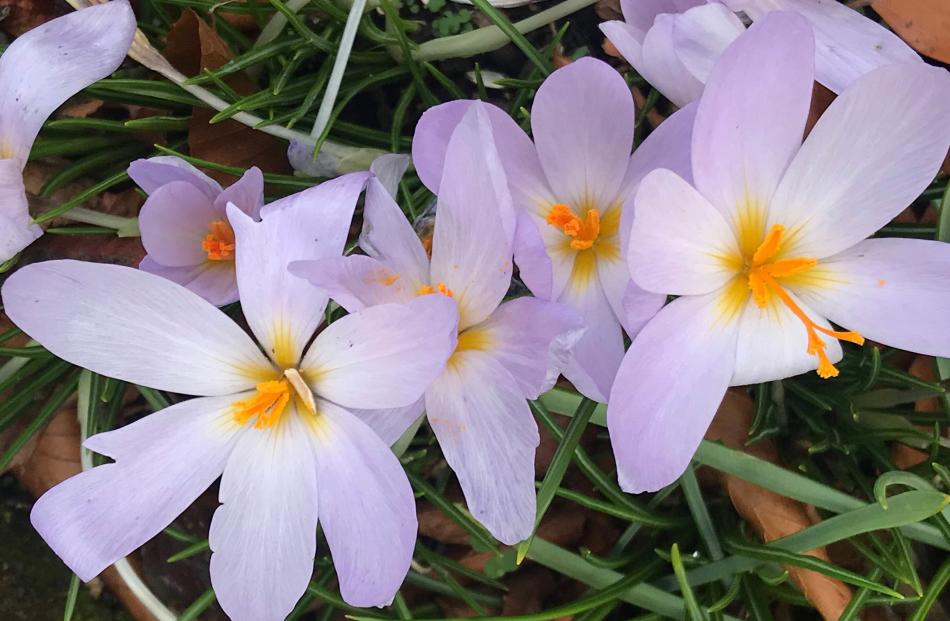 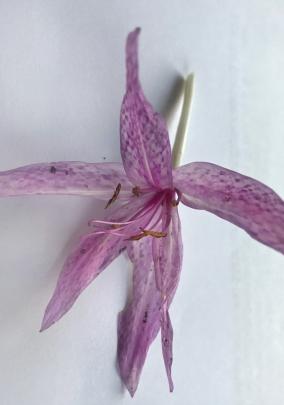 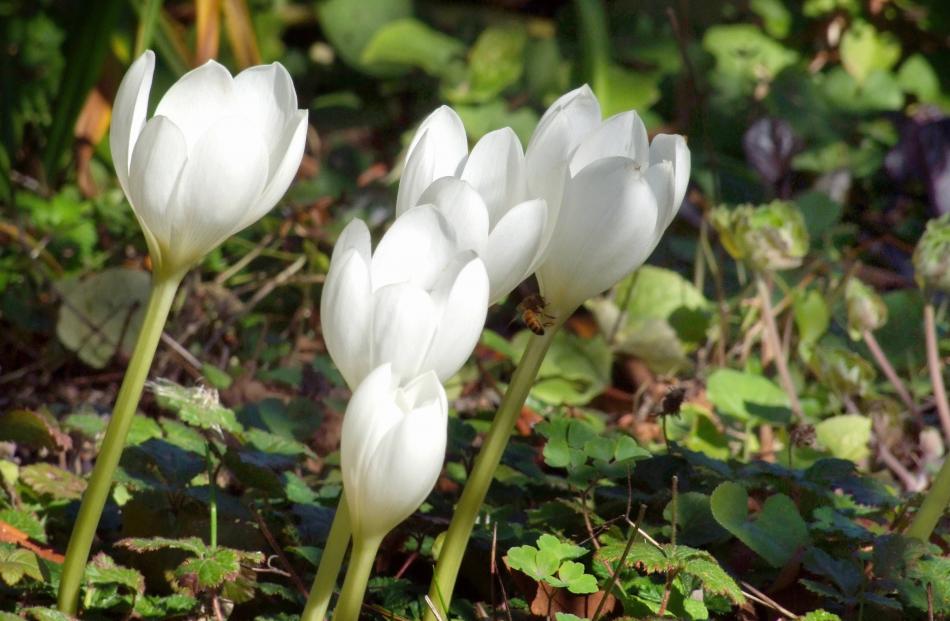 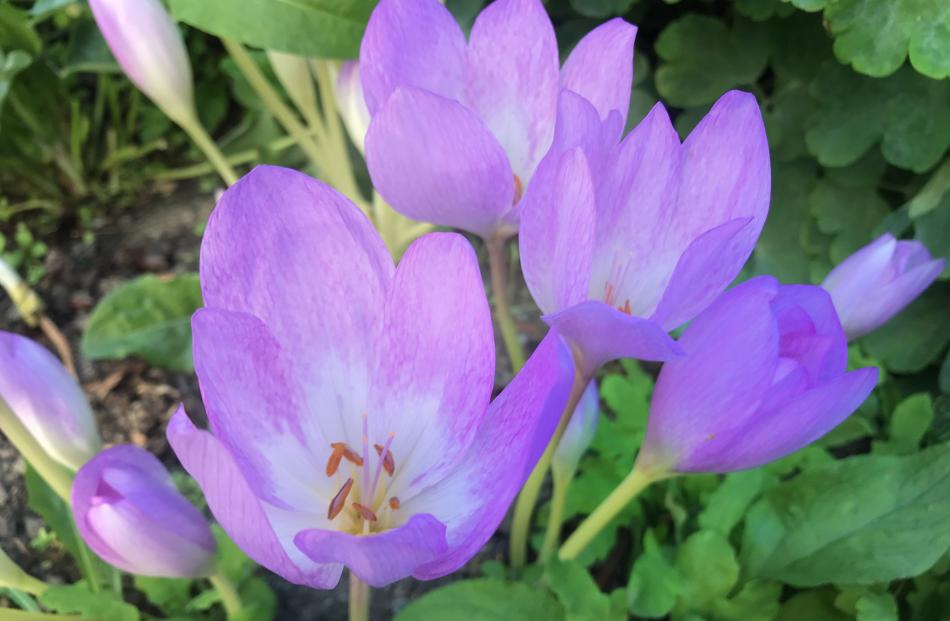 Pale throats are a feature of Colchicum speciosum. 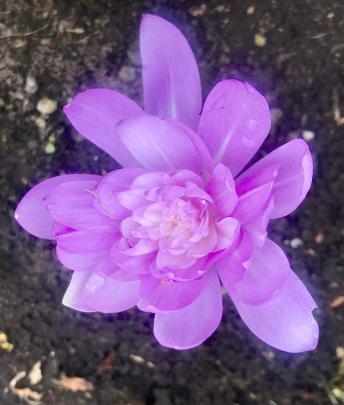 Waterlily is probably the most sought after autumn crocus (colchicum).

Gillian Vine looks at a bulb family that signals the seasonal change.

Flowers appearing above leafless bulbs herald the end of summer. Sometimes lumped together under the name naked ladies, they include belladonnas (Amaryllis belladonna), nerines and autumn crocuses.

There are a dozen or more true autumn-flowering crocus species, notably saffron (Crocus sativus), whose red stigmas produce the world’s most expensive spice.

Now comes the confusing bit: the mauve or white blooms we usually call autumn crocus are actually from another bulb family, Colchicaceae.

Best known is Colchicum speciosum, whose flower stems rise about 20cm above the ground. The white-throated blooms come in shades from mauve to purple and are crocus-like in shape. There is also a pure white form, Album. 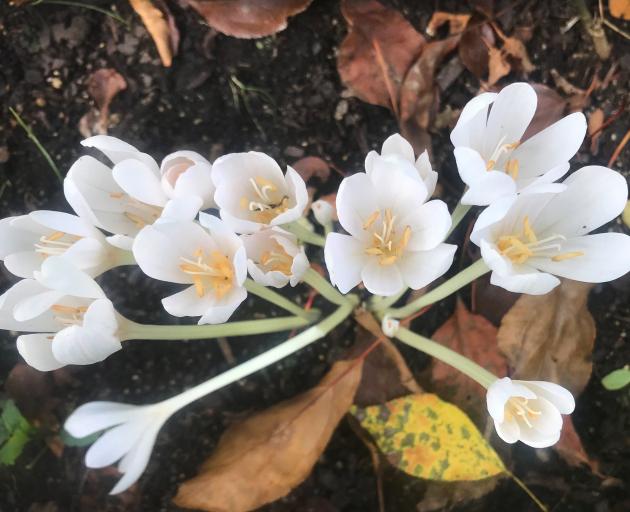 A small species, Colchicum x byzantinum Album or possibly Colchicum autumnale Album in the writer’s garden.
Easier to identify is C. agrippinum, thanks to its pointed petals which have a darker tessellated (chequered) pattern on a lilac background. In my garden, it flowers about the same time as an unnamed small-growing white I bought on a stall at garden show. I think it might be C. x byzantinum Album — or possibly C. autumnale Album — but whatever it is, it’s a wee beauty that has multiplied quickly.

Most sought after colchicum is probably Waterlily, the only double, large-flowered cultivar of its kind. Believed to be a cross between two single white species, it defied the expectation of its Dutch breeders not only by being deep pinky-mauve but also double.

One to covet is double white C. autumnale Alboplenum, which is smaller than Waterlily. I have never seen it for sale in New Zealand, so it may not have been introduced here.

The oddity among colchicums has to be C. luteum, a small species from Afghanistan and northern India, notable for yellow flowers that appear in spring, not autumn. 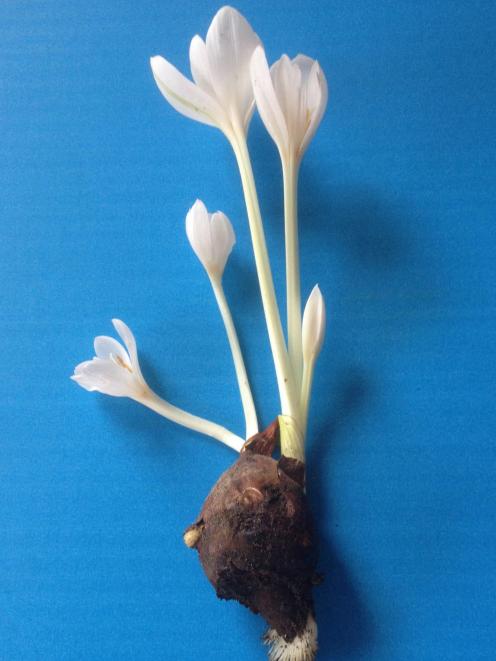 A colchicum bulb can have half a dozen flowers.
Colchicums have large, lumpy looking bulbs covered with shiny brown skin, unlike the small, neat shape and netted covering of true crocuses. Without digging them up, a simple way to tell them apart is that true crocuses have leaves at the same time as flowers, while colchicums are leafless when in bloom.

Depending on the species, colchicums flower from the end of summer until April and a single bulb can have half a dozen flowers.

Impressively cold hardy, they like reasonably rich soil and lots of sun but seem to grow anywhere as long as the ground is well drained. Colchicums can be naturalised in grass, too, so could be useful among spring-flowering daffodils to give a dash of late-season colour.

After blooming, the leaves appear and that is one of the downsides, as these tend to be floppy, strappy things that look decidedly untidy. However, the foliage dies down in spring so it’s not too bad.

The bulbs are great at multiplication and the best time to split clumps is when the leaves have withered.

I read that a weird characteristic of colchicums is that, when the flowers are cut, they last in a vase without water, so I tried it last week with a bloom knocked down by wind. The result was interesting: it remained in good nick for four days before the outer petals started to turn brown.

Another tip is to keep a dry bulb on a dish without water and it will still flower. I haven’t tried this: somehow it seems mean to deprive the bulb of nutrients.

All parts (including flowers, stigma and stamens) of every member of the colchicum clan are poisonous and should never be eaten. Derived from C. autumnale, colchicine has been used medicinally for more than 3000 years to treat joint swelling and is still sometimes prescribed as a gout treatment: don’t attempt a homemade version, as it can kill.