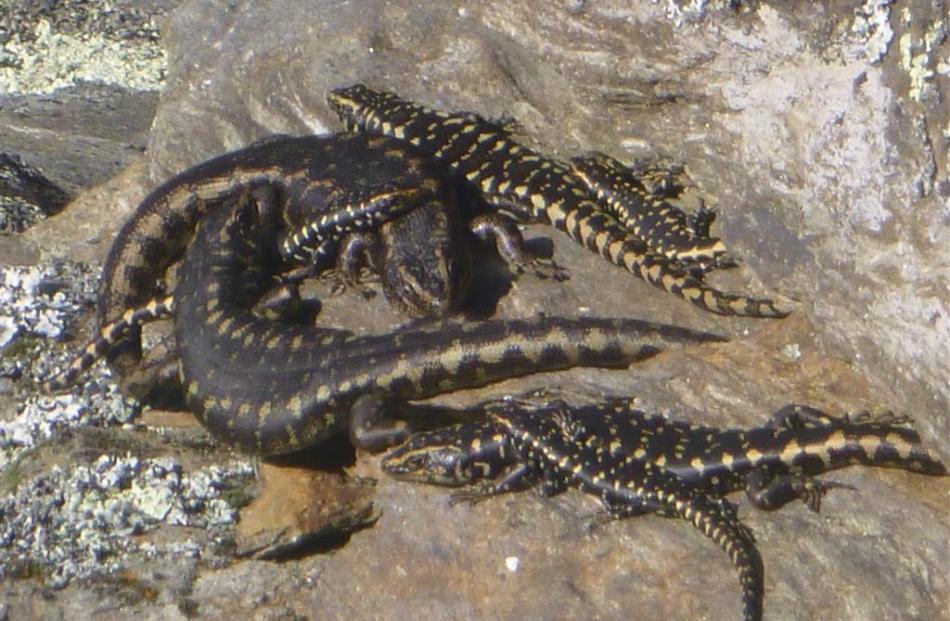 A knot of Otago skinks, including many recently born young, bask in the sun in their enclosure at Orokonui. Photo by Elton Smith. 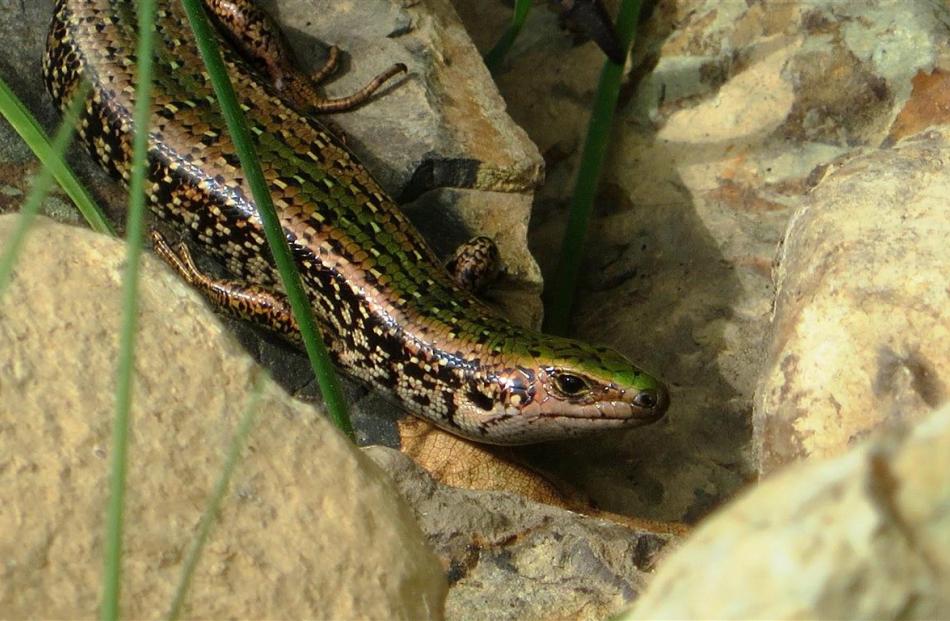 The green skink, named for the green band running down its back, is the latest newcomer to Orokonui. Photos by Carey Knox. 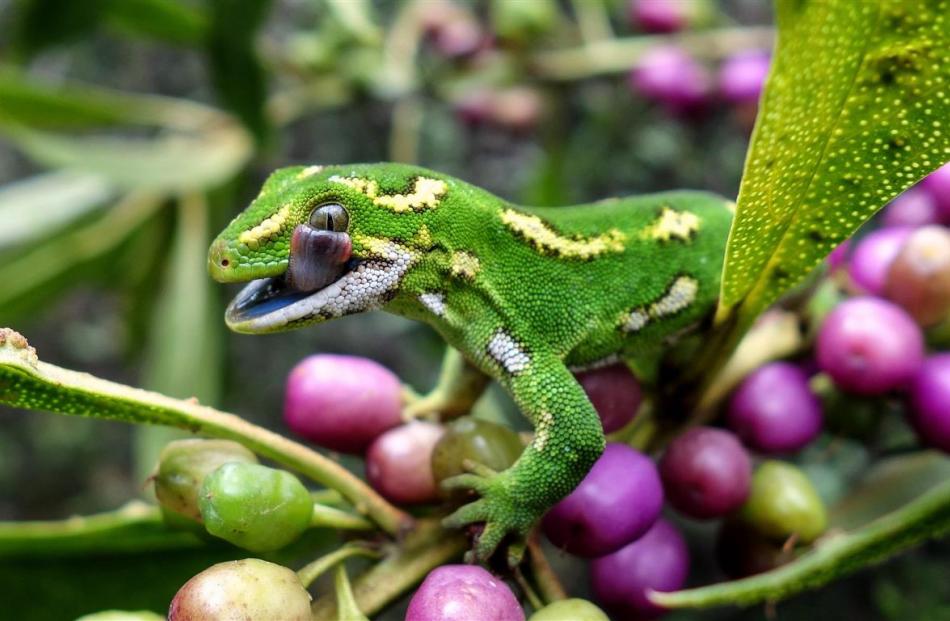 The jewelled gecko, seen here basking on a ngaio tree, is now well-established at Orokonui. 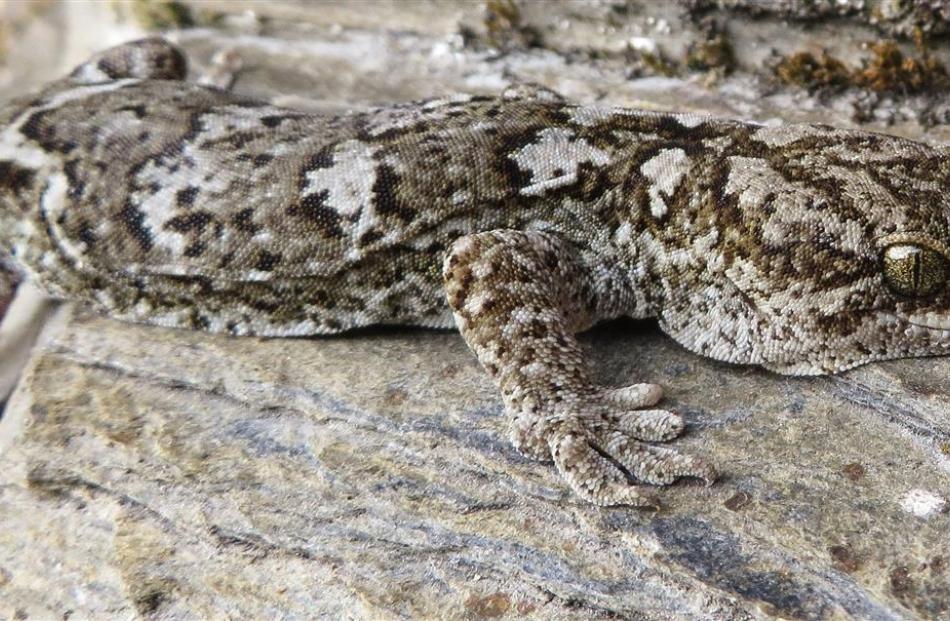 The korero gecko, perhaps the most common of Orokonui’s lizards, is seldom seen, being a night creature.

Herpetologist Carey Knox casts his eye over the lizards to be found at Orokonui Ecosanctuary.

The skinks and geckos within Orokonui are lapping up the autumn sunshine, and they had better make the most of it with the cold winter ahead!

Being cold-blooded, lizards rely on the warmth of the sun to go about their daily activities, such as foraging for juicy bugs or tasty berries.

For those who would like to see lizards at Orokonui, the Otago skink enclosure near the top of the sanctuary is a great place to start.

Good numbers of these large skinks can be sighted basking on the schist rock formations in a range of weather conditions, especially during cool or mild, sunny weather.

If you are lucky, you may see them basking together, as in the photograph at right where the skinks appear to be enjoying the sun and the warmth of each other's bodies.

Our eye-catching native birds are often at the heart of conservation efforts in New Zealand, including those at mainland-island sanctuaries.

However, sanctuaries such as Orokonui also have great potential for the conservation of lesser-known and more cryptic species, for example our endemic lizards (geckos and skinks).

New Zealand has a huge diversity of lizards, with around 100 species (approximately 43 geckos and 60 skinks).

Lizards were extremely abundant in pre-human times, some species numbering in the thousands per hectare.

They play a vital role in plant pollination and are important in spreading seed because they eat fruit.

They also prey upon a wide range of invertebrates.

Unfortunately, when humans arrived and brought in mammals such as cats, rats, mice, stoats and hedgehogs, lizard populations were devastated and are now often "just clinging on'' at a small percentage of their former abundance.

Wildlife poaching and habitat modification have also had a detrimental effect on some species.

Today Doc recognises that over 85% of our lizard species are either "at risk'' or "threatened''.

Lizard translocations to offshore and mainland islands are becoming increasingly frequent in order to secure some species.

Mainland islands provide lizard populations with protection from the two major threats to their survival, introduced mammals and habitat loss, potentially allowing them to re-establish and return to their former abundance.

At least two of these species (southern grass skink and korero gecko) were present prior to the construction of the fence and the eradication of pests.

Korero geckos are brown/grey nocturnal reptiles which occupy rocky places in the sanctuary, but can also be found in the forest where there are suitable retreats.

Southern grass skinks are present mostly in grassy areas within the sanctuary and are avid sun-baskers, so keep an eye out when walking past long grass on track edges.

The jewelled geckos were first translocated in 2008-09, with a second transfer in 2012, and now appear to be well-established and spreading into new habitats.

Newborn babies have been sighted, and females which have recently given birth.

Jewelled geckos live in native trees and shrubs and during warm, sunny weather bask among the foliage.

Green skinks were only recently translocated, but initial post-release monitoring is yielding promising results and several babies have been seen in recent weeks.

They occupy a wide range of habitats, but prefer well vegetated or damp habitats with plenty of ground cover.

Orokonui's wide range of habitats is providing ideal conditions for the recovery of these delightful species.

- Carey Knox is an independent herpetologist who works with lizards all around New Zealand and has translocated two lizard species to Orokonui Ecosanctuary.