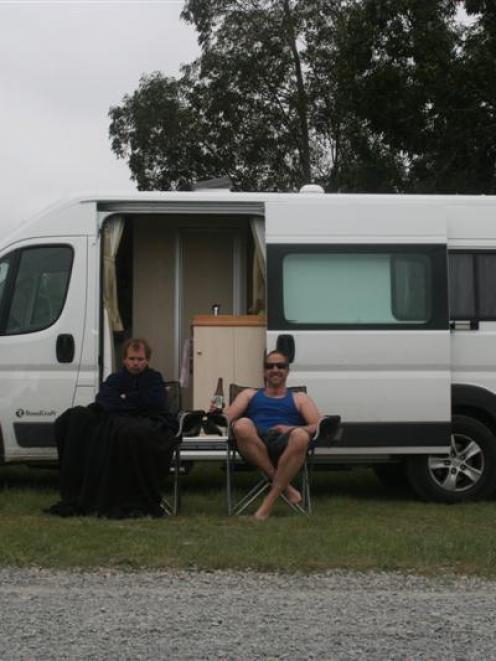 Nigel Benson (also pictured at left) and Pieter van de Klundert (both of Dunedin) on their campervan holiday around the northern South Island.
Nigel Benson was as excited as we've seen him when he was offered a free holiday in a 21st century campervan late last year. But it turned into the holiday from hell.

It was my first holiday in a year and I couldn't wait.

New Zealand campervan manufacturer RoadCraft had offered me one of their state-of the-art mobile homes to take through its paces.

Actually, it was more of a mobile palace than a mobile home.

The $129,000 Base Jumper model was a veritable four-star hotel on wheels.

The 6m-long vans are based on the Fiat Ducato and boast a flat-screen colour TV, MP3 surround sound stereo, DVD player, bathroom, indoor and outdoor showers and just about every other modern appliance known.

The only thing missing was room service. And it wasn't afraid of getting its feet wet.

The vehicle was designed for rugged adventures and, if we did come unstuck, it had a long-life energy system which provided enough power to last for four days.

Rescuers would surely find us in four days.

"Just go for your life. They're designed for New Zealand off-road conditions, so get out there and have fun."

Right you are, then.

I grabbed my mate Pieter van de Klundert, who is the director of Quality Service Management in Dunedin, and off we went.

The plan was to head up to Golden Bay and the northwest corner of the South Island, an area I've never really explored.

Tom Jones from Dunedin's Green Man Brewery also kindly loaded us up with a few dozen of his fine products.

Speight's Breweries flew me to London on "The Great Beer Delivery" last year, so it's been a good couple of years for beers.

So, all set for a great holiday then. Well, not exactly.

We were barely out of Christchurch when I started feeling ill. Like, seriously ill.

My throat was burning and I felt weak and couldn't eat and had a terrible fever.

But we were deep in the northern South Island wilderness, so all I could do was lay in the back of the, albeit very comfortable, camper while Piet drove on and enjoyed the scenery.

He whistled and sang along with the stereo and told me about all beautiful places we were passing.

We wound our way inland from the coast through places with names like Mouse Point, past Hanmer Springs and up through the Nelson Lakes National Park; some of the most beautiful country in the country.

Piet was having a ball.

I lay in the back, gritting my teeth and silently hating him.

Just before Nelson - I noted with bitter irony - there is a small township called Hope. Yeah, right.

We caught up with a good mate of mine in Nelson. He and Piet discussed my condition; in a fairly detached sort of way, I thought.

And over a few of my Green Man beers, of course.

Deciding that nothing could be done, the two new friends abandoned me and went off into town together to have some fun.

I stayed in the back of the campervan groaning.

And so it continued. I rolled around in misery, while Piet drank my beer and explored the top of the South Island, through Motueka and Takaka and Golden Bay.

Golden Bay was overcast and drizzling. It matched my mood perfectly.

But Piet was quite happy. Drinking my beer.

On the way back through Nelson, he convinced me to go to a doctor.

By then, I'd lost nearly 10kg and the doctor was talking about putting me in hospital for the night.

Bugger that - I was on holiday. So he gave me a plethora of painkillers and on we continued.

We edged our way down the Paparoa National Park to Punakaiki and through Greymouth, before heading inland to Blackball, where we visited the infamous Hilton Hotel.

Down the street, the Blackball pie cart served up one of the best whitebait patties either of us had ever tasted. It was the first solid food I'd managed since we left Christchurch six days earlier.

With our eagerly awaited trip nearly at an end, I was finally coming right.

Then it was back down the coast to the Kumara Junction and on to Otira Highway and Arthurs Pass.

But even then our dramas weren't over. At Turiwhate, we decide to go exploring off-road and, of course, immediately got hopelessly trapped in soft sand.

We jumped up and down at passing traffic like demented monkeys until a good Southern man in a four-wheel-drive (Swanndri, oilskin vest and laconic "howya goin' fellas?") finally pulled over and towed us out.

We gave him the last of my Green Man beer by way of thanks.

Piet reckons he's never going on holiday with me again. But we both want one of these campers.

The company that became RoadCraft was established in a backyard workshop in Otahuhu in 2004 by John Managh.

Managh wanted to build the ultimate exploration vehicle after travelling overseas in exotic locations like Alaska and the Sahara Desert.

He started by importing low-mileage Toyota Hiace vans from Japan, which were leased to tourists.

"I turned the basic vans into sweet little campers. I figured out what worked and what didn't," he recalls.

His sister, Mary Hamilton, soon came on board.

"People started asking if we had anything bigger and Mary's kids were egging us to go on the adventures as well. So, we picked up some larger ex-rental motorhomes and gave them a new lease of life.

"We were in the family camping game.

"The kids loved it - a new place to visit every day, but the same bed to sleep in at night and the same drawer to keep their gear in. Business was good.

"But sadly, after a while, we realised that the vehicles didn't really like the adventures we were into - the bumpy roads, the mountain cold and carrying lots of toys.

"Conventional vans are built to transport you from campground to campground. At the end of the day, you hook up to mains power and everything works.

"We wanted an OCV that allows you the freedom to camp over anywhere, without being reliant on a 240V hook-up," Managh says.

"We were sure that people wanted motorhomes they could take anywhere, anytime and have a great time doing it.

"So, we bought a motorhome manufacturing and refit business and renamed it `RoadCraft'.

With a well-set up workshop and a team of experienced motorhome builders, we were ready to put together the ultimate explorer.

"Over a couple of months, our first Base Jumper was handcrafted, refined, road-tested, and finally put into production. Before long, the locals started asking where they could get one.

So, we moved out of the workshop in Otahuhu, and set up a scarily-big factory near the airport, so we could get serious about manufacturing."

The company now sells and leases the mobile homes from Auckland and Christchurch.