The dance of the takahe 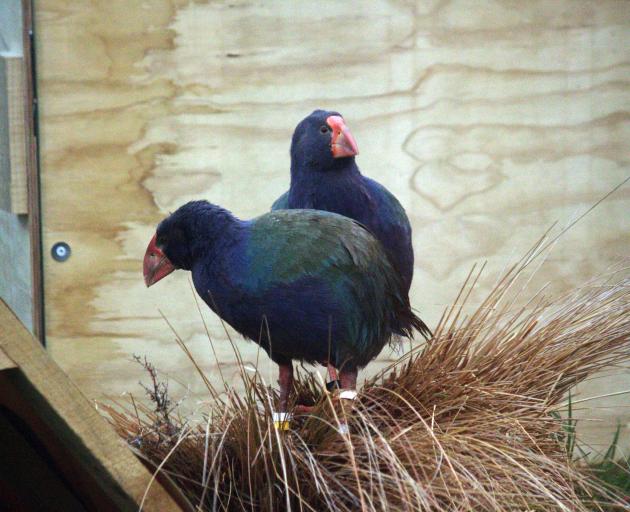 Mihiwaka (back) stands on a tussock for a better view with his new foster brother at Burwood. Photos: Eeva-Katri Kumpula

Orokonui volunteer Eeva-Katri Kumpula has recently been volunteering at the Burwood Takahe Centre as well, and has been able to find out where Orokonui’s takahe offspring are now, and their part in the recovery programme.

Orokonui staff are justifiably proud the ecosanctuary has morphed from being a home for a single pair of advocacy birds into becoming a productive part of the Department of Conservation's Takahe Recovery Programme.

Provided with the right conditions and care, Paku and Quammen have successfully raised a series of chicks that have gone out into the wider world, including helping found what is hoped to be a second wild population in Kahurangi National Park.

Now our good old lovebirds, Paku and Quammen are on their own again but hopefully just until next spring. So where are the young ones now, the three fostered chicks, and their own two biological offspring? 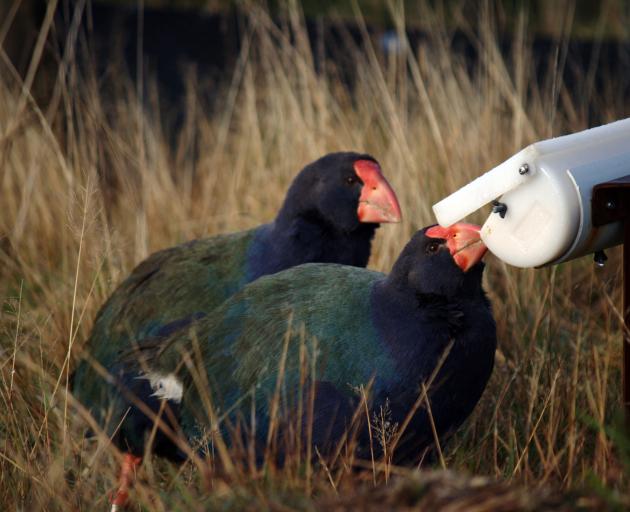 Tumanako (front) having a morning snack with partner Bendigo.

The first (foster chick) takahe to hatch at Orokonui in November 2015, Kotahi, was first thought to be a female, but turned out to be a male. Kotahi, young as he is, has become a dad for the first time this year at the Burwood Takahe Centre! Takahe don't normally start to breed until about 3 to 4 years of age, but Kotahi's partner Weydon is a bit older and together they have successfully hatched a chick. Kotahi is also helping raise two foster chicks at the same time. So he's a busy dad of three, helping his species multiply!

In November 2016 two foster eggs were brought into Orokonui for Paku and Quammen to incubate. They both successfully hatched, and the male chick, Wheko, was quickly snapped up the following fall, as there are fewer male takahe being hatched than females. So every male gets paired up quickly with a genetically well-matched female to hopefully produce chicks in the future. Wheko went to Burwood and was paired with Jenkins. They are all loved up now!

Meanwhile, Wheko's sister, Tumanako, stayed at Orokonui for a year longer and helped her foster parents Paku and Quammen raise this year's takahe chick. Now Tumanako has moved to Burwood too, and she has found love with the handsome Bendigo. It took them only 30 minutes to be totally smitten with each other and proceed to blissful, mutual preening. Here's hoping for chicks from them, too, in a couple of years! 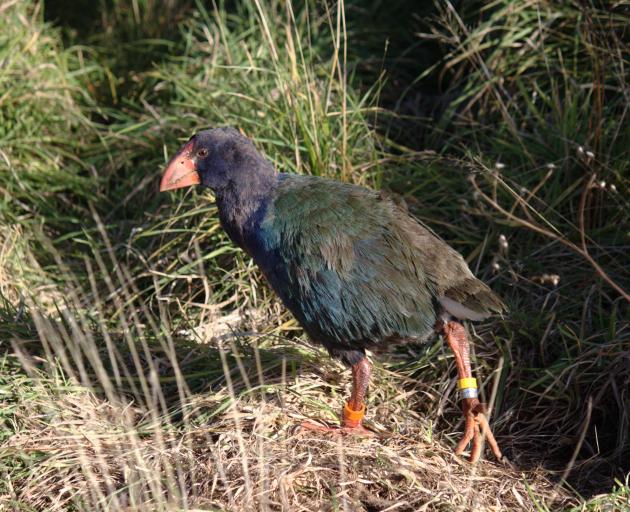 The next generation: Kotahi’s chick Arnot, at Burwood.

When the two foster eggs were brought to Orokonui in 2016, to the rangers' surprise one of Paku and Quammen's own eggs was found to be fertile, too. This egg was behind the others in development, so it had to be taken to be fostered by two other takahe at Te Anau Bird Sanctuary.

Ehara is still young, but last summer she already had a ''summer job'' of being a juvenile helper (to Tumanako and Wheko's biological parents, no less). In the takahe world, last year's female chick helps care for the following year's new chicks. It makes sense - maximise the survival of the new chicks by having a caring ''big sister'' help feed the babies. And Ehara did a great job at Burwood, until being moved to Kahurangi recently to help the new wild population establish there. 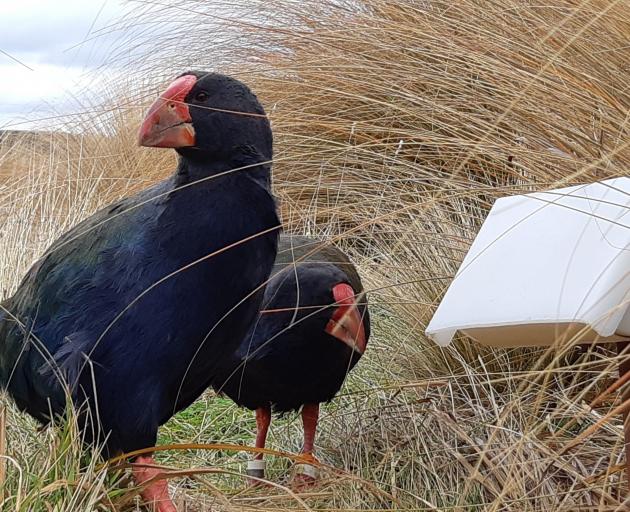 This year's Orokonui chick, Mihiwaka, who hatched in November 2017, was the biological offspring of Paku and Quammen, who for the first time have raised their very own chick. Mihiwaka turned out to be a male. He was therefore snapped up quicker than you can say ''Save your species!'', and he went to Burwood recently to learn the Fiordland winter ways with two other young male chicks, under the care of two experienced adult takahe parents. Takahe learn from other takahe by observing them and Fiordland birds will teach the newcomers how to find food such as juicy tussock roots in their challenging habitat.

So our Orokonui takahe whanau is spreading far and wide and doing great things. Thank you for your support to them, be it through volunteering or simply by visiting the ecosanctuary. The need for support, particularly for the new population at Kahurangi, is ongoing. If you would like to sponsor our Ehara in her important work there, you can do that through the Doc website: doc.govt.nz/sponsor-a-takahe

- Eeva-Katri Kumpula is a postgraduate student who has volunteered at many of New Zealand's ecosanctuaries, and is particularly attached to takahe.