Echoes of a lost past 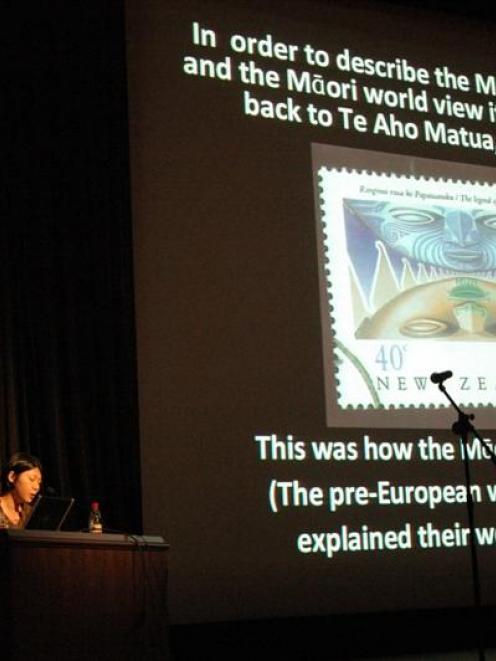 "This is a very important exhibition for the Shanghai Museum," Prof Chen says.

It is the first exhibition of the aboriginal people of the South Pacific and their art at the museum and reflects many aspects of Maori life.

Many Chinese people, both ordinary citizens and academics, had been looking forward to the show. 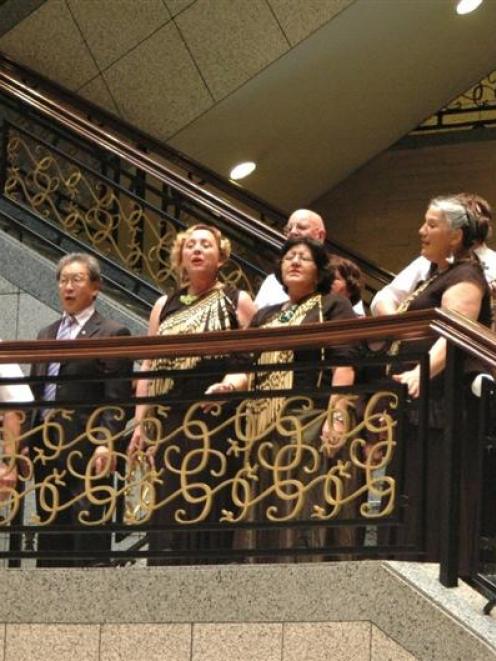 "This actually gives us a hint ... to see a close relationship between different cultures."

He notes that "a stone implement, an adze" in the Te Ao Maori show is "almost identical" to an ancient Chinese adze, and there is also a resemblance to an ancient Indian adze found in the United States.

He reflected that DNA research had pointed to genetic connections between Maori ancestors and early inhabitants of Taiwan.

The ancient Yue people of southeast China had shared with Maori and with Mayan civilisation in Central America a deep involvement with the creation of jade or greenstone artefacts.

After being involved in an encounter with the Chu State more than 2000 years ago, the Yue people had seemingly disappeared and it had been unclear what had happened to them.

They may have travelled south to Taiwan, and there could be ancestral links with Maori, he said.

Some Yue artefacts discovered by archaeologists featured tattoo-like markings similar to those found on Maori hei tiki in the Otago Museum show, and some motifs found on flax work in the show were "very similar to Chinese textiles".

He had noted many other similarities with Maori, including the pronunciation of Maori words and in a shared preference for using short words and brief particles in both Maori and Chinese languages.

Delegations from the Dunedin City Council and the Otago Museum were active in Shanghai last week, including attending a sister city function organised by Michael Swain, the New Zealand consul-general.

Many Dunedin representatives felt the 17-year sister city relationship was "blossoming" and rapidly developing, but Prof Chen suggests that close ancient relationships may also be involved.

Many visitors from Dunedin making their first visit to Shanghai were impressed with the huge scale of the place, which is already internationally respected as a leading global city, major port, trading and commercial hub, and one of the world's major financial centres.

It was hard not to be impressed with the ambition and sophistication of the Shanghai Maglev Train, a magnetic levitation train, which travels at up to 430kmh between the giant Shanghai Pudong International Airport and the outskirts of central Shanghai, although high costs have apparently discouraged some travellers.

Since 2004, this has become the world's fastest train in regular commercial service.

Also impressive was a visit to the Shanghai World Financial Centre, a super-tall skyscraper in Pudong, which includes not only the financial centre but the Park Hyatt Shanghai hotel, which occupies the 79th to the 93rd floors.

This 101-storey (474m high) building is the world's second highest building and the tallest building in the People's Republic of China, including Hong Kong.

"It's just incredible, " a member of the museum's Maori advisory committee, Alby Ellison said, as the museum delegation bus headed from the airport to a central Shanghai hotel.

He was also stuck by the way green farm areas were interspersed among some of the striding tall apartment tower blocks, power stations and other big buildings as the bus scampered on its way deeper towards the heart of the city.

"It's an impressive place. It's going forward. It's doing stuff, the sheer scale of its activity is just really impressive," Otago Museum Trust Board chairman Graham Crombie summed up the thoughts of many.

Mr Crombie later said the formal opening, with its Maori cultural performances, lectures and associated functions and meetings, had been "very, very successful".

A "hugely strong" relationship had been built up between the two museums over the years.

"What we're seeing now is a tipping point," he said.

The relationship between the two museums had moved to a higher level, and the display of the exhibition at the Shanghai Museum's number one gallery for the next four months would also bring wider benefits to Dunedin.

"It will add significantly to the relationship between Shanghai and Dunedin," he said.

Another museum delegation member, University of Otago Associate Prof John Broughton said there was an "exciting, vibrant" spirit about Shanghai and he was "having to come to grips with the fact that there's 23 million people living here".

"The architecture is so different, and it's beautiful."

One of Prof Broughton's tasks was to train 200 volunteer guides to introduce visitors to the Maori treasures at the Shanghai Museum.

The guides were subsequently doing a "remarkable job".

Experiencing the way Ngai Tahu Maori culture and Chinese culture with their respective "protocols and etiquettes" had been brought together in the exhibition and associated activities had been "really enriching", he said.

Otago Museum advisory committee chairman Matapura Ellison, who was involved in co-curating the exhibition, said the Te Ao Maori exhibition has been an "incredible journey".

"We have woven together three great strands to create an important and inspiring result.

Mr Ellison was "struck with the realisation" that the task of selecting the Maori works to be included in the show "had a level of complexity which included a significant spiritual dimension".

"To identify the appropriate ones to make their way to Shanghai, along with good supporting information, was a big responsibility shared among us, and I am confident that we have done this well.

"This exhibition is not only an opportunity to present Maori on a prestigious international stage, it has also been an opportunity to work even more closely with the Otago Museum, to better understand each other and to put our commitment to supporting each other into practice."

Otago Museum chief executive Shimrath Paul said that developing and staging the exhibition had been a "great responsibility".

The show had been "a formidable exhibition challenge" for the museum and a "great step forward" but had also involved working through all the cultural protocols both with Ngai Tahu locally and "with the expectations of our Chinese colleagues in Shanghai".

"It's been a complex project for our team, but we have embraced it and enjoyed it and learned a huge amount in the process," he said.

The exhibition was not only an Otago Museum activity, but was also a "great outcome for Dunedin City" and was growing the sister city relationship.

This was also "great outcome for New Zealand" at a country to country level, he said.

Yes, there are birds here, even in this huge Chinese city.

Someone, having also recently arrived from Dunedin, had earlier said: "I haven't seen any birds yet".

But this morning, jogging early down Ninghai Rd, near your hotel, a few minutes after 7am, you hear them first, calling excitedly to each other, high above, in the bright falling light, partly shaded by cloud.

And then you suddenly see them, about the size of sparrows, zapping past like bullets, at sharp angles and intersecting trajectories, but seemingly with no risk of collision.

They, like many things in Shanghai, also cheerfully partake in some of the unexpected paradoxes of the place.

Just when something has been popped into a convenient pigeon hole, the pigeon escapes, effortlessly beating its wings.

Later, as you are nearly finished stretching your legs in nearby Jinling Rd, you notice something slightly curious, at a newspaper kiosk, not far from the metro McDonald's outlet.

Well before the first crush of newspaper buyers arrives, the kiosk owner sits on a very low chair and shares some food with a friend, a uniformed city worker.

The owner eats some sort of of unleavened bread wrap, filled with what looks like lettuce and various other delicious vegetables.

They may be living in one of the world's biggest cities, but here, paradoxically, a life can also be built from simple gestures, even amid the enormities of scale and ambition.

Even in a global city, something of the village survives.

THE EXHIBITION
"Te Ao Maori: Maori Treasures from the Otago Museum" was the first exhibition of Maori artefacts from New Zealand to be displayed at a museum in China.

The collection of 337 artefacts includes fine pounamu (greenstone) items, including hei tiki, as well as a wide range of other taonga (treasures).

Shanghai has grown rapidly in size and importance over the past 40 years. It offers major cultural and trading opportunities for Dunedin, given the continued "blossoming" of the 17-year sister city relationship, in Dunedin Mayor Dave Cull's phrase.

SHANGHAI FACTS
• Shanghai, with a population of 23 million, is the most populous city in the People's Republic of China.
• Located in Eastern China, on the coast, at the mouth of the Yangtze River.
• Has grown rapidly over past two decades.
• Already one of the world's major financial centres, and aims to further develop its international shipping role.
• Also a popular tourist destination, and a key part of the booming mainland Chinese economy.
• Te Ao Maori, with its 337 artefacts, is by far the biggest overseas exhibition organised by the Otago Museum.
• The Shanghai Museum is one of the world's great museums, attracting more than two million visitors annually.

THE DELEGATION
The Otago Museum sent its largest-ever travelling delegation to Shanghai last week to accompany the opening of its biggest overseas exhibition: Te Ao Maori: Maori Treasures from the Otago Museum.

Through the museum's Maori advisory committee, the exhibition was developed in partnership with the Ngai Tahu manawhenua of Te Tai o Araiteuru, the Maori community of the Otago-Southland east coast region.

• John Gibb's visit to Shanghai was supported by a grant from the Asia New Zealand Foundation.