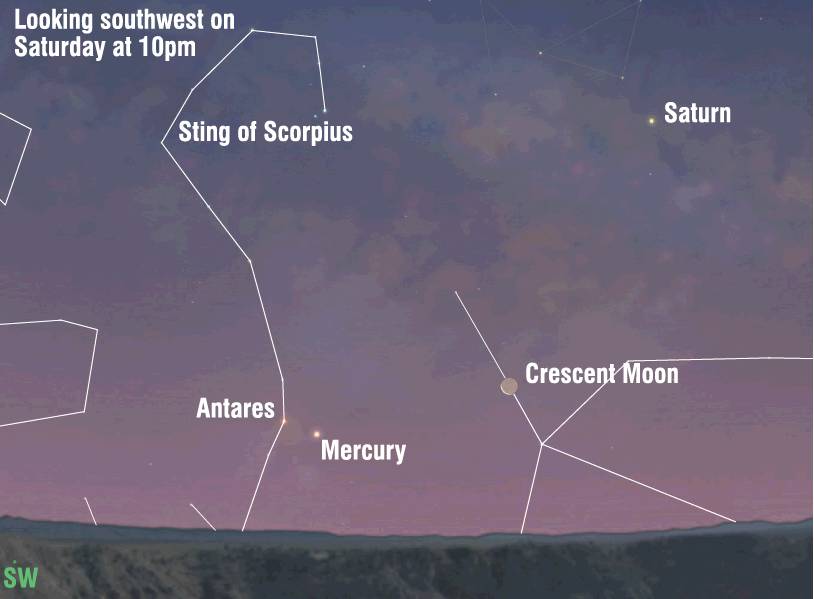 With daylight increasing as we head towards the summer solstice in December, the familiar winter star patterns are disappearing into sunset's vivid glow, writes Ian Griffin.

This week we have a chance to bid a fond farewell (at least for a few months) to one of winter's most prominent constellations, Scorpius. And to celebrate the Scorpion's slow sunset immersion, the sky gods have arranged for a fine feast of planetary action within its boundaries over the next few nights.

On Saturday, the moon will be just under three days past new. Weather permitting, it should make for a wonderful sight low in the southwest. At 10pm our closest celestial neighbour will be a smidgeon under 10deg above the horizon. Its thin crescent will be 7.6% illuminated and, as the sky darkens you should be able to detect the ''dark'' portion of the moon lit by ghostly earthshine.

Don’t you just love the falcate moon? Also I love the word falcate. So much it’s my word of the day! #falcate #moon pic.twitter.com/1i0q9gK3NV— Ian Griffin (@iangriffin) November 6, 2018

Once you have had your fill of the fabulous falcate moon, before it gets too late, make sure to turn your eyes to the left. If you have an unobstructed horizon, you should easily be able to spot the innermost planet Mercury, which is putting on a fine show at the moment.

In fact, Mercury reaches its maximum elongation from the sun today (Wednesday) and over the next few weeks it, like Scorpius, will be enveloped by the sunset.

On Saturday evening at 10pm, Mercury will be standing some 6deg above the horizon. Look for a fairly bright yellowish ''star''. If you have a telescope and point it towards the planet, with high magnification you should be able to observe that its tiny disc is half illuminated, resembling the moon at first quarter phase.

On Saturday, Mercury is 141,000,000km from us, and the light you see when gazing at the planet, travelling at 300,000km every second, has taken nearly eight minutes to make its interplanetary journey.

If the sky is clear and you have good eyesight it should be possible to spot the star Antares less than 2deg away from Mercury.