Getting out of your depth 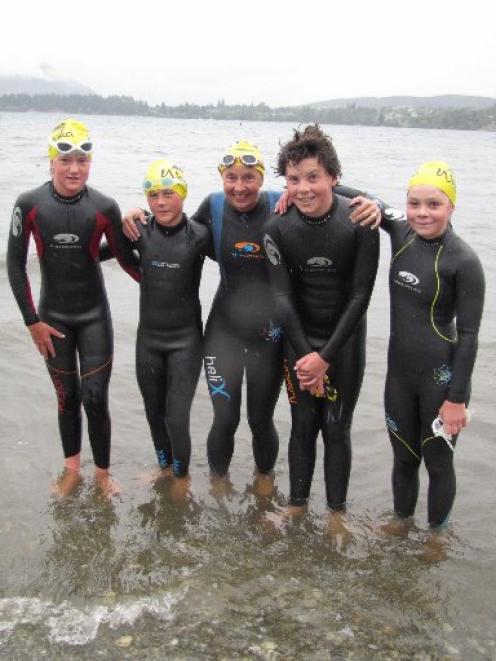 Wanaka swim coach Fi Hezinger (centre) with (from left) young swimmers Janus (12) and Julius (10) Staufenberger and Callum (13) and Breagha (11) Rennie. Photo by Marjorie Cook.
When people learn I've taken up open-water swimming, some immediately recoil, declaring it is something they could never do. I agree it's scary. But with practice, I'm learning to conquer it. Marjorie Cook reports.

Competing in an open-water swim or triathlon is on many people's bucket list.

But sometimes the chaos at the first swim buoy feels as if a shoal of angry fish wants inside my wetsuit. And sometimes my wetsuit tries to strangle me or bite my head off.

Often, cold water and waves is enough to cope with.

So when I read about swimmer deaths, I always hope it's not me who next kicks the bucket.

Deaths there are. A man died in a swimming race in Lake Taupo recently; a triathlete suffered a heart attack during the swim leg of Challenge Aarhus in June last year; another triathlete died in a canal at Challenge Roth a month later; and two swimmers died from heart attacks in the New York Triathlon last August.

The main study on the subject was published in 2010 by Dr Kevin Harris, of the Minneapolis Heart Institute.

He looked into deaths at US triathlon events over a period of two years and revealed 13 of 14 athletes who died were swimmers (the 14th died in a cycling accident.)

Victims were mainly men, aged between 28-55 years, and deaths occurred over a variety of distances. Autopsies revealed most died from cardiac issues.

The role of cold water and adrenaline as a cardiac event trigger has been discussed, as has stress.

But coaches and health professionals say, on balance, swimming and participating in triathlons are beneficial to heart health, triathlons particularly so, because of the cross-training benefits.

The main message seems to be that swimming (and triathlons) are not dangerous, so long as athletes prepare, look after themselves, know their heart health and don't freak out in open water.

Hezinger has a degree in physical education and sports psychology from the University of Otago and is a competitive swimmer and former surf lifesaver.

She advocates physical and mental preparation to protect yourself and have a fun swim.

The first thing is to acclimatise to the cold.

"One of the things I've learned from experience, both from watching other people and for myself, is when you get that cold shock and you are sucking in air.

"That is a natural instinct from cold shock and it is similar to the symptoms of a panic attack, gasping for air.

"So your brain tells you [that] you are having a panic attack. But the gasping is a physiological effect, not a psychological effect

"That's the biggie I've learned over time. Control your breathing to get over the panic.

"So I tell my athletes, you have to get in there before you do the race and get over that cold shock, get over the gasping, get over the ice-cream headache. It is not safe to go out and swim without controlling that," Hezinger says.

Tricks for acclimatising can include taking a flask of warm water to a race and tipping it into your wetsuit.

One woman I know once raced with a skin-tight merino top on under her wetsuit - although that was a mistake. She'd forgotten to take it off.

I acclimatise by getting in the lake early, about October, when the snow melt is filling Lake Wanaka. I might last only a minute then, but by December, the lake feels appreciably warmer and the shock is not so bad and I can stay in much longer.

Hezinger reminds her athletes breathing out is the key to relaxing.

"Make sure when you put your face in the water you breathe out and relax. Then turn your head and breathe in." She also advocates taking time to extend your limits.

"Test yourself out of depth slightly, not a huge way, then come back in and check with yourself. Push your limits just in small little bits at a time rather than expecting yourself to do this huge, big thing," she says.

Hezinger also teaches her squads to cope with mass starts and going round buoys during normal training, both in the pool and in the lake.

Tips for starting include avoiding the front, going wide and swimming slowly.

The accumulation of experience helps everyone and it can take some swimmers a long time to overcome fears.

Hezinger says some swimmers may be a bit blasé about their own skill level.

"It is not a matter of how good a swimmer you are. You can still drown," she says.

Hezinger knows this lesson only too well.

Many years ago, in a surf lifesaving competition, the wind blew spray into her mouth while she was sighting a buoy in a wave, her vocal cords tightened to protect her lungs from an invasion of water and she could not breathe.

She "dry-drowned" but had enough time to stick her arm in the air. The swimmer next to her and the event's safety team saved her.

From what Hezinger understands of "dry-drowning", it takes about four minutes for the vocal cords to relax, before breathing assistance can be given. In that time, the swimmer loses consciousness.

"It was pretty freaky. It taught me a lot and it definitely taught me you should never swim alone. It can happen to anyone," she says. 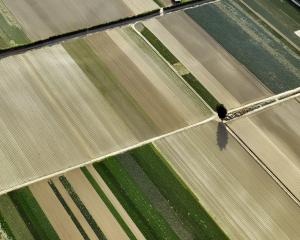 Fresh out of produce