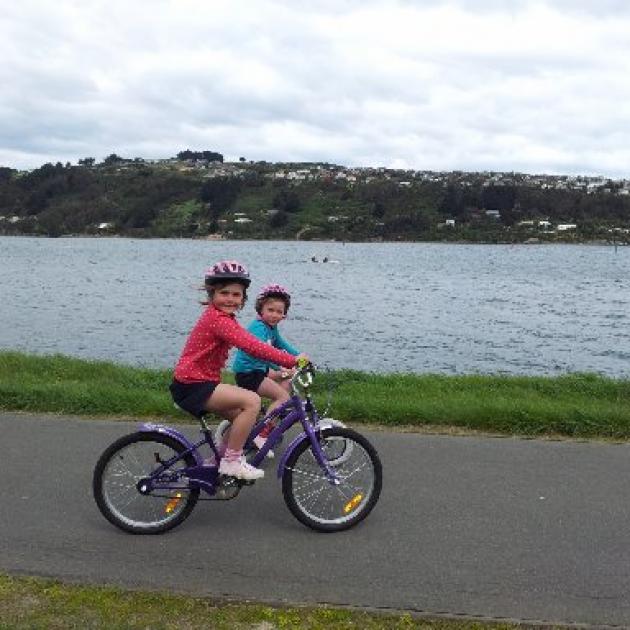 Sisters Georgia (then 6) and Matilda Hall (then 5) enjoy a ride on the West Harbour cycleway in 2013. They learnt to ride on the track and still enjoy going back for a pedal, now on bigger bikes. Photo by John Fridd

Dunedin now has a spectacular 12km bike ride around the top of Otago Harbour, from St Leonards to Vauxhall. Part of the top section is on quiet upper port roads, but the rest is on shared paths gradually built around the upper harbour. They can now be linked together to create one big ride. John Fridd gets on his bike.

I started my ride at St Leonards, just over SH88 from the bottom of Moa St. The trail is a ribbon of seal beside the railway and Burkes St Leonards Boating Club.

Before you take off on your bike, take the time to look around. Down the harbour, Roseneath peninsula, Goat and Quarantine islands seem to float above the sparkling harbour, across which the familiar pyramid of Harbour Cone pierces the sky and Macandrew Bay basks in the sunshine.

Remember, on this track you can encounter walkers, runners, skateboarders, people in wheelchairs et al; this is a shared path and bikes don't necessarily have right of way. Off we go, towards the city on a smooth surface that makes biking easy.

Over a small rise lies the first inlet. Vehicles have to skirt the inlet following SH88 but we stay beside the railway line and arrow straight across, with water on both sides. In the middle the track crosses a small bridge, which spans the inlet's outlet.

Take your time when you cross the inlets - you never know what you'll see. One day I wondered why a knot of people were staring out into one of the inlets. I discovered they were following the progress of a large octopus thrashing around on top of the water.

Seven-gill sharks also cruise into the inlets during summer. Pass Maia and keep heading towards Forsyth Barr Stadium and the city. Soon you'll come to a railway crossing, surrounded by a gate arrangement designed to slow you down before you cross.

There are no bells or lights here, so have a good look up and down the rails and keep children close.

The last section of cycle track/walkway has some nice little wiggles to make riding more interesting before it suddenly straightens out at the end of the West Harbour Cycleway; 5km knocked off, just 7.5km to go.

Notably, the banks above the Ravensbourne section of the track are looking a little bare at present as contractors have been laying waste to the wilding sycamore trees which were choking any spare ground they could find. The resulting void will reportedly be filled with native plants.

After the railway crossing you're riding beside the harbour, enjoying a stunning view. At weekends there's usually plenty of action on the water, whether it's a sailing regatta or rowdy teams paddling dragon boats.

On this section you also sometimes see a ship unloading rock phosphate (mostly from Morocco) and sulphur (mainly from Canada) to be turned into superphosphate fertiliser at the Ravensdown plant beside the track.

From the end of the track, ride through the boat harbour area, past the aquatic recreational buildings and a big boat storage yard.

Stay on the main access road to the end, thread through the bollards and turn right to pass under the rail and road bridges. On the other side the track turns hard right and heads up a ramp.

Here you can peel off to visit the Plaza Cafe at the front of the stadium if you want a coffee break or carry on up to the walkway/cycleway over the SH88 Water of Leith bridge.

On leaving the bridge, turn hard right at the bottom of the ramp and find your way down to another underpass, which takes you back beneath both bridges. Then take another hard right to get on to the excellent new 450m link track to Wickliffe St.

When you ride through the boat harbour precinct, look left for Kuri Dog, an intriguing 2008 artwork by Stephen Mulqueen.

Also marvel at the $224 million Forsyth Barr Stadium, billed as the world's only fully roofed, natural turf stadium. I'm shelling out $138.33 per year in rates to pay for it, so I attend as many events as possible, trying to get my money's worth.

When you reach Wickliffe St, turn left and immediately hang a right on to Fryatt St and slot into the wide cycle lane which takes you through the upper port area. You're now on a public street so watch for traffic, although it's usually quiet at weekends.

At the Monarch tourist boat headquarters and adjacent Harbourside Grill (formerly the Customhouse) cafe/bar turn left and ride down the ramp on to Custom House quay public wharf, popular with fishers.

Leaving the public wharf, turn left on to Birch St and continue hugging the upper harbour as you head down the harbour for a few hundred metres. The street swings around to the right and becomes Kitchener St, taking you past harbourside facilities and businesses.

Where the street swings right to join Wharf St watch for a path winding through a small harbourside park, past Watercooled Sports. At the Habitation building, take this track and ride across to the tooth sculpture.

Last year, while riding down Fryatt St, I spotted Sea Shepherd's protest boat, Steve Irwin, which had called at Dunedin to refuel before sailing back into the battle for the whales in the Southern Ocean.

The ‘‘molars'', rooted beside Portsmouth Dr by artist Reg Gentry, have to be Dunedin's most controversial public artwork.

They seem to get uglier every time I bike past them (am I being churlish when I compare them with the exquisite sculptures I saw in Florence last year?) but I guess they get people talking, one of the aims of public art. At the molars, turn left on to the Portsmouth Dr bike/walking path.

One of Dunedin's original bike paths, this is always a delight, the harbour sparkling on a fine day as you pedal towards Andy Bay. When you reach the 3-D Peninsula map, stay on the path and head across the Andersons Bay inlet.

On the other side, stay on the track and go past the boat sheds on Portobello Rd. When you reach the Vauxhall Yacht Club, carry on and take the new bike/walking path which curves around the bay past the White House.

Just around the corner, the track ends abruptly and your 12km ride is over - or you've reached the halfway point if you're riding out and back.

Pause on Andersons Bay causeway to take in the view across the harbour to the central city. The CBD hugs the harbour beneath hills studded with houses and trees and, beyond, Signal Hill and Swampy tower over it all to create a stunning vista.

The causeway also has its share of fishing action - I once saw a fisher battling something big so I stopped to see what was on the other end of his line.

It turned out to be a large stingray and because of its venomous barb the fisher wasn't sure what to do with it. He was still trying to decide what to do when I pedalled off.

The main point of interest on the final section is the old White House (original name: the Dandie Dinmont) at the foot of Doon St just past the yacht club.

William Larnach had the eight-bedroom house built in the 1880s and stayed here often on his way out to the Camp to check on progress on Larnach Castle, which was being built then. In recent years, the White House has been weatherproofed and had its ‘‘bones'' strengthened in a major renovation.

How long will the entire ride take? I can knock off the 12km in 40 minutes flat on my mountain bike, so most of you should be able to beat that, as I'm a slowcoach!

And finally: While biking with four or five others on the Vauxhall cycleway I saw a perfect example of how the trails help motorists as well as cyclists.

Just over the rock dividing wall, a middle-aged rider was punching into the wind on Portobello Rd on his 10-speed, doing about 20kmh.

Trapped behind him, no doubt gnashing their teeth and muttering expletives under their breaths, were half a dozen motorists. Come on riders - use the cycleways!