Hart showed 'the power of protest' 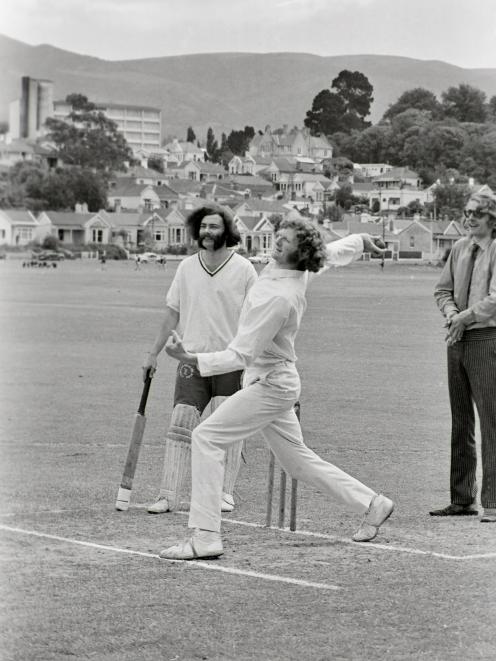 Looking back, I am surprised by how well-mannered and polite we were at the beginning. After major demonstrations we wrote to the police and thanked them - I am not quite sure why. In the very early days, we tried to change public opinion through the power of reasoned arguments. If this could be done with added theatre, so much the better. In late 1971 we were campaigning to stop the New Zealand women's cricket team from touring South Africa. The media seemed uninterested in the story. In Dunedin we rounded up anti-apartheid cricket enthusiasts, including New Zealand right-arm fast bowler Murray Webb, and staged a (very) limited overs match between an [ANC president-general] Albert Lutuli Memorial XI and the Invitation Non-Racial XI. Dunedin media covered the story. The tour proceeded.

Q Did you receive a lot of threats?

There were late-night phone calls with heavy breathing and threats to blow up the house. There were anonymous letters promising much nastiness and there were physical assaults. On a BA flight in 1977 between Dar es Salaam and the Seychelles, returning home from a three-month contract with the United Nations in New York, a drunk New Zealand passenger walked up to my seat, grabbed me by my hair - there was quite a lot of it in those days - pulled me out of my seat and started yelling, "Traitor. This man is a traitor". More than 40 years after this incident I am still nonplussed by the man's crassness and arrogance.

Very. "Get a job", "You're all anti rugby", "Commie w***er" and "Get a haircut" were very common. The hair thing was probably the most common. Long hair was part of the baby boomers' rebellion, part of the late 1960s political activist's "uniform". But for those who were politically conservative and supported rugby tours with South Africa, long hair was a symbol of everything they hated.

Q It was suggested by some that Hart was funded by the Russians. Where did your money come from?

The Russian allegation came from people who could not comprehend that any New Zealander would possibly want to support us. Therefore, it had to be the Russians. Hart was supported by lots of small donations from many New Zealanders. In the early years, when Hart couldn't afford to pay me a salary, my Indian doctor set up what he called "The Trevor Richards Survival Fund". He was its principal donor.

Q Many New Zealanders know about the protests during the 1981 Springbok tour. When did opposition to South African rugby tours begin?

Almost 100 years ago. In 1921, on their first visit to New Zealand, the racist attitudes of the Springboks so incensed Maori that it soured their attitudes towards the Springboks for more than 60 years. Between 1928 and 1970 there were seven tours involving New Zealand and South Africa, and each one of them faced opposition.

Q What were Hart's biggest campaigns?

In 1976, at the same time as South African police were shooting and killing protesting school children, the All Blacks toured the republic with the personal "blessing and goodwill" of Muldoon. An international uproar ensued. Twenty-eight mainly African countries walked out of the 1976 Montreal Olympics in protest at New Zealand's presence. Following the boycott, Hart's close relationship with African governments led to the treason allegation - somehow the Montreal boycott was all our fault!

Q What does Hart's history tell us?

Fourteen people established Hart in 1969. Over two decades, as Hart's support grew, it helped a nation to change what it thought about itself. Hart's history demonstrates the power of protest, the positive impact protest can have.