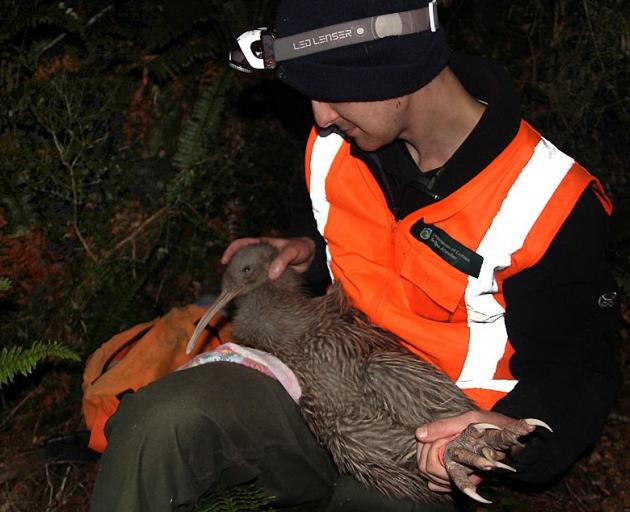 A new female Haast tokoeka gets a health check by Luke Easton. Photo: Heath Sinclair
The dense beech canopy scatters moonlight across the forest floor as we stand among the shadows, listening intensively.

After trudging through bogs and streams all night, our wet feet are biting with cold. I notice the silhouette of the person nearest me begin to shiver as a cool breeze sweeps down from the glaciated mountain tops; yet still we wait. I can hear a possum, along with the faint calls of kea and kaka from across the river valley, but there is no sound of what we are after, if they are here at all.

The leader of our group, Department of Conservation ranger Heath Sinclair, uses his dog whistle again to imitate the shrill cry of a male kiwi. Ten minutes later, there is a response - a guttural call of a female kiwi, about 200m away.

My heart is racing as Heath whistles again, enticing the female to come closer. It does - we can now hear the rustling of crown ferns ahead of us, followed by another call. As soon as we hear its footsteps, we turn on our head torches to spot her in the red light.

Heath lunges forward, carefully scooping up the kiwi by her legs, and cradles her in his arms.

We crowd around, excited at the significance of this moment - this is the first time Haast tokoeka have been caught in this area.

Haast tokoeka were historically abundant and widespread in Te Wahipounamu/South Westland, but the core population is now restricted to the northern Haast Range (established as the Haast Tokoeka Sanctuary in 2001), and is sparsely distributed in parts of the nearby Olivine and Selbourne Ranges. 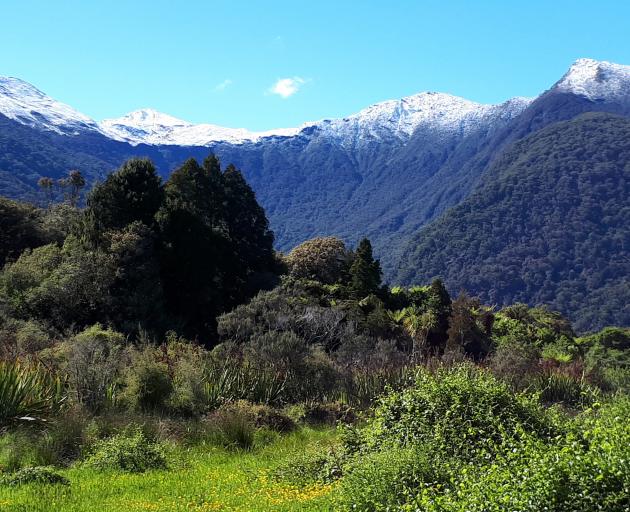 For years, Doc has focused on surveying outside the sanctuary via audio recorders and active searches at night. The purpose of these surveys is not only to gain a better understanding of their distribution and population size, but also to maintain genetic diversity among the fragmented and isolated populations of Haast tokoeka.

This is because genetic diversity is necessary for populations to adapt to environmental changes and enhance immunity during disease outbreaks. Genetic differences among Haast tokoeka populations have been driven by glaciations for millennia, with populations surviving in many small, isolated refuges.

Nowadays, populations are mainly isolated by major tributaries that flow down broad, undulating valleys carved by the ancient glaciers.

However, there is little genetic diversity within each of the known populations of Haast tokoeka and, based on poor hatching success and survival of eggs and chicks (those that are not predated on by mammalian predators), likely suffer from inbreeding depression (i.e. lowered "fitness" due to mating among relatives).

Removing eggs and chicks from multiple geographical locations via "Operation Nest Egg" (One, which is the rearing of chicks in predator-free creches until they are large enough to fend for themselves when returned to the wild), offers the best chance to mitigate against inbreeding and further losses of genetic diversity.

This is achieved by releasing juvenile kiwi from separate locations in "mixed" groups, in the hope that subsequent breeding pairs will produce offspring that have inherited genes from different origins. 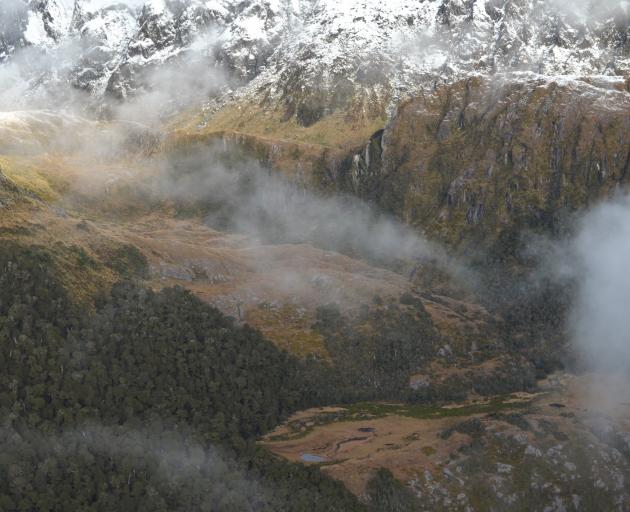 Part of the Haast Range, Mount Aspiring National Park. Photo: Blair Hoult
Orokonui performs a critical role in this process. A population of mixed origins has become established following the release of 21 juvenile Haast tokoeka from 2010-12.

Assuming these birds have bred since then, Orokonui-born kiwi could represent a relatively diverse gene pool important for the long-term survival of this taonga.

Since 2015, Orokonui has also significantly increased the success of One for Haast tokoeka by providing a creche for chicks.

As more surveys discover new adult kiwi to monitor in the wild, and their chicks are transferred along the chain of creche sites in Orokonui and Fiordland before returning home, there is great potential in replenishing the genetic diversity of this rarest kiwi.

This cycle, however, depends on finding new breeding birds. This becomes apparent to us as once Heath attaches a transmitter and releases the female kiwi, we continue to survey the river terraces to no avail. We travel further south over the following two nights but return to camp empty handed. It is disappointing, but in order to save the Haast tokoeka from extinction, the search must go on.

• Note: Since Luke wrote this story Conservation Minister Eugenie Sage has announced that further tokoeka, at least 16, have been found and transmitters attached to six of them.

After completing a PhD at University of Otago, Luke Easton worked for Doc as an intern with the Haast tokoeka recovery programme. He has since been appointed as a ranger in Te Kuiti.