Historic caves have story to tell 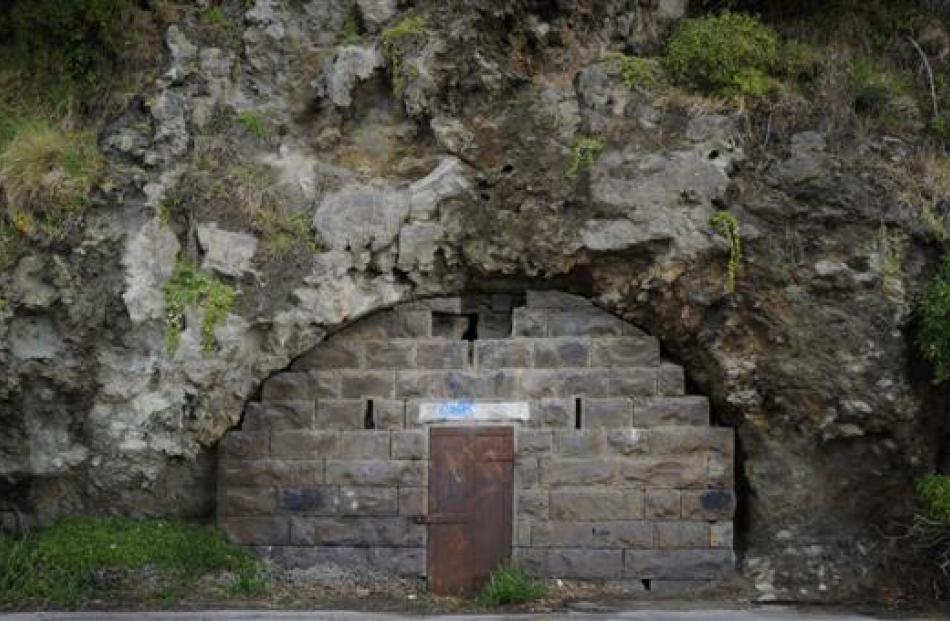 A locked door beside Portobello Rd, near the beginning of Otago Peninsula, leads to a cave once used to store explosives, and now used for storage of a different kind. Photos by Gerard O'Brien. 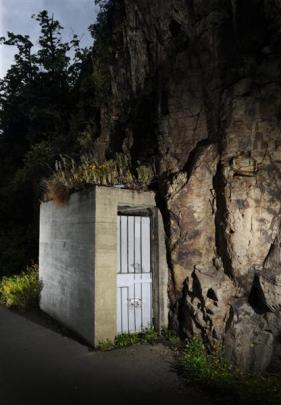 The door to a cave used for explosives storage more than a century ago, during the blasting of Bell Hill in the heart of Dunedin, can still be found beside the busy one-way Cumberland St. 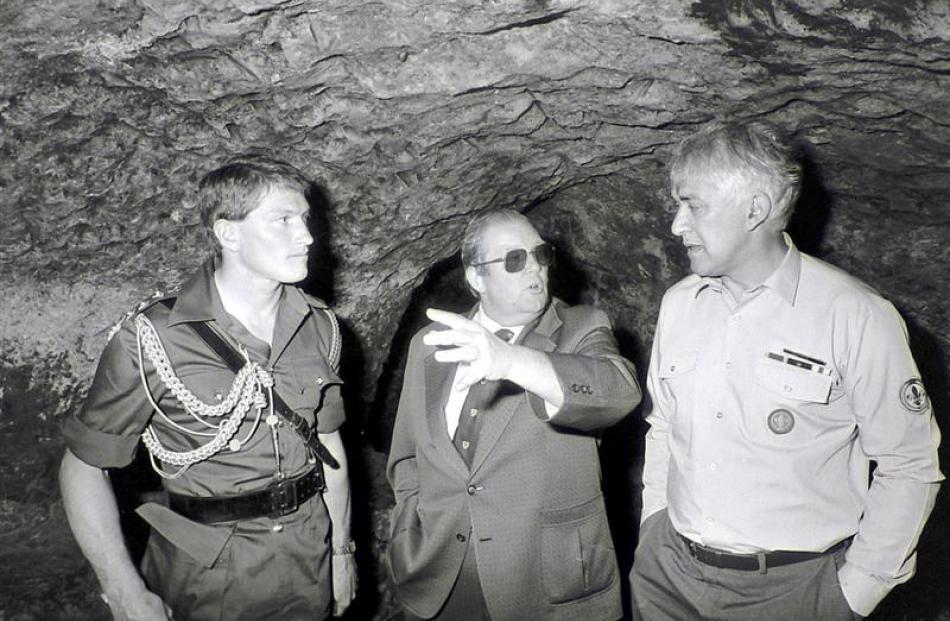 Former governor-general Sir Paul Reeves (right) inspects the chamber behind the Shore St door during a visit in 1986. 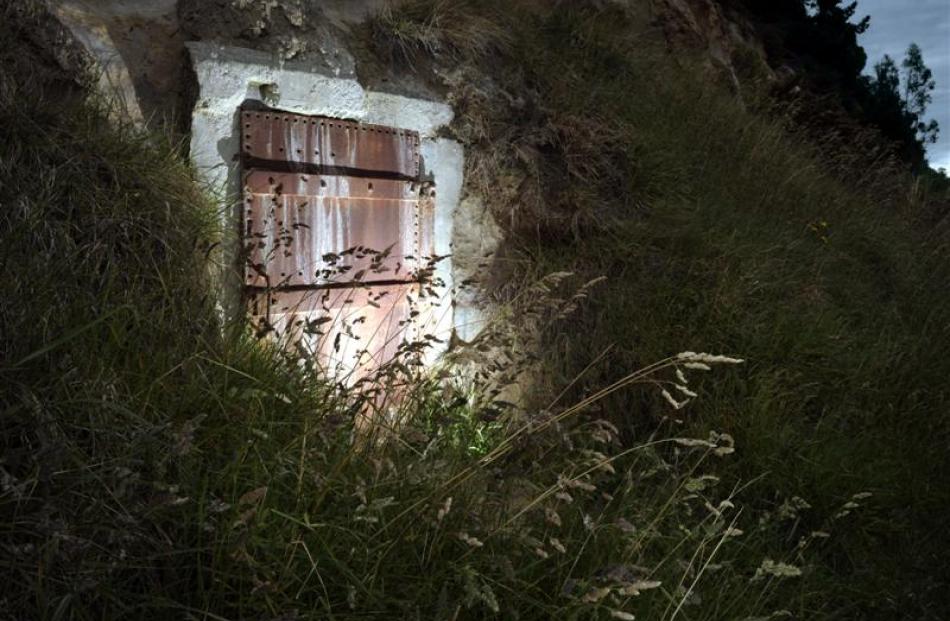 A rusted door embedded in a Dunedin cliff beside Shore St protects a short corridor leading to an underground chamber, inside which Maori prisoners were said to be held.

Dunedin's history can be seen in its towering church spires, but also found hidden behind small doors. Chris Morris explores.

A collection of rusted metal doors in Dunedin seem all but forgotten, except for the padlocks that seal them firmly shut.

But try the doors and the stories eventually come tumbling out, along with disagreements over the past that continue to reverberate.

One door, turned red from exposure to the harsh harbour elements, can be found in the cliff south of the Andersons Bay inlet, beside Shore St.

Another leads into the cliff beside Portobello Rd, on the opposite side of the inlet at Vauxhall, near the beginning of Otago Peninsula.

A third enters the cliff below First Church, as cars and trucks whistle by on the busy one-way Cumberland St in the central city.

Visitors to all three are greeted by locks that refuse to budge, allowing only stolen glimpses of the black voids inside.

But, according to Dunedin art historian and writer Peter Entwisle, all three doors should be celebrated for their links to the past.

He told the Otago Daily Times the doors opened into caves he believed were built as powder stores for large public works projects in the 1860s-70s.

The caves either side of the Andersons Bay inlet were said to store explosives during the construction of the causeway bridging the inlet in the 1870s, he said.

The central-city cave was used in a similar fashion when Bell Hill - now home to First Church, but once an early obstacle restricting access between the Octagon and the Exchange - was being lowered by "terrific blasting" between 1862 and 1867.

The blasting also removed a section of the hill extending to Otago Harbour, making room for what is now the city's one-way Cumberland St, where the cave and its locked door can still be found.

The door remained on First Church land, but nobody from the church was willing to discuss its history or use with the ODT.

A staff member said there were "some great romantic myths that go round the city" about the door, but it was simply used for storage and publicity would only encourage vandalism.

Mr Entwisle said the cave, after being built to store explosives during the blasting of Bell Hill, was later converted into an air-raid shelter - one of several in the central city - during World War 2.

Along the waterfront from the cave-turned-bomb shelter, the door at Vauxhall opened into a cave also used for storing explosives during the causeway's construction, he said.

It was ringed by a layer of harder rock added for extra strength and security at the time, he said.

The cave was now the responsibility of the Dunedin City Council, which leased it out as a storage site, council community and recreation services manager Mick Reece said.

Perhaps the best known of the three doors lay on the opposite side of the inlet, leading into the cliff beside Shore St.

It, too, opened into a cave, but also reopened a simmering debate between historians - stretching back to the 1980s - over what really took place inside.

That was because of the area's links to Maori prisoners taken from Taranaki and forced to labour in Dunedin between 1869 and 1881.

The Maori prisoners came in waves, with the first group of 74 - known as the Pakakohe group - sent to Dunedin in 1869 after Titokowaru's War, an armed dispute in the mid-to-late 1860s, sparked by land confiscations in south Taranaki.

Historian Bill Dacker, of Dunedin and Beaumont, said it was this first group that was put to work helping build the Andersons Bay causeway and road, with Pakeha convicts also used on the project.

The Maori prisoners also worked on other city projects, including the Dunedin Botanic Garden's stone walls and the city road eventually named after them - Maori Rd.

They were eventually followed by 137 of Te Whiti's "ploughmen", also from Taranaki, who were detained without trial after peacefully resisting European occupation of confiscated land and brought to Dunedin in 1878-79.

The prisoners were held at Dunedin prison and transported to work sites, but 21 died during their time in Dunedin and were buried in unmarked paupers' graves in the Northern Cemetery.

The death toll included 18 of the 74 prisoners put to work at Andersons Bay, which was "a very significant casualty rate in anyone's army", Mr Dacker said.

Their story has been commemorated, most recently with a memorial stone unveiled at the cemetery in March.

The Rongo stone memorial to their story was positioned on the grass reserve next to the cliff beside the Andersons Bay inlet, and just a few metres from the door into the cliff. It was unveiled in 1987 following a hikoi to Dunedin by descendants of the Taranaki prisoners.

However, more than a century on from the prisoners' release, Mr Dacker and Otakau runanga chairman Edward Ellison remained at odds with fellow historian Ian Church over the story behind the cave and its door.

Mr Ellison said oral accounts passed down through his family told of the prisoners being "housed from time to time inside that cave".

"I don't think it was overnight - we don't know - but it was utilised anyway by those prisoners and the guards.

"We believe they might have been put in there in inclement weather, or lunchtime, or whatever ... they weren't just crammed in there and the door shut for two weeks."

However, more extreme stories circulating in Taranaki about the treatment of the prisoners inside the cave in Dunedin had grown over the years to be "bigger than Tarzan", he said.

Those stories were "not quite correct", but reflected the "extreme emotion" surrounding the site for descendants.

"So there's been efforts to try and modify, or help them understand, what the cave was used for."

It was not clear when the cave fell into disuse, but it had been overgrown and hidden from sight for many years, he said.

Mr Dacker, who has written extensively about Maori history in Otago, was among those who helped uncover the cave.

In the 1980s, he was asked by George Ellison - Edward Ellison's father - to look for the door, but vegetation and a rockfall covering the entrance prevented him from locating it.

However, shortly after Mr Dacker happened to drive past as city workmen were clearing scrub in the area.

"You could see, sticking out of the top of the rubble, a square of a metal door," he said.

The door was eventually revealed and able to be opened for the Taranaki descendants travelling to Dunedin, and had "a huge emotional impact".

No records had been uncovered showing why the cave was built, but it was believed it had been constructed for storing explosives, he said.

"But what is clear is it did become a cell."

Mr Dacker was among those to have entered it - one of five trips he has made inside. He described a small corridor behind the solid door, leading into the cliff and then opening into a single chamber.

A bench running along one wall had been carved from the stone inside the chamber, as had nooks to hold candles around the room.

A breathing pipe ran under the heavy iron door to the outside world, and a circular cubicle had also been carved into one corner of the chamber.

In the centre of the cubicle was a large iron stake "firmly embedded in the stone". It was, according to Mr Dacker, "like a prison cell inside".

"You go into that places and it sort of breathes. Everything about it says that this is a prison cell," he said.

However, Mr Church said his studies showed the stories of the cave's use by prisoners lacked one thing - evidence.

Historic accounts showed the prisoners were housed at Dunedin prison and transported to and from the site each day, and there was no evidence the cave ever housed prisoners.

The Waitangi Tribunal had also addressed the issue in the past, concluding there was "no evidence either for or against" the use of the cave as a prison, and Mr Ellison's oral history accounts were "hearsay" and "pretty vague", he believed.

"Nobody that I know of has got any evidence whatever that the prisoners were ever in any cave, anywhere, at any time. It's all pure conjecture."

He doubted the caves were even those built in the 1800s to store explosives during the causeway's construction.

The area had been blasted away during construction of the causeway to obtain the rock needed to build it, and quarried around the time of World War 1, meaning any original caves would have been lost.

"If there were caves there in 1870, when they did the work, then those caves are no longer there."

Mr Dacker agreed blasting and quarrying had occurred in the area, but wasn't convinced blasting would have destroyed the caves or sure exactly where the later quarrying took place.

"It's entirely possible - I think more than likely - that it could have all occurred at the same time.One doesn't exclude the other."

The cave's interior was also "absolutely nothing like" that found on the opposite side of the causeway, at Vauxhall.

He believed the Shore St cave was the original, and had been used as a temporary "prison facility" to hold the prisoners for short periods.

No records had been found showing how often, for how long or for what reason prisoners might have stayed inside - but the iron stake embedded in the floor of the cubicle inside posed a question, he said.

"What was it used for? There's not many possibilities actually for this particular artefact, the way it is, except for having people chained to it," he said.

He believed the door and the cave behind it were "really important" to the history of Dunedin, New Zealand and the story of Maori-Pakeha relations, and deserved greater recognition.

"It's a very visible and palpable connection between those events of that time."