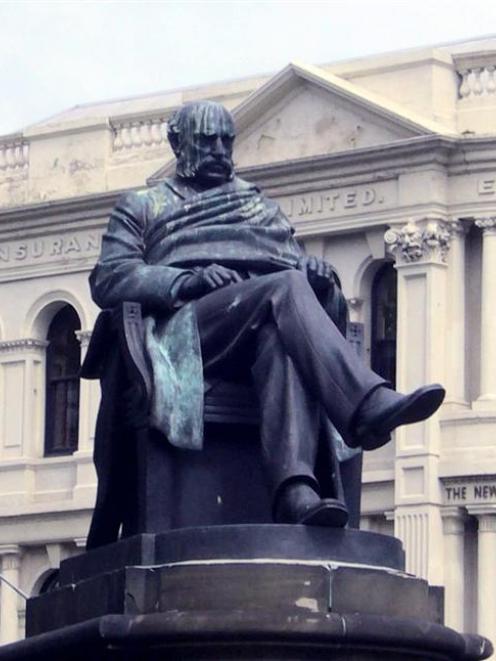 Statue of the Rev Dr Donald Stuart in the Queens Gardens. Photo supplied.
The contrast between a loved and respected public figure and the private angst of his tragic family life makes a strong theme for Richard Huber's play written to celebrate Knox Church's 150th anniversary.

The church's first minister, Donald McNaughton Stuart, nurtured the family structure of community life, but at the same time his own family fell apart drastically and he found that difficult to deal with, according to Huber.

Voice of Heaven is not the first play written about this remarkable man who was so influential in the early Dunedin community.

In 1998, Simon O'Connor wrote Stuart for the sesquicentenary of Otago, the settlement founded by the Free Church of Scotland.

"Simon had already covered Donald McNaughton Stuart well in his marvellous play so I was looking for another angle, and chose to focus on the relationship between Dr Stuart and his wife, Jessie," Huber explained.

When the Stuarts arrived in Dunedin in 1860, Jessie was ill and had to be carried from the boat in a chair.

The first thing she was given was fresh strawberries and cream.

"I was struck by that image, that after such a long sea journey you arrive at this extremely foreign place, you are sick and you have three small children, and people give you nature's bounty."

The relationship between Dr Stuart and his wife had a rocky beginning.

They met while he was teaching in England, but Jessie Robinson's mother refused to allow them to marry unless the young Stuart changed to Church of England, according to Huber.

He refused, and returned to Scotland to train as a Presbyterian minister.

Mrs Robinson died a couple of years later, and the two were able to marry, but Jessie remained an Anglican.

"I get the sense that his early experience of having to deal with the problem of his wife's religion, even though he wouldn't change his own, helped inform his liberalness of mind," Huber said.

However, reflecting on their relationship many years later, Dr Stuart felt a deficiency in his feelings for his wife.

He loved her in the sense that she was a good person and good company, and would make a good Christian wife, but he felt he lacked the feelings of a romantic or poet, Huber said.

Her sister Isabella came out to look after the three boys, but she also died a couple of years after arriving here.

The boys were brought up by Margaret Hedley, the housekeeper who came with the Stuarts, but she drank heavily.

"One son committed suicide after a career of alcoholism, and another died of natural causes probably brought on by drink. His eldest son, William, married Amy Jones, the daughter of Johnny Jones, a leader in the community, but she ran away with another man, leaving him with a son to look after. He dumped the son on Donald's doorstep and ran away to Australia.

"William did remarry eventually and came back to take on family responsibility," Huber says.

Dr Stuart felt that what happened to his sons was because they didn't have a mother, but he stopped short of implicating his own workaholic nature and not being home enough as the problem, Huber says.

Besides being minister of Knox Church and all it involved, Dr Stuart tutored at the newly founded theological college, was chairman of the Otago boys' and girls' high schools board, and was involved in the establishment of technical education and the university, of which he was vice-chancellor and later chancellor.

To stage the play in the church, Huber has adopted a minimal theatrical style because it suits the nature of the Presbyterian approach to worship, he says.

"One of the big things with the Presbyterian approach to worship as it developed in Scotland before it arrived here, is it's anti-ritual. I get the sense it was trying to be a very honest, person-centred, direct approach to religious experience.

"As a theatrical parallel I've tried to strip it back to something simple and direct with lack of obvious drama. It's the voices and the words of the performers that really matter."

Thursday, June 3 and Friday, June 4:
8pm: Voice of Heaven by Richard Huber will be performed at Knox Church, directed by Clare Adams, with Karen Knudson as musical director and featuring Simon O'Connor and Barbara Power.

Saturday, June 5
10.30am: Launch of They Continue in Faith, the new Knox history book, at Knox Church.
6.30pm: Dinner at the Hunter Centre, cnr Great King and Frederick streets.

Sunday, June 6
9.45am: Communion Service with Presbyterian Moderator The Right Rev Dr Graham Redding. Governor-General Sir Anand Satyanand will attend.
7.30pm: Mozart's Requiem will be performed by the choirs of Knox and St Paul's Cathedral, and friends, with David Burchell at the organ and the combined choirs and orchestra conducted by Karen Knudson.