Life and death of sanctuary kiwi expressed in beeps 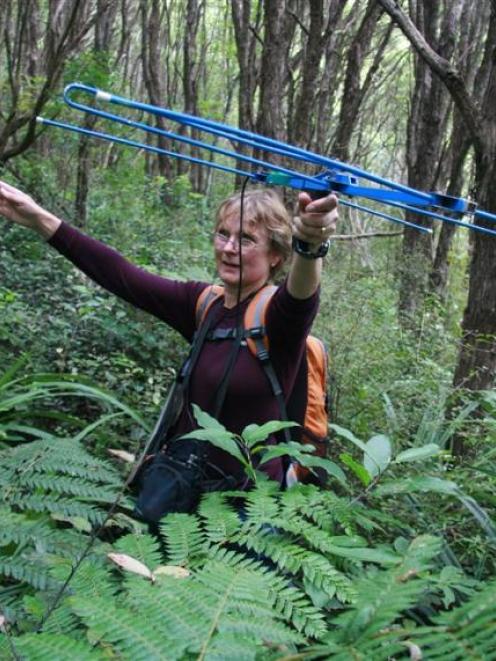 Valerie Fay listens for kiwi signals at Orokonui. Photo by Neville Peat.
In the first of a regular monthly column looking at life in the Orokonui Ecosanctuary, Neville Peat talks to Valerie Fay about searching for kiwi.

Just on 140 years after the last wild kiwi were heard calling in the Dunedin area, Valerie Fay routinely listens out for them at Orokonui Ecosanctuary.

Actually, she tunes in to their electronic transmitter beeps during the day, when they are asleep in unmarked dens somewhere in the 307ha, 3km-long haven for wildlife above Waitati.

Behind Orokonui's predator-proof fence, the young Haast tokoeka have the run of the forested valley. Eight of them were released last October, a satellite breeding population in the making for the rarest and most vulnerable of the six kinds of kiwi.

Valerie is a leading volunteer at the ecosanctuary and is more commonly seen organising the revegetation programme. She reports to Orokonui's conservation manager, Elton Smith.

On her kiwi-monitoring rounds she carries a receiver, earphones, map and fieldbook. Although she keeps to pest-monitoring tracks - more than 90km of them have been established - she is ready for a close encounter with the forest understorey. There are scratches on her bare legs.

Each of the young tokoeka carries a lightweight transmitter set at an individual frequency. Its beeps are picked up by metal antennae resembling an old-style television aerial.

The protocol with the Department of Conservation, which arranged the transfer of the kiwi in partnership with Maori guardians, or kaitiaki, in South Westland (Makaawhio) and Karitane (Kati Huirapa), requires monitoring on a monthly basis.

"They're young birds, never in the same place," Valerie said. "The idea is not to pinpoint the position of their den but to get an approximate location for them, say, to within 50m. We are careful not to disturb them.

"If I don't get a signal for one, I'll come back the next day and the next till I do. It might be they are nestled behind a rock or in some difficult terrain."

From the outset, the monitoring struggled to pick up a signal from one the birds, No 36. For more than two weeks it was missing. Then beeps from it were heard, intermittently, from the bottom end of the sanctuary. A transmitter fault was suspected.

Valerie does not mind the physical effort required some days to track a bird.

"One day, when I was spending a lot of time chasing 36's signal, four South Island robins came around me. I scratched the ground to stir up food for them. It was just wonderful. I carry a few mealworms now, just in case. There's always something special to see."

Her tokoeka-monitoring day starts about 8am. On a good day she might hear beeps from them all before the ecosanctuary's gates close at 4.30pm.

The tokoeka are 18 months to 2 years old, too young to be calling at night for pair bonding and in defence of territories. But some might attempt to breed this winter and spring.

Kiwi droppings and holes made by probing beaks are commonly seen in the grassy areas of the ecosanctuary, and on the tracks. Night tours, just starting at Orokonui, have a slight chance of encountering a bird foraging.

English-born Valerie lives at Waitati and has contributed to the Orokonui Ecosanctuary project since founding trustee Dr Ralph Allen first spoke about it at Waitati seven years ago. Her husband, Michael, volunteers for pest control and monitoring duties and helps with replanting.

For Valerie, however, listening to kiwi beeps is a real buzz.

• Postscript: At the end of February, Valerie picked up a "mortality signal" - beeps at twice the normal rate - from one of the tokoeka, No 29. She tracked it to the ecosanctuary's rubber-lined fire pond.

Kiwi do enter streams to feed on freshwater crayfish and nymphs, and they have been known to swim across large rivers. Seemingly, No 29 was attracted into the fire pond and was unable to get out.