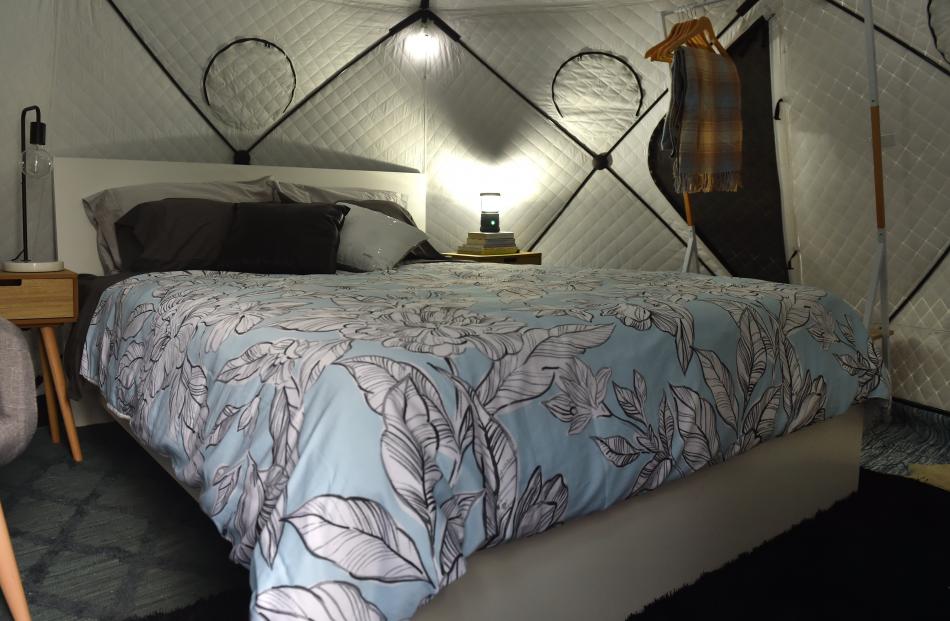 Cori Holmes says the shiftpods are popular at festivals "because they literally take 30 seconds to put up". Photos: Peter McIntosh 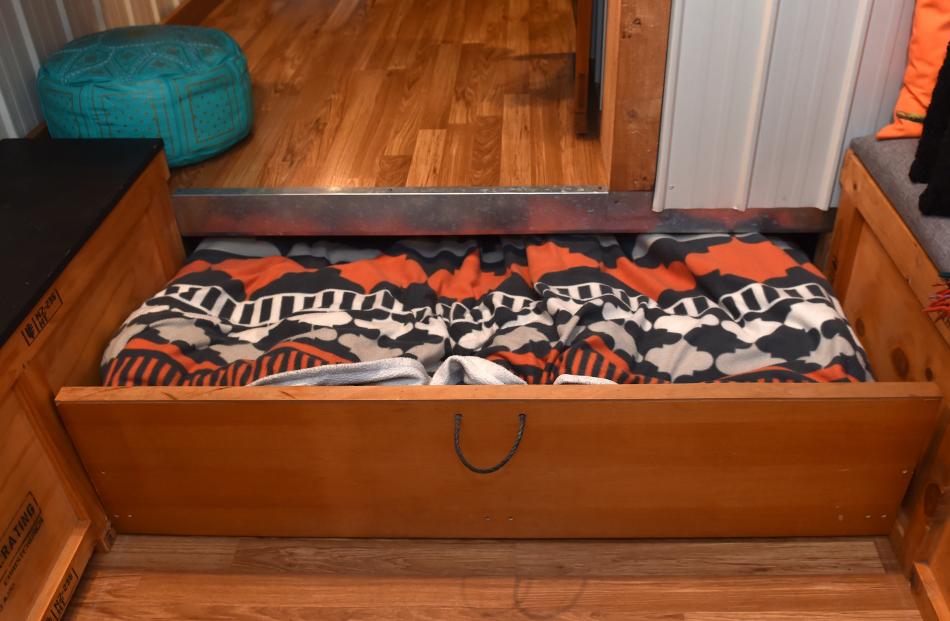 The double bed fits between the trailer’s wheel wells. 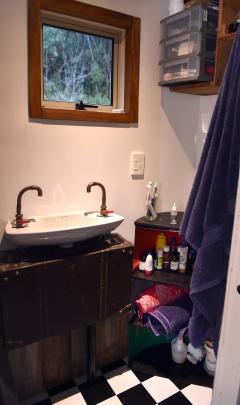 The bathroom has a novel vanity and (out of the picture), a standard-sized shower.

Old roof slates line the wall behind the wood burner. 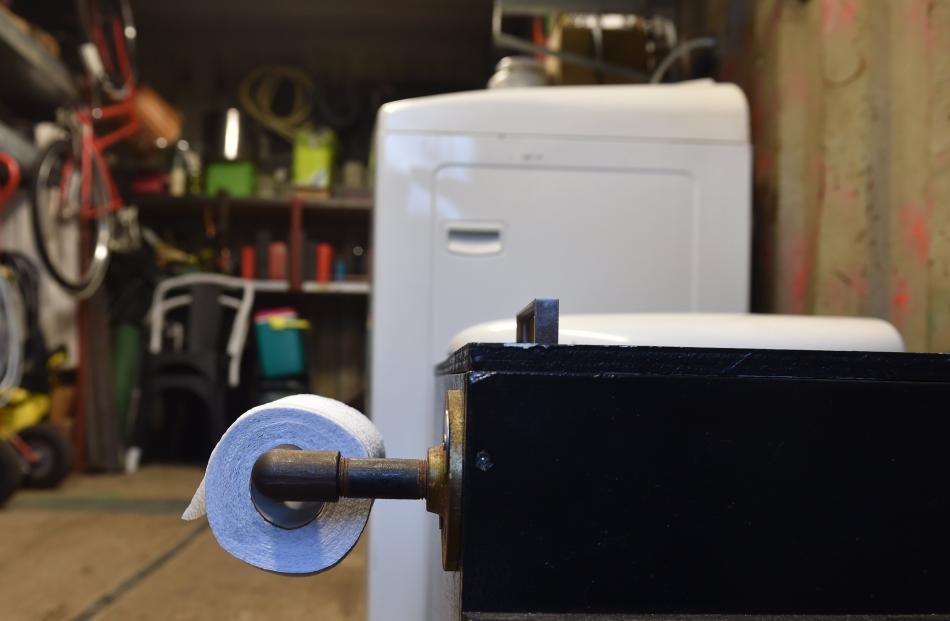 The composting toilet is in a separate container.

Imagine living in an area smaller than an accessible parking space. Kim Dungey talks to a couple who are enjoying the experience.

At a mere 14sq m, this Waitati house on wheels is not just small, it's tiny.

Measuring 2.5m wide and 6m long, it is only a fraction of the size of the 180sq m average new-build in New Zealand.

But within its walls, there's a double bed, a full-size shower, a wood-burning stove and a functional kitchen.

Best of all, the home, including solar panels and batteries, cost less than $20,000 to build.

Patrick Brunelle (32) and Cori Holmes (28) relax in their tiny home, which is off the grid and only 14sq m. Living in a small space makes sense in New Zealand, where people are used to living in cribs and older homes with a small footprint, Ms Holmes says. In some areas of the United States, where they grew up, house sizes are ‘‘ridiculous’’. Photos: Peter McIntosh

Cori Holmes and Patrick Brunelle kept costs to a minimum by using free or recycled materials and doing all the work themselves.

The young Americans had researched tiny homes before moving to Christchurch in 2014 and, dismayed by the price of houses, decided to build their own the following year.

With only a few possessions in their suitcases and savings they had not had to dip into, Ms Holmes says it was a case of "now or never''.

"It was probably the last time in our lives that we'd have absolutely no furniture.''

Container homes and yurts had both attracted their interest. But a tiny house on wheels was the most mobile option and when a tandem-axle trailer was advertised for $3000 on Trade Me, they snapped it up.

For nine months, they kept the trailer on a llama farm at Rolleston and spent every weekend working on it.

Ms Holmes had not built anything before. But Mr Brunelle, a welder, was able to modify the trailer and a high school summer job framing mansions in New Hampshire proved useful experience - even if he did have to saw all of the tiny home's framing by hand because the farmer did not want him using power tools during a dry summer.

"We didn't really know what we were in for,'' Ms Holmes explains, "but it was a project that we were more than happy to take on and we're very, very pleased with the results.'' 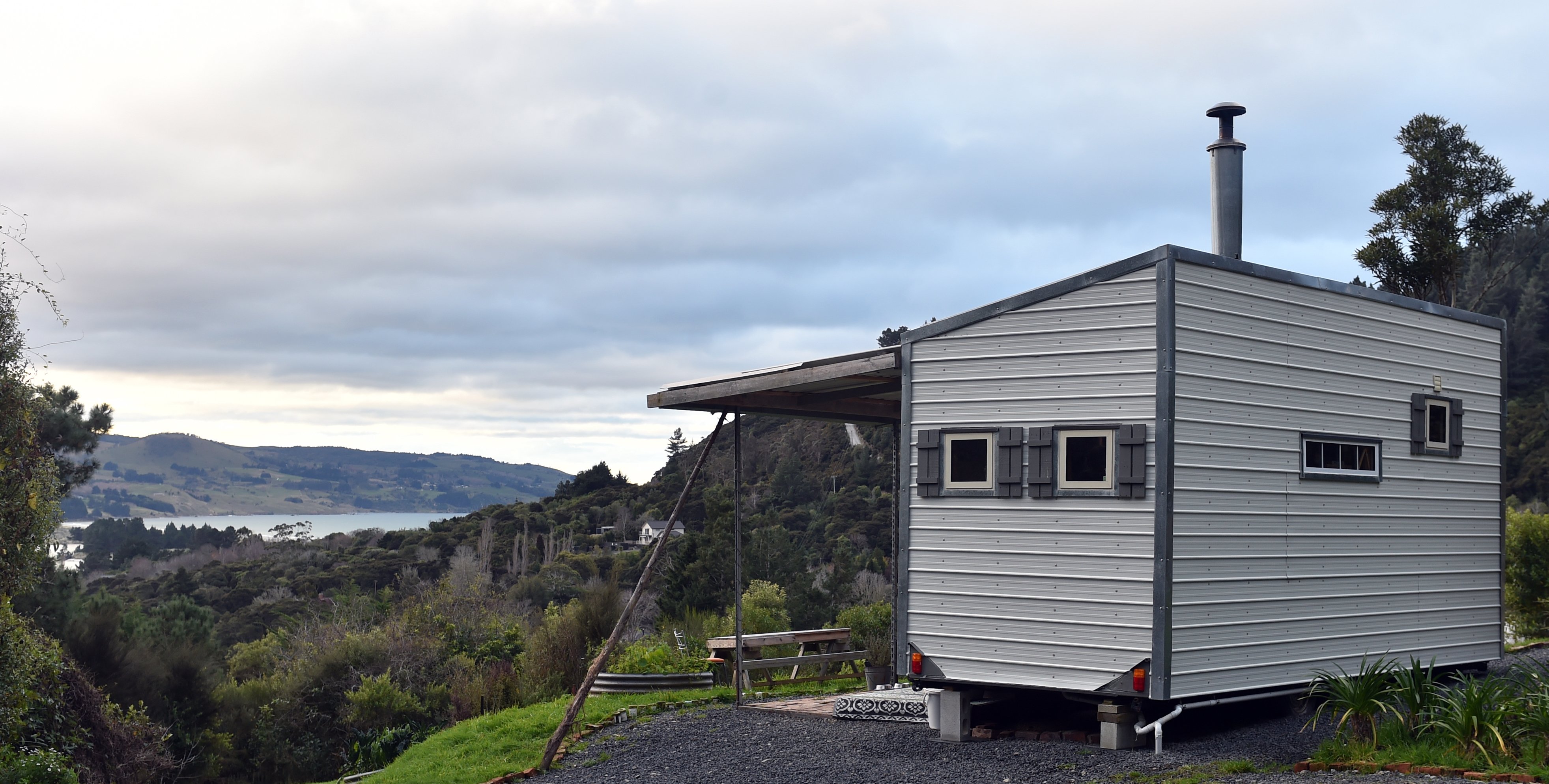 The owners of this tiny home fell in love with Waitati when they moved there last year. The double section means they have plenty of outdoor space and have been able to grow a wide range of fruit and vegetables.

Choosing windows with aluminium frames rather than wooden ones made for easy handling and helped keep the mobile home well within maximum weight limits. Steel cladding added rigidity and the roof was made from corrugated iron.

Inside, there were a couple of non-negotiables: the couple wanted a standard, 900mm-square shower and a large kitchen sink. The latter is, in fact, a laundry sink, which Mr Brunelle welded into the bench top; a cutting board fits neatly over the top, giving them more counter space and keeping dirty dishes out of view.

The couple have cooked everything from scones to pies on their barbecue and say not having an oven, microwave, toaster or electric kettle is no hardship.

The bed fits between the wheel wells and pulls out from a raised floor like a big drawer.

A table slides out from under the kitchen bench when a dining space or extra work surface is needed.

Beside the TV, a wall-mounted suitcase zips apart to reveal a record player. Albums are kept under the bench seats, which also house infrequently used items like a pasta maker and a blender. A section of the laminate floor lifts up to reveal their shoes.

One advantage of living in a mobile home is being able to move anywhere their work takes them. After living in Christchurch while Ms Holmes completed a master's in business management, they moved to Waimate, where Mr Brunelle worked at the local dairy factory, before arriving in Waitati in May last year. 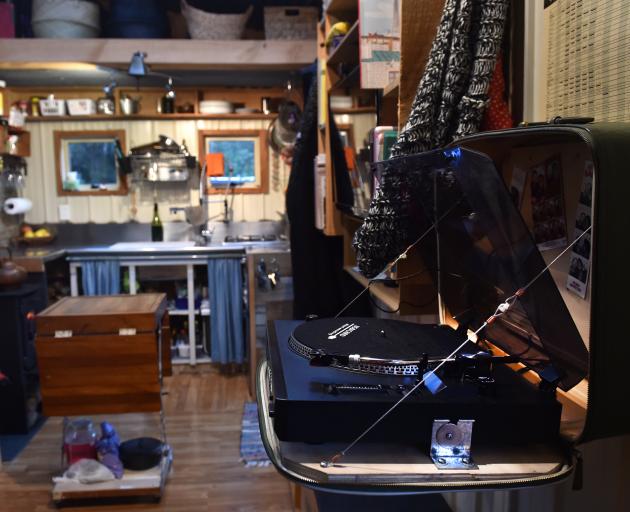 An old suitcase on one wall zips apart to reveal a record player.

The building code does not apply to the tiny home because it has wheels on the ground at all times, so is movable and considered a vehicle.

Living in a small space means they have to think long and hard about every purchase, it is difficult to pursue hobbies, and interested people sometimes arrive unannounced for a look. But Ms Holmes says they save "a lot'' of money.

The $100 a week they have paid to her parents, who own the section, is "much more affordable'' than the $295 rent on their mouldy Christchurch flat.

"Electricity is low. Gas is low. And we didn't incur any debt to live here,'' she says.

"We have a lot of flexibility about where we live. We can have a cat ... and it's a lot healthier. There's no condensation on the windows and it heats up quickly.''

They also like that they were able to recycle building materials, many of them from demolitions after the Christchurch earthquake, and that "everything has a story''.

Living together in such close quarters has not been a problem and with plenty of outdoor space they have never felt claustrophobic, Mr Brunelle says.

Since moving south, the couple have held two workshops through skill-sharing website Pikaado, explaining the practicalities of what they have done and telling participants "that it's OK to want to live tiny''.

"It's hard sometimes,'' Ms Holmes says. "All you need to do is to watch two hours of TV after the news and all you'll see is 'Flip this house'. 'Renovate this kitchen'. Then you see the ads saying you can expand your mortgage. You can get a personal loan. You can buy, buy, buy ... But there are other ways to live the life that you're imagining.

"We travel back to the States every year to see our families and we wouldn't be able to do that [if we didn't live in a tiny house].

"It's [about] being able to prioritise what you want and building a life that suits your needs.'' 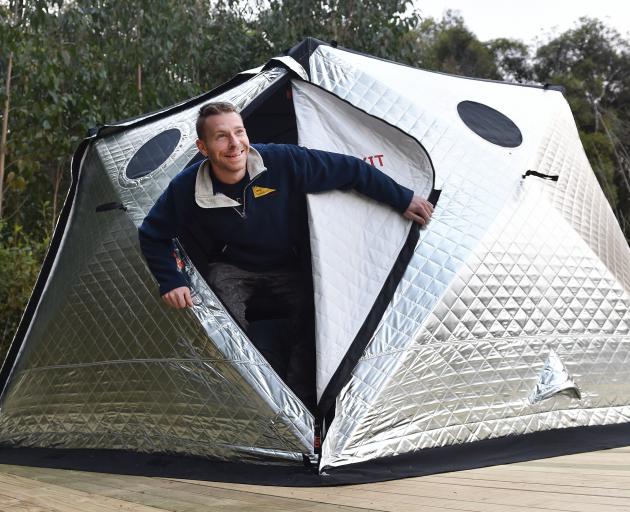 Patrick Brunelle emerges from the shiftpod, which is on a raised platform and used as a bedroom for out-of-town visitors.

• The tiny house runs on solar power. Three solar panels on the roof (two 260W  panels and one 320W panel) and two 280 ampere-hour batteries power the lights and television and enable the owners to charge their computers.

• The indoor cooktop, outdoor barbecue and hot water for the shower all run on gas. Filling a small LPG container every three weeks or so costs $22. 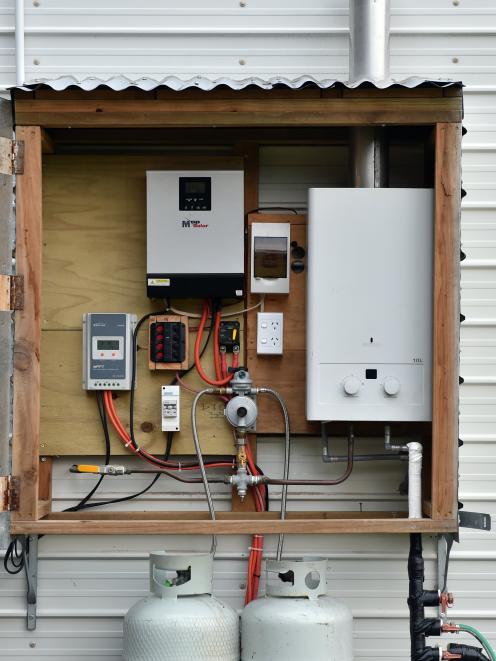 The power hub for the home is mounted on one end of the house.

• There is mains power to a separate container, which houses the clothes drier and Mr Brunelle’s welding equipment. Their electricity bill is $30 a month.

• The toilet was originally in the tiny home’s bathroom but is now in the container while they build a new outdoor facility with a marine-style toilet that will flush waste into a holding tank.

• Also outside, on a raised platform, is a sturdy, insulated shelter known as a shiftpod. Measuring 4m across, it is used as a sleepout for visitors.

• Custom-built crates (seating, with storage below), $700