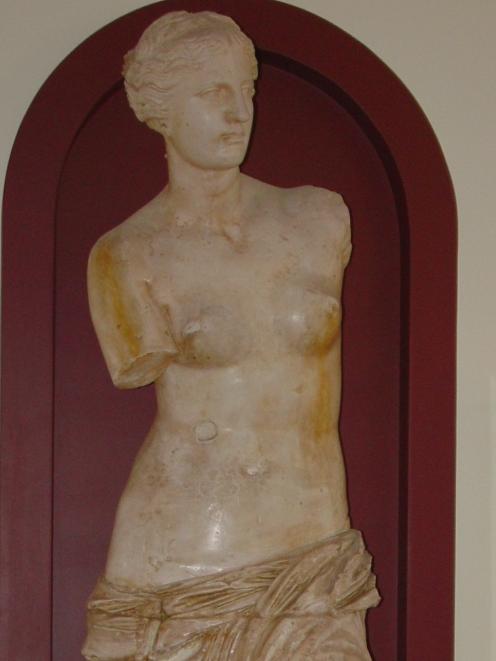 In the sexiest section of "est. 1868'' is a small statuette of a nude female.

While "sexiness'' can be signalled in a variety of ways in different cultures, many, in the Eastern and Western culture, would regard the nude as naturally ``sexy'', and so it has been used in art throughout the ages and in many societies. But in ancient Greece it seems to have taken a special artist to break the social conventions and taboos of his time and portray the goddess of sex herself, Aphrodite, as a fully naked female.

In ancient Greek culture, female nudity in public was an absolute no-no. This contrasts with the situation for men, whose activities could encourage or require less clothing or even nudity, such as sweaty work on the farm or in a foundry, or the quintessential male activities of athletics or warfare.

Before about 350BC, Greek artists had certainly represented nude females, but only in contexts where the narrative made it essential, and then often in scenes of (or implying) violence, such as rape (a term that in Greek art refers to the act of a man physically abducting a woman, not the act of sex as we think of it nowadays). Even then, it would not usually be the whole figure that would be shown naked, but just a breast; or the whole woman's form might be implied through light, figure-hugging clothing. 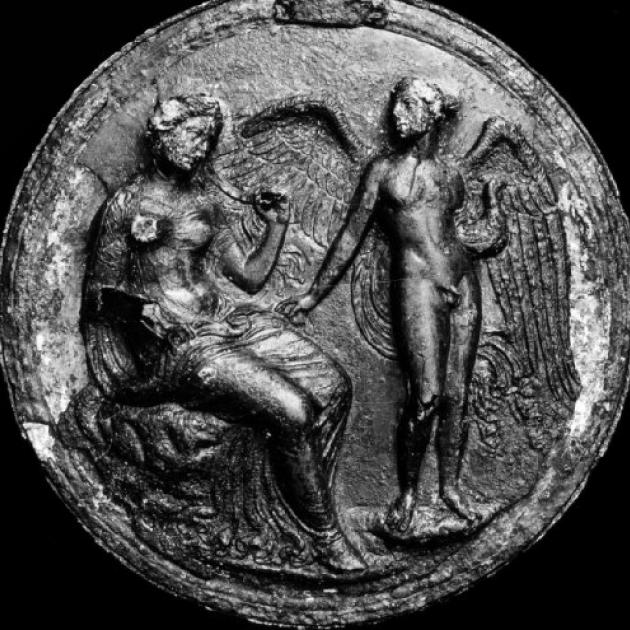 Greek bronze mirror cover decorated with a relief of the gods of love, Aphrodite and Eros. Circa 350-325BC. Pres. Esmond de Beer; Otago Museum Collection. E54.83.

A good example of how far an artist was prepared to take things when it came to showing off the female form under the regular clothing of a thin tunic and a heavy cloak is the decoration on the cover of a Greek bronze mirror, dating to about 350-325 BC, which is on display in the People of the World gallery. Here we have Aphrodite with her son, the winged Eros (or Cupid, as the Romans called him). Her feminine form is quite clearly depicted underneath the diaphanous tunic, and even the heavier cloak does not hide the shape of her legs. In effect, she might as well not be wearing clothes, but the clothes preserve her modesty.

It was around this time, however, that the sculptor Praxiteles broke the boundaries of Greek art by creating a very different version of Aphrodite. About 350BC he was commissioned by the city of Kos to make a statue of the goddess. As the Roman, Pliny the Elder, tells the story later in his encyclopedia,Natural History, Praxiteles made two statues in marble; one fully clothed, as was the norm at the time, but also one completely naked.

The people of Kos had first option on the sculptures, but are said to have been so scandalised by the nudity of one statue that they immediately bought the other, clothed version. Not far from Kos is the city of Knidos, and the people there saw the other statue, liked what they saw and bought it. That statue, as it turned out, became far more famous than its clothed ``sister'' statue, and led to the production of a wide range of nude and semi-nude statues of the goddess for centuries to come, from the Greek world to the Roman. Our statuette stands in this tradition.

Originally our Aphrodite was a full standing figure, probably with her arms held out holding her hair to dry, as she rose from the sea in the form known in Greek as Anadyomene, that is rising. The type was invented in the Hellenistic period, from the 3rd century BC onwards, and included a crouching version. We might note that even with this figure, the implied narrative enables the nudity: the goddess, like her human devotees, was imagined as swimming or bathing naked, or perhaps even being born, fully formed, much as Botticelli would portray her centuries later. As far as we can tell from later versions of Praxiteles nude statue, the same was true, that she was represented as picking up her clothes after bathing. The sexuality is not gratuitous (or at least, not entirely so).

The standing pose of our statuette meant, of course, that her feminine form is as open to view as it could be, albeit with some modesty still around the lower torso and legs. This deliberately voyeuristic approach to the subject - of showing the goddess naked to all and sundry, but as if unaware that she is being watched, and also titillating the viewers by not showing quite everything in the way a male statue inevitably would - preserved a semblance of propriety for such statues in a society which was not given to public displays of nudity, or even semi-nudity, of women. 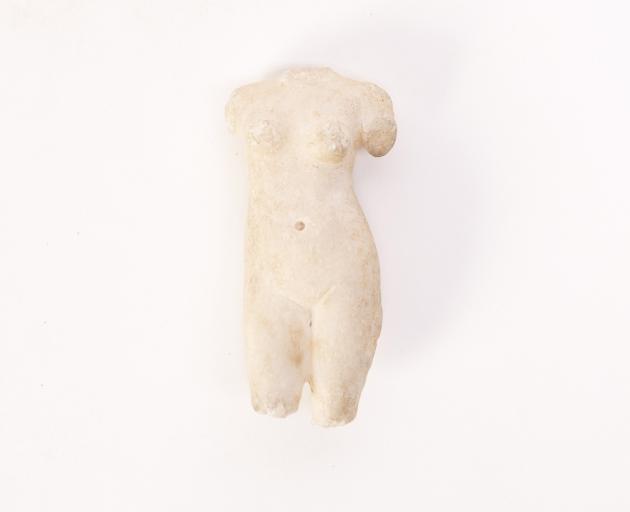 That sense of sexiness and modesty could be marginally increased by giving the goddess some clothing. The larger-than-life statue of Aphrodite known as the Venus de Milo, of which the museum has a cast in the People of the World gallery, is a good example of this. Her bulky garment is wrapped around her hips, threatening to fall off completely but held up (it seems) by the now missing right hand.

Our Aphrodite was not originally headless, armless and legless and there probably would have been paint, too, to pick out details like her hair - but this mutilated form has taken on a life of its own over time. It is a common observation of modern pornographic imagery that the objectification of the female form is increased by depersonalising the subject through ``cutting off'' her head, arms and legs, and therefore focusing on the torso, or more specifically on the breasts and abdomen, with their inherent message of physical sex. In a sense, our statuette has achieved this status through the accidental loss of her appendages, and so she can be regarded as ``sexy'' in a very modern way.

We find this truncated female form in more ``high-art'' forms, such as the photography of Arthur Stieglitz, who photographed his wife, the artist Georgia O'Keeffe, in this form; or of Heinz Hajek-Halke, whoseSchwartz-Weisser Ak (black-white nude) from 1930 shows a modern rendering of the type of Aphrodite that we have in our small statue.