Murderess brought back to life on stage 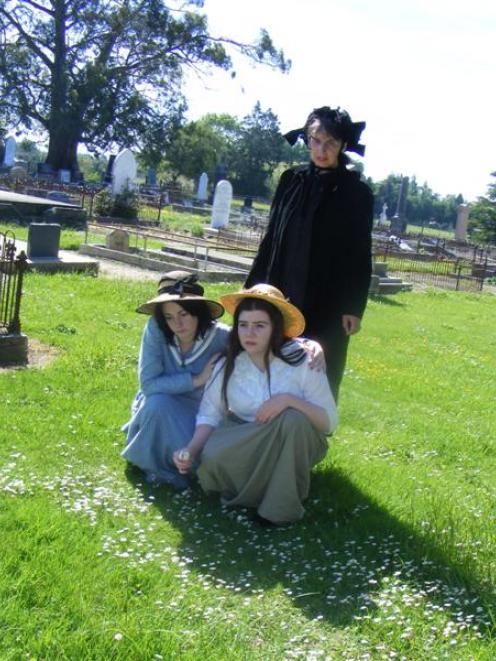 Jess Ransom, Alya McLean and Carol Krueger at Minnie Dean's unmarked grave at Winton Cemetery.
Dunedin actor and writer Carol Krueger has brought Minnie Dean back to life in a play, Was Minnie Dean that Bad?, which premiered at the Globe Theatre in Dunedin on Thursday night.

"It's something that's always interested me, because she was the only woman ever hanged in New Zealand, and, as an actor, I've always wanted to play her," Krueger says.

"It's been fascinating talking to locals about it. I was told she was a quiet woman who kept herself to herself. Someone whose grandmother knew her said she was a most likeable woman. Someone you would trust to take your babies to be looked after.

"Locals believe she was a foolish woman and a bad mother, but not a killer."

The play has been written through the eyes of Dean's 15-year-old adopted daughter, Esther Wallis.

"Esther had to give testimony at the trial, which hanged her mother. It must have been pretty gruesome for her. I was fascinated that a 15-year-old girl had to do that," Krueger says.

"No-one knows what happened to Esther after that. They believe because of the shame she changed her name and moved from Winton."

"There's just a hollow there. The eerie thing is you can stand by the grave and see where "The Larches" used to be. It's literally just around the corner," she said.

"I left some flowers on her grave."

The play is on at 7.30pm at the Globe Theatre in Dunedin until December 20.