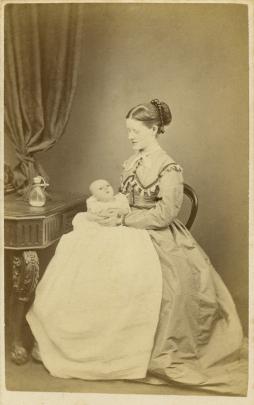 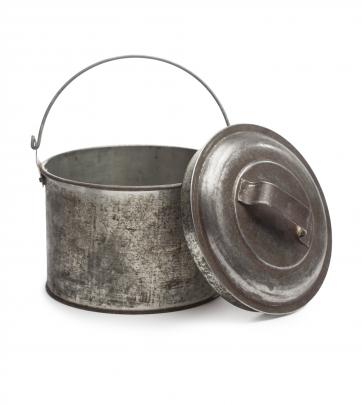 The book includes an essay on billies, the history of which is often overlooked. Representing freedom, adventure and exploration, the billy was first referred to as such in New Zealand in 1858, when John Turnbull Thomson published an account of his... 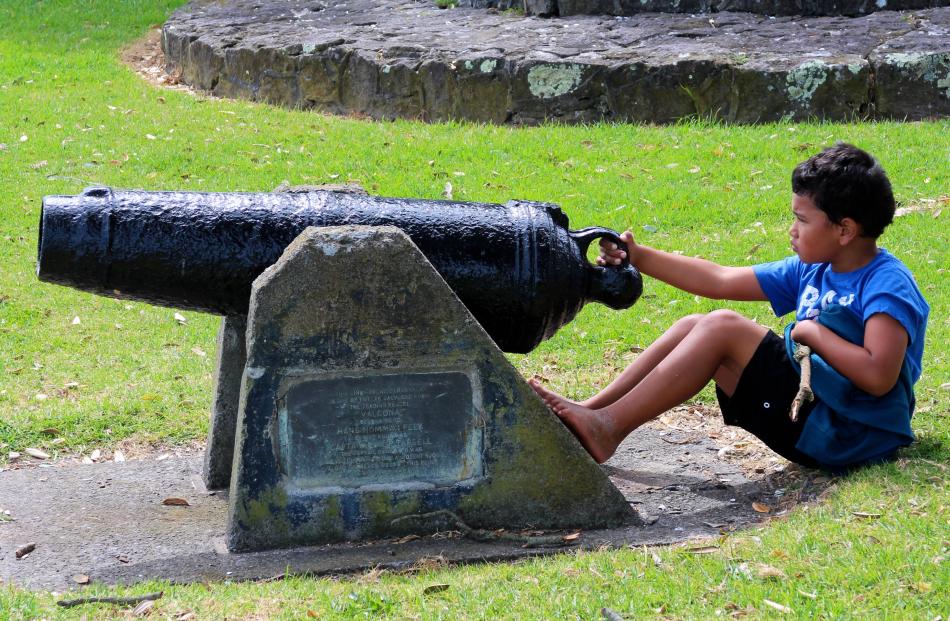 A new generation of Ngati Whakaue takes aim toward Te Tumu with the cannon named Te Haupapa, the last of 12 once in Maketu. Originally owned by Danish trader Te Tapihana (captain Phillip Tapsell), the cannon is an instrument of war was used by various... 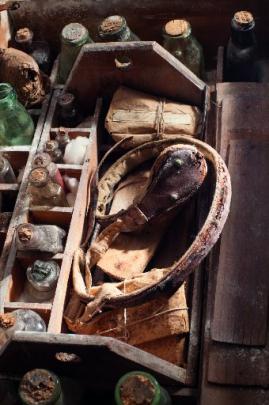 Used at Otakou, where the Weller Brothers established a whaling station in the 1830s, this medicine chest embodies the state of European medical knowledge. Its central compartment holds basic paraphernalia such as splints and dressing, while the...

In The Lives of Colonial Objects, even the seemingly ordinary can offer exceptional insights. And, as Shane Gilchrist discovers, cultural value can be counted in various ways.

Yet, as Alison Clarke, a contributor to The Lives of Colonial Objects points out, the photograph is striking not for the people in it, but because of its inclusion of a baby's feeding bottle, complete with milk, on a table to the side."

Various objects might hold the power of life and death, but there can be few as poignant as the Victorian feeding bottle,'' Dr Clarke writes.

Putting aside any issues of social decorum (children at either extreme of the class spectrum were less likely to be breast-fed), the use of such bottles had serious implications: the bottle's long feeding tube, unless thoroughly cleaned, could house significant numbers of bacteria. In fact, malnutrition and gastrointestinal infection killed many Victorian babies.

The photo proved to be an important keepsake for the Stewart family. Westwood (his parents preferred to use his middle name) died aged 5 months, his death certificate stating the cause as dysentery. As Dr Clarke notes: ''It is very likely that this feeding bottle contributed to his death, though his family may not have realised it.''

Looking beyond the surface

Taken by Dunedin firm John McGregor and Company, the photo depicts a seemingly mundane item. And that is the point, say The Lives of Colonial Objects editors Annabel Cooper, Lachy Paterson and Angela Wanhalla: look beyond the surface and the ordinary can offer extraordinary insights, often providing a lens on histories quite distinct from their initial purpose.

Among the 50 featured objects are treasured family possessions such as a kahu kiwi (Maori feather cloak), a music album and a grandmother's travel diary; others (a cannon, a cottage and a country road) inhabit outdoor spaces rather than shelves; some, including the Otago Museum's fin whale skeleton, are key exhibits at public institutions.

Despite its breadth, The Lives of Colonial Objects posed more than a few headaches for its editors, all members of the Centre for Research on Colonial Culture at the University of Otago, which was formed in late 2012.

"It was important to achieve a balanced selection given that we also wanted to find a way in which it could, if you read it from end to end, work to 'tell colonial history' as it unfolded in Aotearoa-New Zealand,'' the trio explain.

"We didn't want to be overloaded by any one kind of object. Paper and text did threaten to become dominant, but then literacy was an incredibly significant dimension of colonial culture. And the book had to have coherence. So we had to make some tough decisions.''

The Lives of Colonial Objects is the result of a 2013 inaugural national conference on colonial objects. Organised by the Centre for Research on Colonial Culture, it attracted many academics and professionals from the heritage sector.

''We had a huge number of presentations at the conference,'' the editors explain. ''They came up with so many kinds of objects, and so many great stories, so we needed a book that encompassed this breadth of knowledge.''

By focusing on objects, the editors hope The Lives of Colonial Objects can offer more dimensions on New Zealand's past, widening the scope from either ''colonial pioneering in the New World'', for example, or issues of ''oppression and dispossession''.

The book does tell these kinds of stories: a photo of Richard and Augusta Webb, of Waipori, illuminates immigrant life; while an account of ''dunite'', a rock from the Dun Mountains near Nelson, and an entry on the fin whale skeleton (still suspended) in Otago Museum illustrate the ways by which colonial scientists sought to understand the environment around them.

''But we think the volume widens the perspectives on what we mean by 'colonial culture'. It showcases many different kinds of encounters and relationships that challenge simplistic interpretations of the past.

''Some New Zealand museums had published books based on their own collections. We felt that though these were valuable, we wanted to get beyond museums, into people's cupboards and top drawers, and the built environment. We were interested in using objects to tell colonial history, so we wanted to include things that had a lot to do with colonial culture but can't be necessarily be 'collected'.''

What makes an item significant

This touches on a debate that surfaces from time to time: how should an object deemed to be of cultural or historical significance best be safeguarded? The concern recently raised over the fate of a famous Gallipoli painting, Simpson and His Donkey, is one such example.

Fetching almost $500,000 at the International Art Centre in Auckland last month, the painting by Horace Moore-Jones was sold to an anonymous buyer.

More significant than the price, however, was the announcement post-sale that the work would remain in New Zealand, satisfying the worry expressed by, among others, New Zealand First leader Winston Peters, who had earlier urged the Government to buy the painting lest it be lost from public view and possibly from New Zealand.

Enter the Ministry for Culture and Heritage, which had contacted the auction house before the sale of Simpson and His Donkey (which is signed and dated 1915).

"We advised the auction house that anyone wishing to export the painting would first need to apply to the ministry for an export permit under the Protected Objects Act,'' David Butts, manager heritage operations at the Ministry for Culture and Heritage, explains. ''The auction house advised potential bidders of this requirement ahead of the auction and also made it clear in their public statements about the upcoming sale.''

First passed in 1975 (revised in 2005), the Protected Objects Act acknowledges international treaties on the return of illegal exports, yet still applies only to objects 50 years and older.

The legislation hit the headlines in 2006, when the daughters of Charles Upham attempted to sell the war hero's Victoria Cross and bar for millions, but the ministry declined their export application, registering the items as ''objects of national significance''. Although the medals were sold to the British Imperial War Museum, that institution was required to immediately loan them to New Zealand for the next 999 years.

''The ministry investigates suspected breaches of the export provisions of the Act and if a breach is confirmed the ministry will take the appropriate action to try and ensure that the object is returned to New Zealand,'' Butts says.

Although breaches of the Act can result in up to $100,000 in fines or five years' jail (the ministry also has the right to seize ownership of an illegal export), Butts says the ministry, in the first instance, takes an ''educative role'', working with those involved on a case-by-case basis to enable them to comply with the requirements of the legislation.

''The return of the Edmund Hillary's watch to New Zealand is an example of the ministry working with the family to bring this protected New Zealand object back to New Zealand,'' Butts says, referring to the failed 2010 auction of Rolex watches owned by the late mountaineer.

In short, Sir Edmund's widow, Lady June, had sought to sell the watches, but children Peter and Sarah claimed the watches were theirs. The Ministry of Culture and Heritage contacted Lady June to inform her one of the watches was of such historical importance it was protected under the Act and thus it was illegal for her to remove it from New Zealand without permission.

Butts acknowledges there might be objects worthy of protection that might have slipped under the radar or been hidden from attention by unscrupulous types.

''It is possible that objects have been illegally exported by owners either deliberately or because the owners are not aware of the Act. The ministry is aware of only a very small number of export breaches of the legislation. The most notable example is the illegal export of the Motunui Pataka Panels in the late 1970s in breach of the Historic Articles Act 1962,'' Butts says.

''The illegal export of these carvings was discovered when they were included in an auction in the United Kingdom, and the history of the carvings given in the auction catalogue was proven to be false.''

Although the Government was initially unsuccessful in securing the return of the carvings through the British courts, recent negotiations with the owner resulted in the carvings being returned to New Zealand.

• Annabel Cooper is Associate  Professor, Department of Sociology, Gender and Social Work at the University of Otago

• Lachy Paterson is a senior lecturer at Te Tumu: School of Maori, Pacific and Indigenous Studies

The Lives of Colonial Objects, edited by Annabel Cooper, Lachy Paterson and Angela Wanhalla, is published by Otago University Press ($49.95)
For more information about the University of Otago's Centre for Research on Colonial Culture, visit: www.otago.ac.nz/crocc