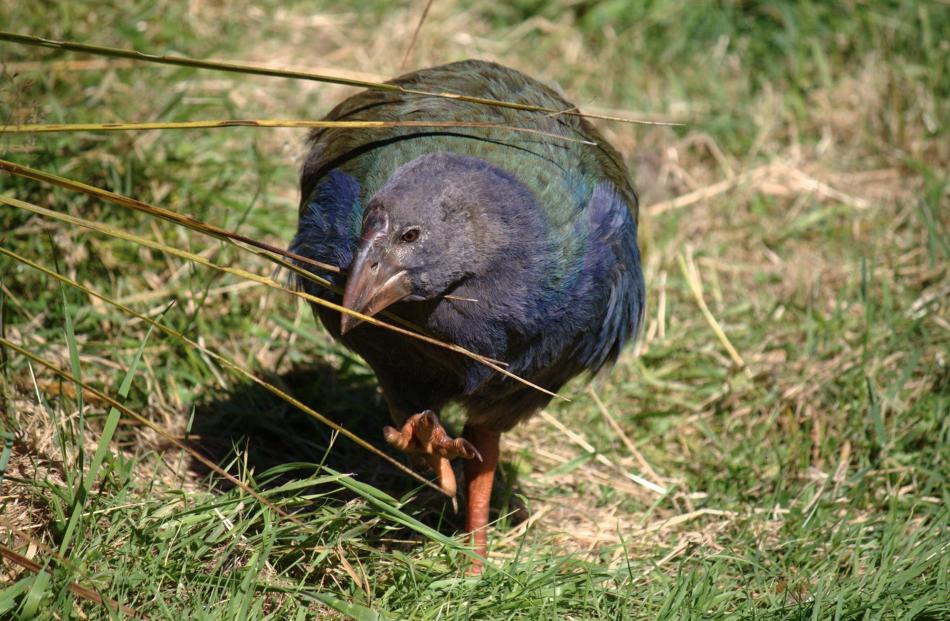 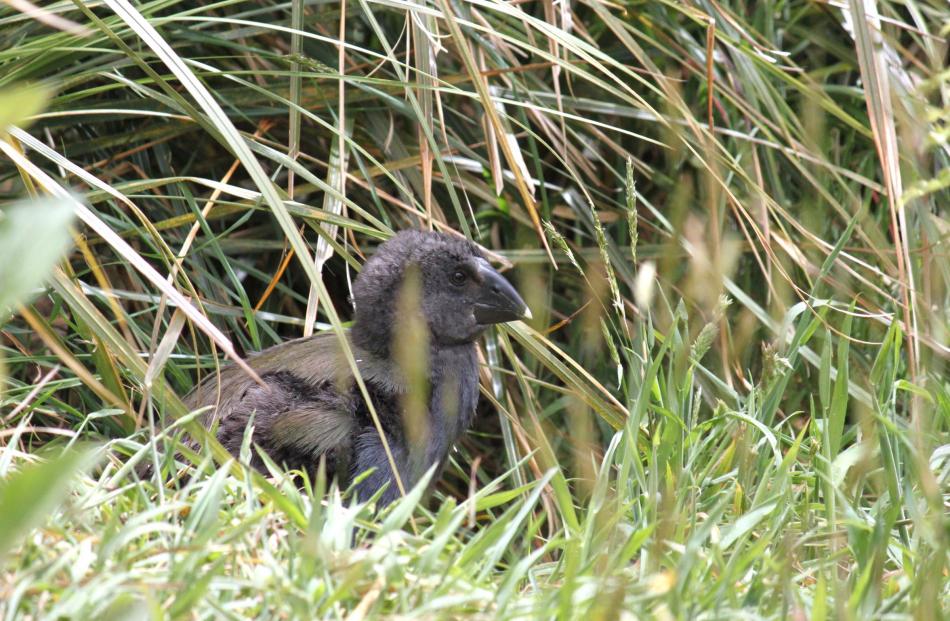 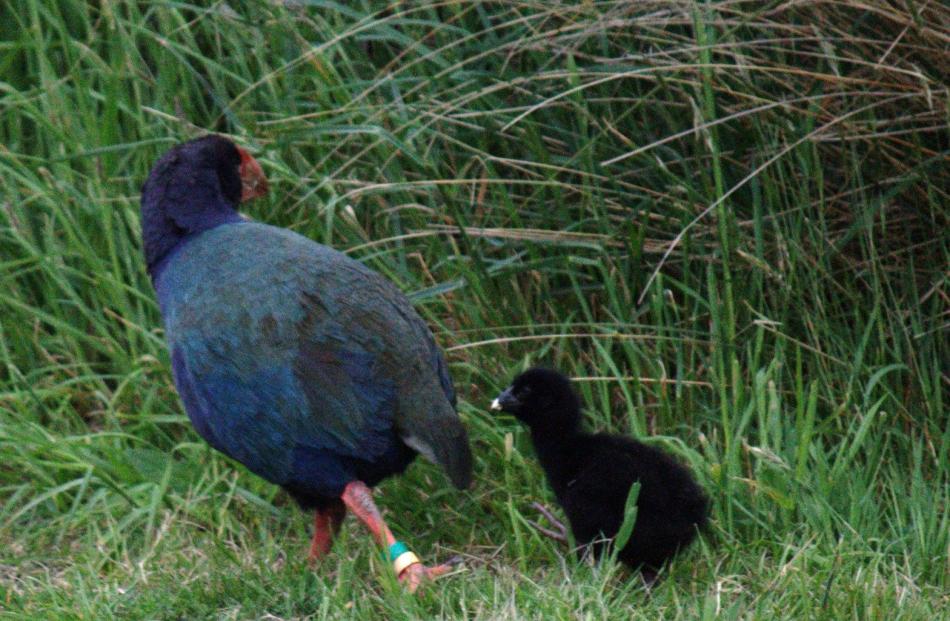 Wheko, one of this season’s chicks, following his dad Quammen. 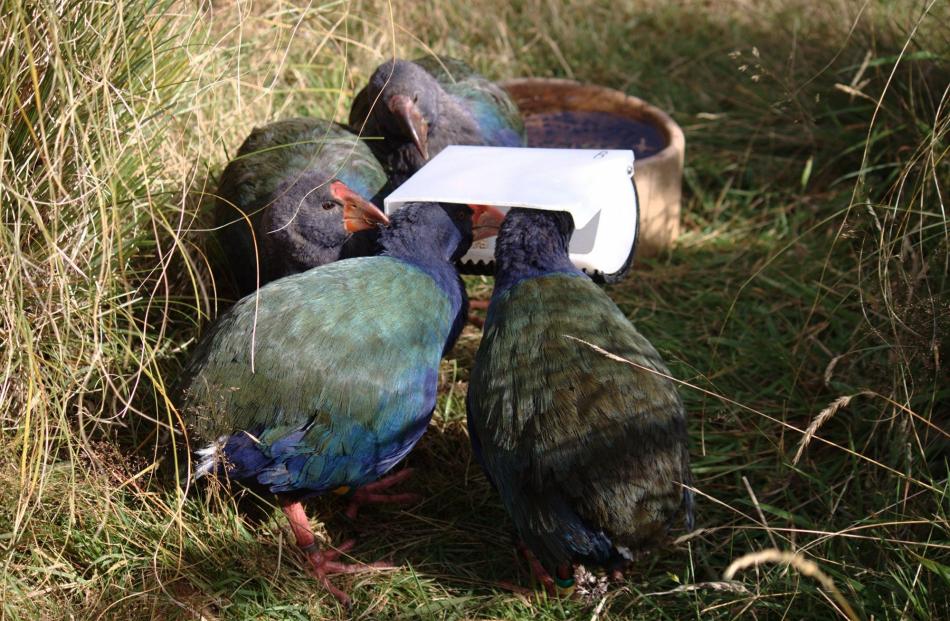 The family of four, chicks now grown, feeding at the hopper, filled daily at 11am.

Orokonui’s popular takahe pair have made a remarkable contribution to the takahe recovery programme at the ecosanctuary and beyond, writes Eeva Kumpala.

Orokonui’s takahe pair, Paku and Quammen, had long tried for a chick. Each year they laid eggs, but the eggs were always infertile, and did not develop. Paku had a chick with another partner previously, while 15-year-old Quammen had never fathered a chick with any of his previous partners. But finally in spring of 2015 Paku and Quammen experienced the joy of parenthood, when a fertile foster egg from Fiordland’s Takahe Recovery Centre was swapped for an infertile one of their own.

To everyone’s immense joy the foster egg hatched successfully, and soon Paku and Quammen were proud parents of a small black bundle of fluff. Quammen, as a first-time (foster) dad, was at first unsure what was involved in caring for a chick, preferring to feed himself rather than the chick. Paku kept diligently feeding it, however, and Quammen slowly started to get the hang of it. While it seemed that Paku was the main source of food for the developing chick, it would often follow Quammen around too. Over time, the chick became a real "daddy’s girl".

By the following autumn, the chick’s beak and legs were turning red, and her plumage was getting the distinctive takahe blues and greens. She got identification bands and a name, Kotahi, suggested by local school children. It means "number one", and celebrates her as the first takahe chick to hatch at Orokonui Ecosanctuary.

The previous year’s takahe chick often stays on as a "juvenile helper" for its parents with the following year’s brood, and Kotahi was left at Orokonui initially to fulfil this important task, and they continued to behave as a family unit. But  as soon as the following summer’s foster eggs hatched, Quammen rejected Kotahi, repeatedly chasing her away from the new family. Kotahi was upset and lonely, so Takahe Recovery staff  removed her to the Recovery Centre, away from Orokonui. Happily, there she  paired up with Jamieson, a handsome lad originally from Mana Island.

Jamieson and Kotahi got along famously, and while too early to have chicks this season, at only one year of age, hopefully in a couple of years they will. The success of Paku and Quammen as foster parents in raising Kotahi led to a further fostering attempt the following summer. However, just as Paku was due to lay her (expectedly infertile) eggs for the spring, some drama happened. The young takahe pair now living at the bottom of the ecosanctuary, Mohio and Marokopa, approached the fence separating them from Paku and Quammen’s territory, which Paku and Quammen fiercely defended. The birds "screamed" at each other across the fence, until the Orokonui rangers penned Paku, Quammen, and the yearling chick Kotahi to let the heated situation cool down.

Once the other pair had returned to the bottom of the ecosanctuary, Paku and Quammen were released, and finding there was no threat to their territory any more, they began building a nest. When Paku laid her eggs, the Takahe Recovery rangers came to exchange them for fertile ones, but found one of the couple’s eggs showed signs of development! Whether the unexpected appearance of the other pair, or success in raising Kotahi in the previous summer "jumpstarted" Paku and Quammen’s hormones and led to this miracle, is anyone’s guess.

Because the "miracle egg" was behind in development compared to the foster eggs, it could not be left in the same nest. Paku and Quammen would not have been able to keep hatching it to term with two chicks demanding attention. Maybe Marokopa and Mohio could incubate it? But they were thought to be too inexperienced as first-time parents, so eventually the egg was taken to Te Anau, to Punanga Manu o Te Anau, Te Anau Bird Sanctuary. There the "miracle egg" was given to veteran foster parents Kawa and Tumbles to incubate. They happily obliged, and  the chick did indeed hatch.

Under these foster parents’ care, the chick has thrived, and finally got its ID-bands, and a name: Ehara, a word expressing wonderful amazement. That describes everyone’s reaction to the "miracle egg" that finally gave our Paku and Quammen their first biological chick together. Although not living at Orokonui, Ehara is considered part of our Orokonui whanau too.

Meanwhile, the foster eggs Paku was incubating both hatched successfully. The tiny black balls of fluff were tended constantly by their now experienced foster parents, each parent feeding a chick apiece non-stop. From early on, the chick most often following Quammen seemed bolder, while the one following Paku seemed a bit shyer. But both did as their foster parents told them, quickly hiding in bushes if one of the parents boomed a warning of someone approaching, or strolling with them if they didn’t mind humans being near ...  usually when food was involved. Paku and Quammen were very protective of the chicks, and once a volunteer reported seeing Paku strutting on the grass, clearly trying to threaten a harrier circling high above them, thinking it might be a threat to her babies. When the chicks were caught for their ID-banding  vaccinations in March, Quammen almost attacked the rangers holding them. Their parenting instincts are definitely strong.

At the ID-banding event a naming ceremony was also performed: the chicks were named Wheko, or "chirping of birds", and Tumanako, or "hope", "wish". Female Tumanako weighed in at 2.4kg, while Wheko, a boy, weighed in at an impressive 2.8kg Due to more female chicks hatching recently, a male chick is good news for recovery efforts.

- Eeva-Katri Kumpala is a postgraduate student of pharmacy at the University of Otago, and a passionate fan of the ecosanctuary project.