No right or wrong when it comes to tap dance 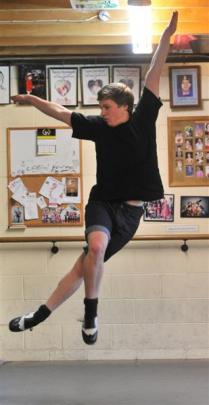 Now is the time to shake off the winter cobwebs and move. Timothy Brown looks into dance forms around Dunedin. Today he looks at tap dance.

Could there be a dance form more suited for Dunedin than tap?

The dance so closely associated with Singing in the Rain screams for Dunedin's residents to sing along and tap away the blues from the city's often grey and damp weather.

But Dunedin is a city also renowned for its individual expression and that's where tap really suits the city.

''It's all about your own individual interpretation.''

Tap owes its origins to dances such as Irish step dancing, clog dancing and juba.

It has a strong association with the minstrel shows and it is believed to have started during the mid-1800s.

''It has a long, long history but most recently it would be in the southern states of America,'' Ms Henderson said.

''Particularly in black communities where they didn't have money for dance training, they put some sand under their feet and made music scratching the pavement.''

Due to the strenuous nature of the dance moves a high-level of fitness is required.

''My students are extremely fit.

''If they are really training at the high-end I encourage them to play a sport, do a lot of running; these things all help tap dancers.

''A three-minute tap routine is a high-end cardio workout.''

The individualism of tap dancing meant there was no strict uniform or dress requirements.

''I want them to get up in front of their friends and feel blokey.

''So they wear suits and what they feel comfortable in.

''For girls, the costumes are pretty elaborate and there's no denying they are expensive.''

It was the individualism of tap dance which made it so appealing, she said.

''It's an expression, it's music with your feet,'' she said.

''It suits rhythmical children, but the key attribute of tap is you can be who you are.

''I can teach a shy child and she can be shy and have her own style.

''Unlike other dance styles where you have to conform, this is tap and you can be your own individual.''

It also allowed singers to express themselves, as it was one of the few dance forms where you could sing at the same time, she said.

Does tap dance make a good wedding dance and how quickly could a couple master a routine?

I wouldn't recommend it for a wedding dance. It takes a long time to look good. It would be like learning the piano from scratch and playing your bride a concerto.

It's all about you and bringing out your individual style.

What is the perfect song for tap dance?

Singing in the Rain by Gene Kelly.

How many people are required for a performance of tap dance and what is the maximum number that can be involved?

As many as you can fit on the stage. If it was a massive stage you could have 100 or more, but it is usually performed by individuals.