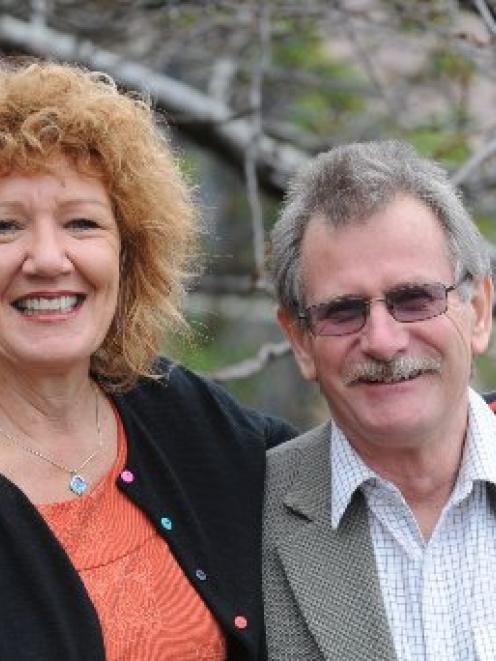 Career counsellor Glenys Ker with her husband Otago Polytechnic chief executive Phil Ker, in Dunedin. Photo by Peter McIntosh.
Glenys Ker has seven qualifications to her name, a successful career in management and education, and her own business, oh, and she just happens to be married to Otago Polytechnic chief executive Phil Ker.

"I have my own professional identity and I'm not defined by who my husband is," she says.

Having moved from Auckland to Dunedin six years ago, Ms Ker lectures in social services at the polytechnic, assesses people's prior learning for Capable New Zealand, and runs a career counselling company.

However, downsizing cities was not easy for her.

"In Auckland, I was not someone's wife; I had my own career," she said.

Cautious about moving to a smaller town, she struggled in terms of her identity as she did not want to be known simply as Mr Ker's wife.

Working as a contractor to the polytechnic heightened those concerns with many referring to her as "the boss' wife".

Also, she often told him he was "a disadvantage" because she felt unable to apply for management roles within the polytechnic.

"I look forward to the day when someone says to Phil: `Are you Glenys' wife? Wow, aren't you lucky?'," she said.

Fiercely independent, she made the decision to be self-employed in Dunedin and enjoyed being awarded contract work at the polytech on merit.

"If I want to talk to Phil about work, I make an appointment.

"I'm in many meetings with him and I don't walk in and think `that's my husband'. I walk in and see him as part of the meeting.

With four children together, the self confessed extrovert and introvert "work 24/7", are great at multi-tasking and have a set time during the week to stop working and spend time together.

While balancing the relationship between husband and boss, Ms Ker believed any negatives about the couple were "other people's problems".

It was Mr Ker himself who made the situation easier: "He is a really humble guy".

"We are very independent people and why we are together is because we have those values and beliefs that are similar - we hate unfairness and are so strong on education - but we are definitely different personalities," she said.