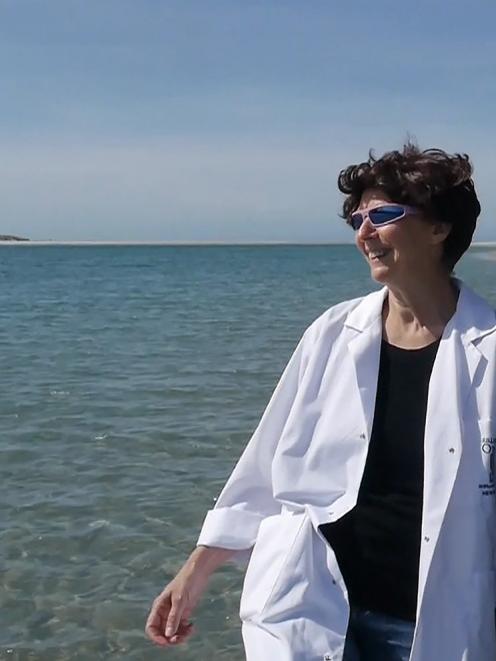 "Oku Moana" joint co-ordinator Pam McKinlay in the role of a scientist for a performance that opens and closes the five-day exhibition.

Art is an ideal way to communicate climate imperatives in digestible chunks, Pam McKinlay says. Bruce Munro talks to the Dunedin artist and curator ahead of the family-focused art expo "Oku Moana".

Pam McKinlay is saving the planet, not one, but a dozen interactive art works at a time.

But not at this moment. Right now, she is parked on the side of the road waiting for the Automobile Association technician.

Electric vehicles might be a vital answer to energy and pollution concerns, but a flat tyre is still a flat tyre.

Waiting, however, does not mean doing nothing. She is on the phone organising people, co-ordinating plans and talking about the intersection, perhaps the collision, of art, science and the environment that is "Oku Moana".

"One of the art works, called Sweeping up the sparrows, is about the carbon cycle," McKinlay says.

It is a 2016 piece by McKinlay and Jesse-James Pickery, comprised of elm wood, rope, a barometer, photography, birdsong and ceramic tiles. The installation is based on a poem written during one of China's regular big-city smog alerts.

"It was very smoggy for five days. Afterwards, they went and swept up all the sparrows.

"During that time, lots of people died too, but the sparrows captured the attention."

In response to its sometimes dangerously high smog levels, when schools are closed and combustion engines are forbidden, China has become a world leader in electric vehicle manufacture and domestic EV sales.

Making it interactive, Sweeping up the sparrows also incorporates the Chinese concept of wishing trees.

"People will be able to take something from the old wishing tree.

"They will [also] be building a new wishing tree ... A tree ... where people will be able to write on prepared slips of paper, or draw on them, or write out a message we have in Chinese.

"What the tree looks like will depend on what people bring to it." 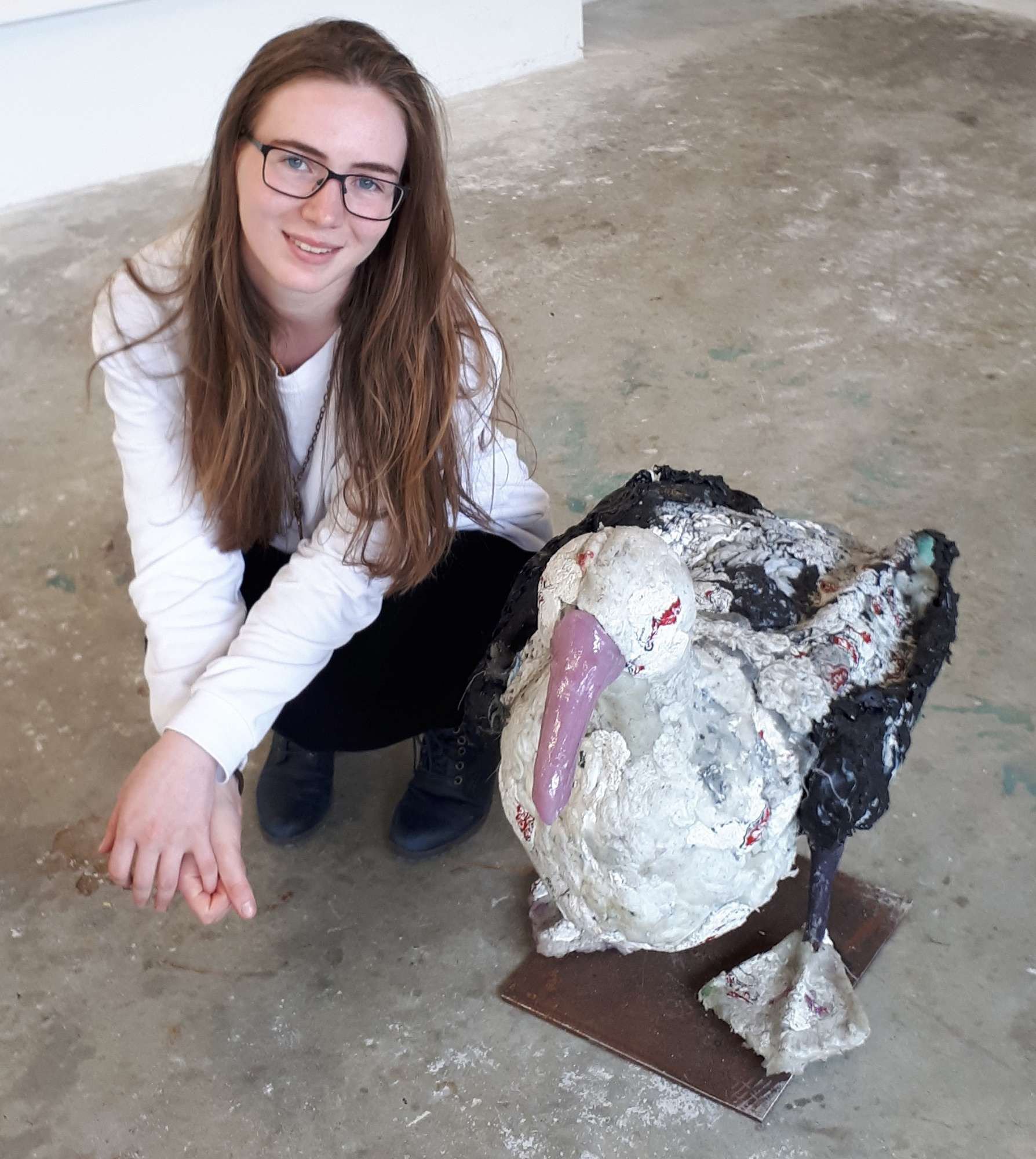 Tori Clearwater and her albatross sculpted from discarded plastic of the type that is choking the oceans. Photos: Supplied

McKinlay is joint co-ordinator of the Dunedin School of Art and University of Otago annual Art and Science Project, which gives artistic representation to university-based scientific research.

This year, the Dunedin artist is launching a satellite exhibition aimed at the masses, including children; a new, interactive, art expo that brings together the nerdy extremities of art and the creative outliers of science.

"Oku Moana", which opens on July 9 in the Community Gallery, Dunedin, is part of the 2018 New Zealand International Science Festival.

Through interactive art, performance and storytelling, it aims to engage people in issues affecting our ocean, McKinlay says.

"It's not your traditional art exhibition. It's chocka full of art and chocka full of creative visualisation by science communicators. But all the artworks are there in the service of storytelling, and for people to look at and make their own artworks from. They are there as muses, if you like.

"There will be something that people can take away from each art station, but also something they have to leave."

As important as climate change is, McKinlay says people are a bit tired of it and want it to go away.

"It's not going to go away. So, we want to celebrate what we've got and we want to look at simple things people can do to make a difference.

"We've got some solutions we want to put on the table. And, actually, we can do that through art - not everything is done through science."

Works in the exhibition include prints, fabric textiles, sculptures, ceramics, film and soundscapes. They will be interpreted and engaged-with through performance, song, workshops, storytelling and art-based activities.

For example, "Oku Moana" includes a sculpture of Tori Clearwater's "beautiful yet grotesque image of an albatross" made of discarded plastic.The artwork is a response to the discovery that 90% of sea birds are ingesting plastic.

"The albatross, a wanderer and a symbol of hope, has become a victim of our pollution," McKinlay explains. 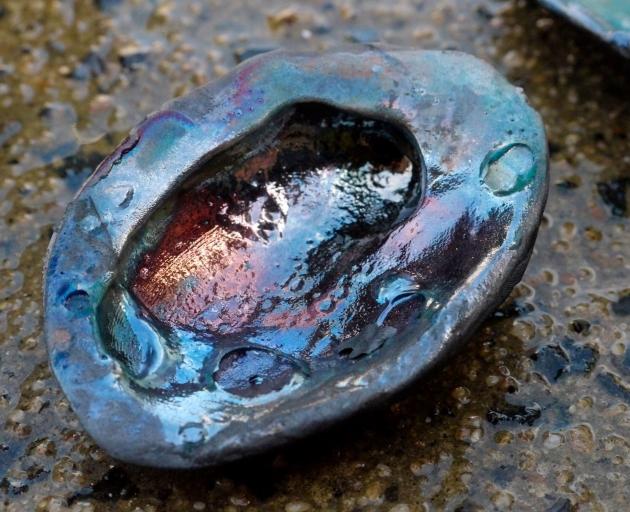 Complementing that sculpture will be an offering of simple solutions, such as sessions teaching the art of making origami newspaper rubbish bin liners to replace plastic supermarket bag liners.

Or, for instance, ocean acidification.

"All the carbon dioxide we are putting in the air ... is increasing the acidity of the ocean, too.

"That has lots of effects. All the organisms in the ocean that have shells - that use bicarbonate chemistry to create shells - they either find it harder to make shells, so you end up with smaller shellfish, or the shells dissolve and they die.

"It's also affecting fish. It's affecting their brain chemistry. And that goes right up through the food chain.

"But what we should be most concerned about is that it's affecting phytoplankton, the most minute parts of the ocean, which make half the earth's oxygen." 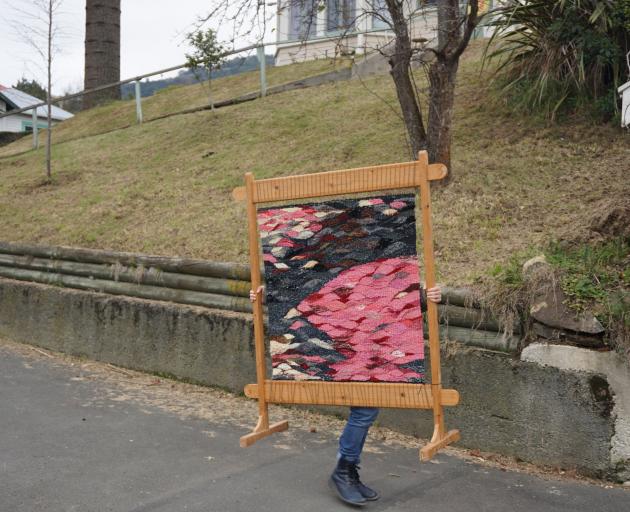 A variety of "Oku Moana" installations speak to ocean acidification.

For instance, Jane Venis' Ka Taki o te Moana soundscape presents the sounds of threatened sea creatures. McKinlay and Pickery's beach stone, flotsam and ceramic shell installation, The Shell Exchange, references the Pacific use of shells as currency and the threat of pollution to kai moana.

"It's quite a beautiful visualisation of what happens to shells in an acidic environment," McKinlay says.

Working in tandem with these art works will be a performance that opens and closes the exhibition - a scientist and the voice of "Oku Moana" conversing about the fate of marine creatures.