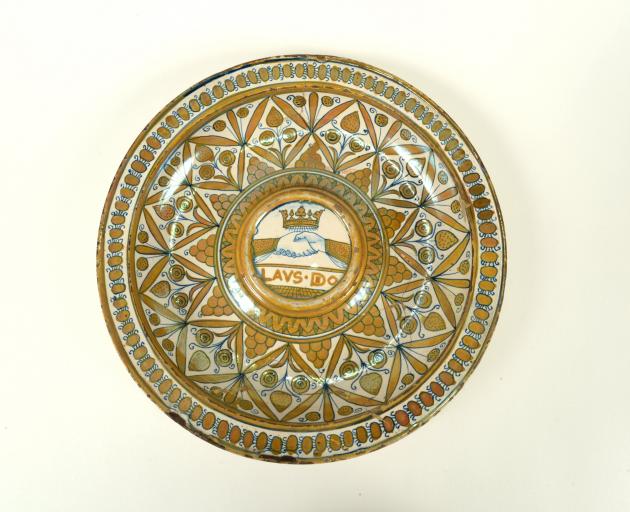 Italian maiolica lustred salver, circa 1520. PHOTO: OTAGO MUSEUM
ln the European spring of 1957, Dora de Beer was holidaying in Rome having recently arranged the shipment of a small but exciting group of Italian ceramics to Otago Museum in Dunedin.

It included this lustred maiolica dish with a raised central boss painted to show two clasped hands, with a crown above, and the words "Laus Deo" – "Praise be to God", below.

A granddaughter of Bendix Hallenstein and cousin of Charles Brasch, Dora and her siblings, Mary and Esmond, grew up in Dunedin but settled in London in the 1930s. The family maintained their contact with Dunedin relatives, friends and institutions for the rest of their lives.

H.D. Skinner was the driving force behind the 1957 acquisitions. He longed to provide visitors to Otago Museum with the chance to see a series of objects illustrating the history of pottery in the Middle East and in Europe. No small ambition, particularly in Dunedin in the mid-20th century.

He had two particular sources of assistance. Finance came from the recent generous endowment of a new purchase fund by Cyril Nichols. Practical engagement with the vendors was one of many kind actions undertaken on the museum’s behalf by Dora de Beer. The museum’s 1952 annual report included a note that: “In recent years Miss de Beer has been our trusted London advisor in ceramics and textiles, principally Persian, in which field she has had the help of the Victoria and Albert Museum expert, Mr Arthur Lane”.

Impressively accomplished, Dora was the first woman to complete H.D. Skinner’s University of Otago anthropology course. As one of the most experienced female climbers in the Southern Alps, she had been invited to join a 1938 mountaineering trip from Burma to China.

In carrying out Skinner’s request, Dora and Mary visited the premises of well-known London dealer, Alfred Spero, hoping to find something “really handsome” but were a little disappointed, considering he had “nothing exceptional” in stock at the time. Nevertheless, Dora asked Arthur Lane, keeper of ceramics at the Victoria and Albert Museum, to look at a small group the sisters thought had merit and with his endorsement, purchased four plates that she felt were “all quite pleasing and good examples of their factory”.

Maiolica is a tin-glazed earthenware made in Italy. Fired earthenware is covered with an opaque white glaze, on to which the painted decoration is applied, after which it is fired again. The glaze ingredients were expensive, and the technique required skill. It’s colourful, appealing work and in the 15th and early 16th centuries many wonderful pieces were produced.

Deruta, where this dish was made, is a hill town in the Umbria region of central Italy, one of the renowned centres of 16th century maiolica manufacture. The Metropolitan Museum of Art website describes workshops with maybe eight people working under a master potter; gathering fuel, firing the kilns, preparing or throwing the raw clay, and mixing and applying the glazes.

In 1520 — an estimate of the date when an Italian artist was making this dish — Portuguese explorer Ferdinand Magellan reached the Pacific Ocean; Henry VIII was King of England, still married to his first wife, Catherine of Aragon; Pope Leo X threatened Martin Luther with excommunication; and Suleiman I became Sultan of the Ottoman Empire. Five hundred years later, the dish still charms us. The clasped hands bring to mind thoughts of unity, partnership, agreement, connections or peace. Appealing ideas at this precise time and in this season.

- Moira White is the curator humanities at Otago Museum.