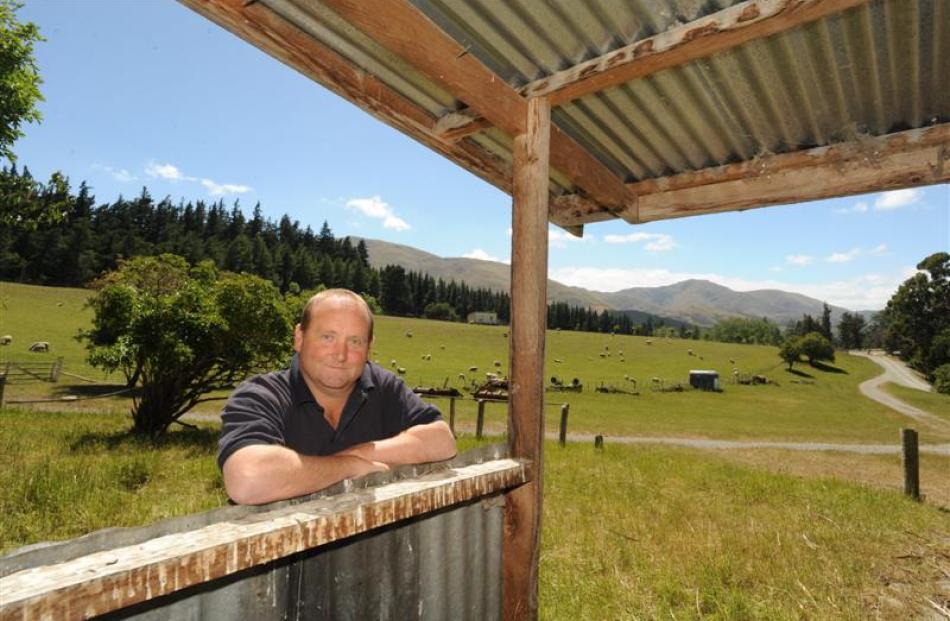 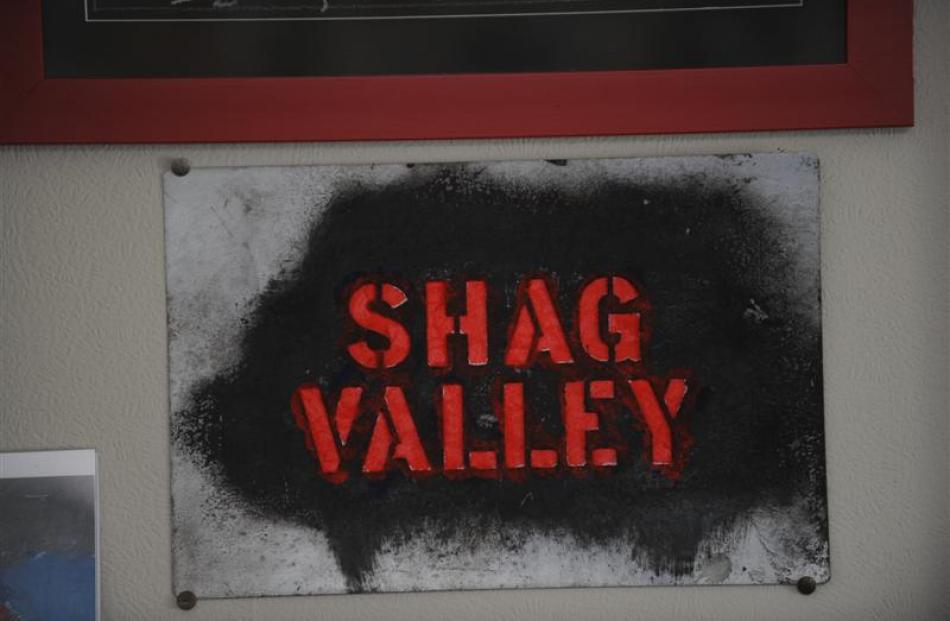 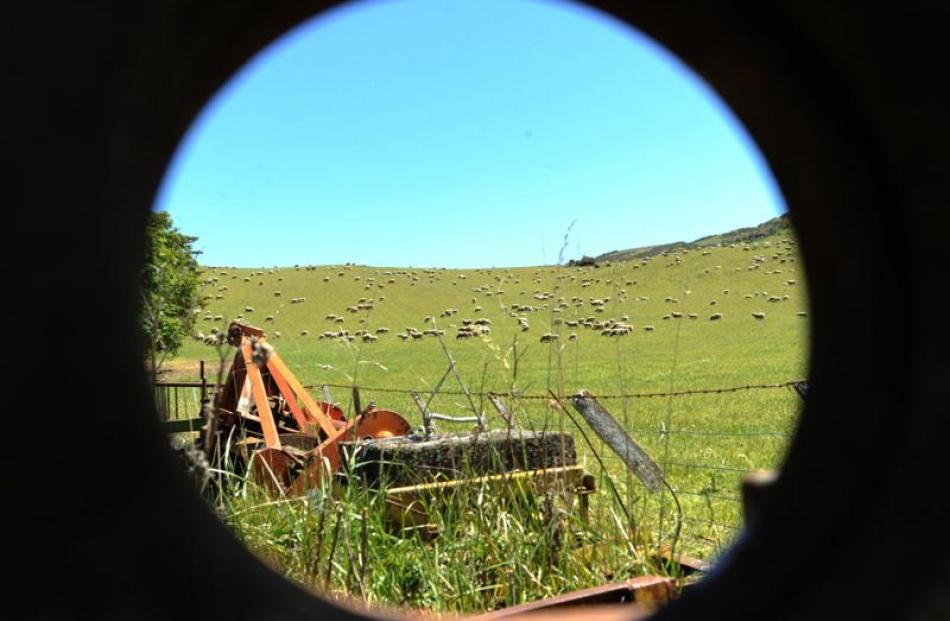 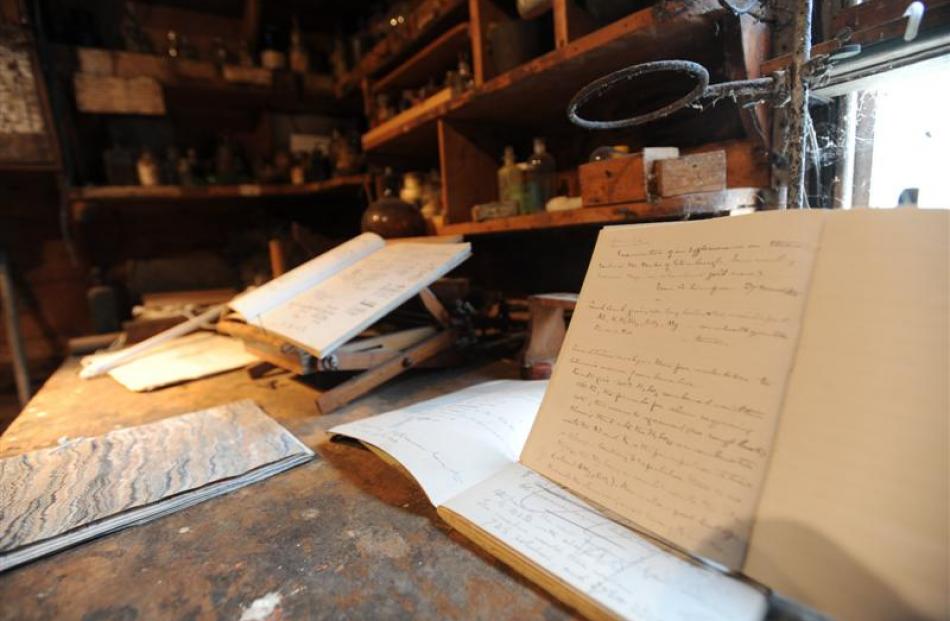 Alfred Bell's writings can still be found in the laboratory on Shag Valley Station known as the Chemistry Shop. 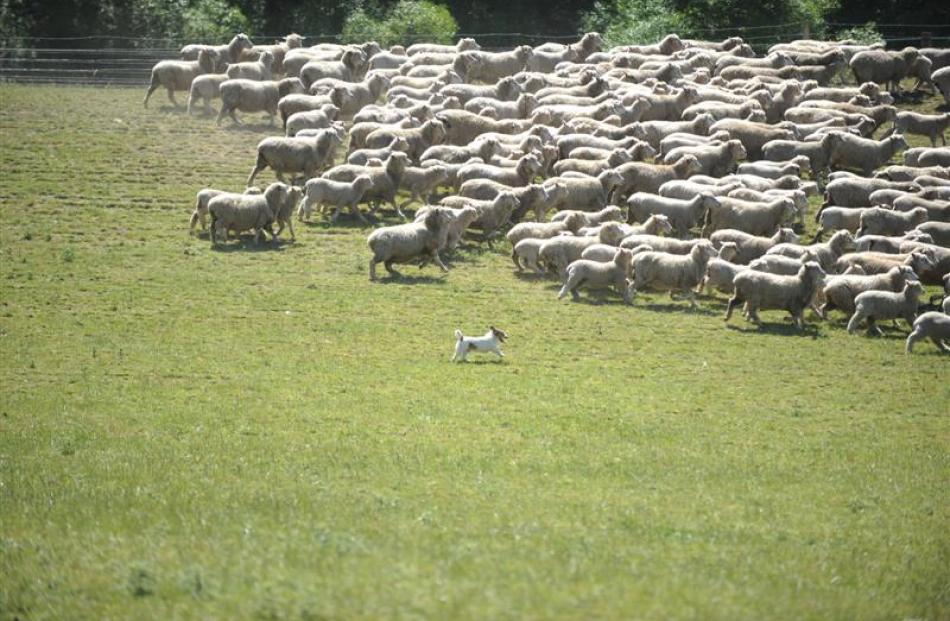 Rusty the pet dog having fun on the Shag Valley Station.

Johnny Bell's eventual aim is to have one - or more - of his three children take over Shag Valley Station.

"My goal is definitely succession," Mr Bell (42), who is fifth-generation on the historic property, said.

In the meantime, he and his wife, Tanya, hoped to improve profitability so they were in a position to leave the station to the next generation in a better state.

"I think the goal of every farmer is to leave the land in a better state.

For Johnny Bell, the youngest of Alf and Louise Bell's three sons, farming was not always his chosen career path.

After leaving school, he started training for a commercial pilot's licence but serious health issues intervened.

He went to Lincoln University and completed a degree in marketing and economics and, following a kidney transplant from his mother, he was then back on the station on which he grew up.

He went into partnership with his father in the mid-1990s until his parents retired to Lake Hayes in 2004.

Two years later, his kidney transplant failed and he is now on dialysis for eight and a-half hours every second night, yet still manages to run the 4900ha property on the Pig Root, between Dunback and Green Valley, with the help of his wife and a married couple, Alan and Jodie Kemp.

By having dialysis at night, the aim was for it to not affect anyone else, particularly the couple's children, Lucy (11), who attends East Otago High School, and Henry (10) and George (7), who are at Palmerston Primary School.

The Bell family was very grateful for the support and assistance of the Dunedin Hospital dialysis team which enabled Mr Bell to achieve nocturnal dialysis as it was relatively uncommon.

He often got tired, particularly if he had a bad night, "but you've just got to cope, you just do it because you have to", he said matter-of-factly.

"I've been known to put the seat back in the truck sometimes and have a wee power nap . . . until the bloody dog comes and stands on top of me.

"As long as my worker can't see where I've parked, I'm fine," he said, laughing.

Asked whether walking away from Shag Valley was ever an option, Mr Bell indicated the view of the surrounding hills.

"You look out there and what would you rather be doing?" he said.

"Where else would you rather live?" Mrs Bell added.

And, with some gentle ribbing from his wife about how the Bells were "great hoarders", Mr Bell joked how he would be too scared to have a clearing sale.

"It would go on for days," he said, laughing.

The Bell family's association with Shag Valley Station began in 1863 when Sir Francis Dillon Bell bought the nucleus of land that was to form the property from Johnny Jones, another prominent figure in Otago's history.

Dillon Bell, as he was known, was born in 1822 and educated in France.

He was bilingual, speaking Italian and English and later fluent Maori .

His father, Edward Bell, was a merchant and British consul in Bordeaux.

Dillon decided to leave France and, aged 17, applied for a position in the London office of the New Zealand Company.

His father's first cousin, Edward Wakefield, was the father of Edward Gibbon Wakefield who founded the company to encourage settlement of New Zealand.

Dillon was appointed assistant secretary and arrived in New Zealand in 1843 as the company's agent.

He was involved in land negotiations with Maori tribes.

He later became very involved in politics and was a minister, commissioner of lands, and later Speaker of the House of Representatives.

He was twice a joint prime minister in short-lived reigns.

When his eldest son, the second Sir Francis (known as Harry) Bell became Prime Minister, they were the first father-and-son to hold that office in New Zealand.

Harry Bell, who pursued a legal career, had been educated at Cambridge.

His younger brother Alfred, who, like Harry, was dux at Otago Boys High School, would have been a scientist had the money not run out.

His parents could not afford to send him to university and, aged 16, he returned to Shag Valley as a shepherd.

He took over management of the property when he was 21.

He was able to continue his interest in science and had his own laboratory on the station known as the Chemistry Shop.

It has been retained in its entirety, still filled with labelled bottles, test tubes and other scientific equipment and books filled with his writings.

In 1888, he was sent by the New Zealand Government to an island near Sydney to spend six months with a team from the Pasteur Institute in an attempt to discover a bacillus to control rabbits.

He built an observatory - in the form of a turret on the homestead - to further his interest in astronomy.

He set up, with Cadet Logan, what was possibly the first telephone connection in New Zealand, between the homestead and a farm cottage, having seen and later copied a telephone created by Alexander Graham Bell (no relation) which he saw at an exhibition in Philadelphia.

He became one of New Zealand's leading analytical chemists and spent much time analysing mineral samples.

He discovered scheelite while collecting straggler sheep from a neighbouring run-holder, which was very timely as, during World War 1, it was an essential mineral used for hardening gun barrels.

It was in short supply and the only other country where it had been found on the Allied side of the war was in Canada.

During the slump in the 1880s, Alfred Bell largely supported the station by writing the leading articles for the Otago Witness and the "New Zealand Letter" for the Australian.

At one stage, he considered selling and accepting a position of editor of the Otago Witness.

Alfred Bell's son, Frank, took over the running of Shag Valley Station after his return from World War 1, where he served as a gunner in France and Belgium until he was invalided back to New Zealand in 1917.

He had become interested in wireless shortwave transmission while he was a pupil at Waitaki Boys High School.

Along with a handful of fellow New Zealand amateurs, he helped pioneer the use of shortwave radio, communicating by Morse code over long distances.

In 1923, he made the first two-way radio contact between New Zealand and Australia and, in 1924, made New Zealand's first contact with North America.

The following month, he established two-way contact with Cecil Goyder at Mill Hill School in London.

It was the first radio conversation from one side of the world to the other and made headlines around the world.

In 1927, she became the first New Zealander to establish two-way radio communication with South Africa.

Frank Bell's son Alf, Johnny's father - and the next Bell to take over the helm of Shag Valley - was one of the first farmers to become involved in embryo transplants with cattle, in conjunction with veterinarians in Oamaru.

He was also one of the first farmers in New Zealand to use a computer for his book-keeping and records.

As a boy growing up on Shag Valley Station, the young Johnny Bell was largely unaware of the property's historical significance, and also the important roles played by his forebears.

"To be honest, it was just home.

"We would come down to the radio shed . . . and play fighter pilots.

"The chemist shop was just a haven then for possums.

"We were just country kids.

"We swam in the river and did what we did," he said.

Fortunately, his father had the foresight to protect the laboratory from possums, by lifting it and pouring a concrete floor.

An old cookshop has been turned into a fascinating museum, and includes the shortwave wireless transmitting and receiving equipment used to establish that first communication between New Zealand and England, along with Alfred Bell's telescope.

Apart from some new implement sheds, all the buildings on the property are old, some dating back to 1863.

The station's buildings are listed as category one with the New Zealand Historic Places Trust.

The homestead where Johnny and Tanya Bell now live was started in 1868.

It has been subsequently extended over the generations and is now a comfortable and attractive family home.

The gardens at Shag Valley were believed to have been originally designed by the famous botanist Baron von Mueller, who designed the original Melbourne Gardens.

The property itself, while gradually reduced in size over the years, is still extensive, running just under 10,000 stock units, comprising 6000 Romney ewes, several thousand hoggets, 250 cows and 100-odd replacements and young stock.

Traditionally, it had been a store and merino property but, over the last few years, the Bells have gone out of merinos and were now finishing lambs, which involved putting in 100ha of crop, and giving them "more control over our destiny".

They were semi-organic in principles.

With 1800ha pastoral lease, they have been battling the tenure review process for about seven or eight years.

Finally, they were hopeful of making some progress.

The climate was very challenging - and Mr Bell said he sometimes wondered why his great-great grandfather, who had the choice of where to buy land, chose East Otago - although they were fortunate to have scope with their run country.

Mr Bell was optimistic about the future of the agricultural industry, saying the future for protein was positive and returns for wool - "a fantastic product" - could only get better.

Some of the initiatives being undertaken to try to improve the wool industry were a "step in the right direction".

There have been huge changes in the district since Mr Bell was a boy, with only a handful of names on letter-boxes still the same.

However, it was still a great community to be part of and they had been very appreciative for the support and help from neighbours, particularly when Mr Bell was ill three years ago.

With his need for dialysis, the family could not leave the property for long, so holidays were not really an option.

However, they did have a "12,000-acre" playground, and the couple joked that their holiday home was sometimes a hut in the hills.

Their three children have all embraced the rural lifestyle.

Lucy has a pony and Henry and George both enjoy riding small motorcycles.

The couple's interests revolved around their children and a highlight for Mr Bell was co-coaching the under-11 Eastern rugby team which won the metropolitan competition on Carisbrook.

He is also a member of the Palmerston Primary School's board of trustees.

They remained positive and philosophical about their situation. "You've only got to spend a couple of days in hospital to know that plenty of other people are worse off," Mr Bell said.

Mrs Bell described her husband as tough and determined, while he said she had been "absolutely amazing" through the difficult times.

Both agreed that they worked as a team.

"You have to in something like this," Mrs Bell said.