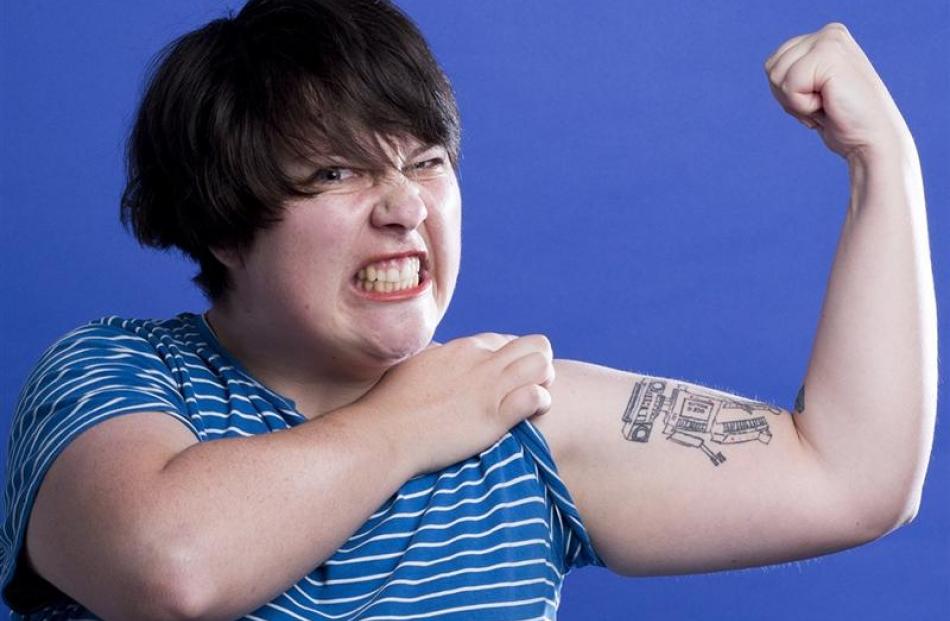 A comedy about depression? Now there's a (dark) thought.

''I'd got horribly depressed really quickly, and at the end of March 2012 I was considering ... suicide,'' the Auckland-based writer, actor and comedian explains.

''Luckily, there was a thread of strength left in me to tell my mum how I was feeling, so the next day I was on a plane back home to Tauranga from Wellington.''

Desmarais' lengthily named show, to be performed from March 20-22 at the Fresh n' Fruity Gallery as part of the 2015 Dunedin Fringe Festival, arrives after both favourable reaction and a lengthy bedding-in process.

The original season of Home premiered at Bats Theatre, Wellington, before heading to The Basement, Auckland, then to the Hamilton Fringe Festival.

It has also been performed in Germany.

''A director from there had seen it in Wellington and wanted to put it on in Germany at an English language theatre. It was pretty funny to think of someone else playing me, but it was awesome to see the play go international,'' Desmarais says.

''In the past, I've played Home in more conventional theatre spaces with set ticket prices, but I've always been interested in performing it in a less formally performance-specific space.

''It's such a personal and intimate show. I share a lot with the audience. I think being in a gallery space with limited theatrical lighting will enhance that feeling even more. I want the audience to feel that they've experienced something with me, rather than just passively watched me talk about my experience.

''One thing that stood out to me after previous seasons of Home was how people would come up to me after the show and tell me how familiar it was to them, and that they'd experienced something similar.

''I want more people to see this show and for them to feel less alone. I don't want anyone's personal financial situation to stand in the way of that. So I've made it free/koha/pay what you think it's worth.''

Born and raised in Tauranga, Desmarais moved to Sydney with her family when she was 15.

After completing high school, she returned to New Zealand and graduated with a bachelor of arts degree in theatre, film and gender studies from Victoria University, Wellington.

She moved to Auckland four months ago to pursue her comedy career and is focusing on stand-up.

''It was about sex education in New Zealand, our discussions around consent and feminism and misogyny, and was another comedy where I talk about really serious things.

''We just won the Social Impact Special Award at the Auckland Fringe. It's awarded to a show that endeavours to change the world for the better.''

As a stand-up comedian Desmarais is used to being alone on stage, although she says she does enjoy working with other actors.

''I tend to have a strong vision and idea of how I'd like things to be artistically, so I find it's simpler to do most of the work myself. That said, it's also quite intense as it's a lot of work for one person.

''Part of the one-woman show thing is that it streamlines a lot of things, too. It's easier and cheaper to tour, and I have a lot of creative control.''

• Desmarais points out that Home is not just an airing of her ''pain and grief''.

As one of her favourite theatre lecturers used to say, ''Theatre is not therapy''.

''They say writing is rewriting. I rewrote the play so many times in order to achieve that balance. I think it pays off.

''I was really intent on showing how you can be in that dark place, that it does happen and it's real, but that there is a way out and there is - to continue with the cliches - light at the end of the tunnel.''

One of the biggest things she has learned in the process of her recovery is that life is funny.

''But I learned that seeing the humour, even in the darkest things - including my counsellor confusing bisexual and transgender, for example - makes life more bearable.

''I still have mental illness. It probably won't ever go away. I take medication to stabilise my moods and avoid depression, which works really well for me.

''It's an ongoing process, but I'm able to function fairly normally now - within some limits - so I'm really proud of that.

''I believe it's important to convey that you can live with mental illness. It might not be curable in all cases, but that doesn't mean it should stop you from being as awesome as you can be.

''There's nothing more satisfying to a storyteller than telling a really important story - one that I hope can change the way we think about mental illness.

''I want to open up the conversation. If we do that, we can save lives. It saved mine.''

• Home/The Hilarious Comedy About How I Nearly Killed Myself/A Play About How I Nearly Died But Didn't Then Learned A Lot About Life Afterward will be performed from March 20-22 at the Fresh n' Fruity Gallery as part of the 2015 Dunedin Fringe Festival.