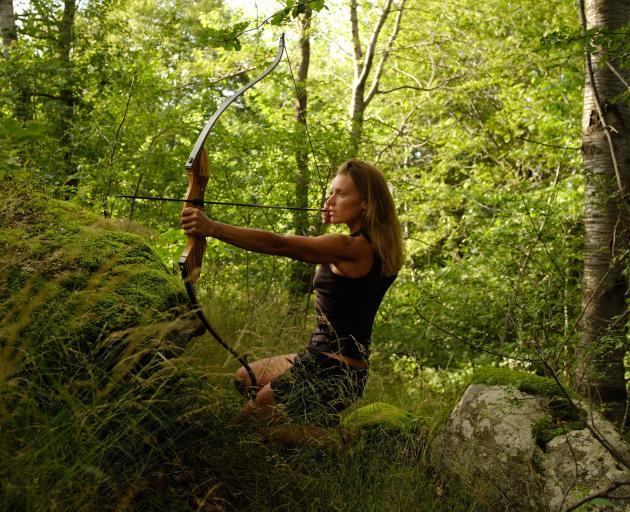 The successful applicants should know how to bushwhack, hunt or fish, be comfortable carrying a 20kg pack and able to confidently cross rivers. It goes without saying, vegetarians need not apply.

Miriam believes she's more likely to find the right contenders in New Zealand or Australia, where women already have experience hunting and fishing and are familiar with the outdoors.

Having done so, Miriam plans to embrace the wonders of nature, together with her merry band of sisters, and set off on a three-month self-sufficient journey. The band will depart at the end of November from Golden Bay and head south through remote parts of the South Island, avoiding the beaten paths where possible. 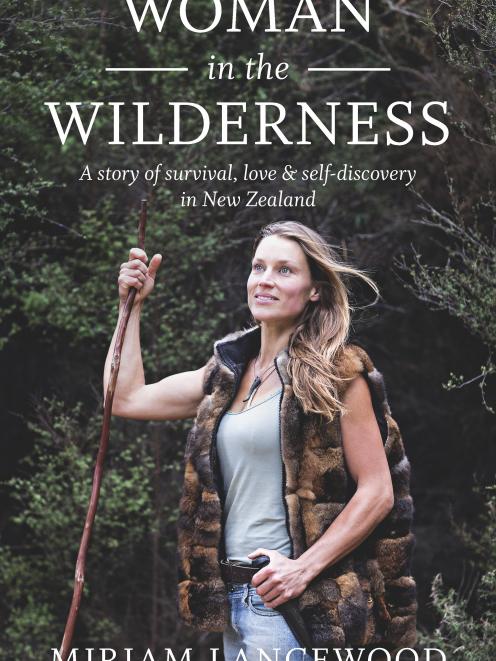 Miriam is hoping to find another hunter with a firearms licence and someone who knows how to fly-fish. The women will need to be comfortable with forsaking any and all forms of technology and the need to connect with family.

It will also mean being happy without a hot shower or feeling the need for social media.

She says the expedition has no commercial value. It is simply an opportunity to explore the wilderness and the untouched beauty of the Southern Alps.

She already has 32-year-old Tamar Valkenier in mind for the trip. Her trapping and cooking skills, together with a vast knowledge of edible plants made her a strong contender. Valkenier has previously spent long periods of time exploring Asia. Having bought a camel and two horses, she walked 1500km across Mongolia, learning from the local nomads how to hunt with eagles and cook on an open fire.

"I'm specifically looking for women because in the past I've mostly met men in the wilderness and there's no reason why women couldn't live out in the wild too."

She is keen to share her knowledge gained from spending a number of years in the wilderness. She is also interested to find out how different the experience will be without the security of having a man at her side.

"I think it's vital for women to feel empowered. We live in a world full of uncertainty and having basic survival skills becomes increasingly important."

She maintains that when our lives become simplified, without the need for devices or machines, we are much more open to communicating fluidly.

"When you live in civilisation your mind is always moving at high speed. But once you immerse in the natural world without its distractions, it can take several weeks for your mind to calm down and find nature's rhythm."

She would know. Her memoir Woman in the Wilderness tells the story of her six-year commitment to living in some of New Zealand's most remote landscape, embracing all seasons and every imaginable problem. 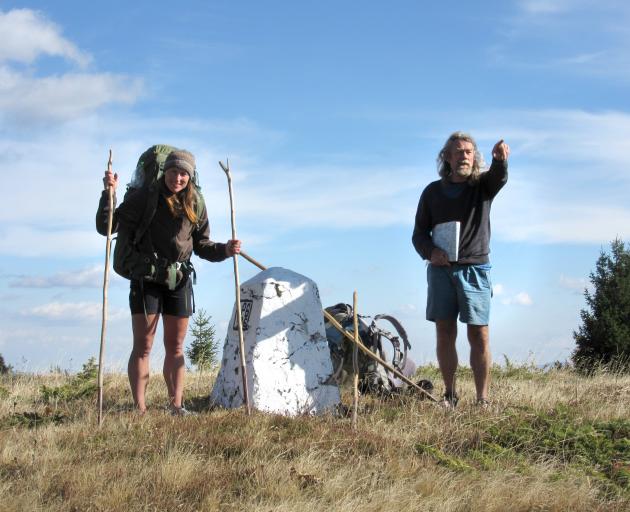 Miriam Lancewood and her partner Dr Peter Raine.
She poses the question: "How often do we have the opportunity to examine ourselves closely when we are constantly surrounded by noise and clutter from the outside world?"

"My mind is free from so many of the usual abstract things. The usual day-to-day worries pale in comparison to the vast landscape around me and I'm able to focus so much better on the natural world. I feel much more integrated with my environment."

She says returning to civilisation after six years off-grid was more difficult than she had anticipated. The world suddenly felt abstract and artificial to her.

"Many people who live and work in the city are chronically sleep-deprived and it adversely affects your mind. You become very dull and then with less clarity you can easily make the wrong choices."

She emphasises that with so much of our time spent on technology, people are surrounded by negative or abstract things, developing fears that don't exist in the natural world. 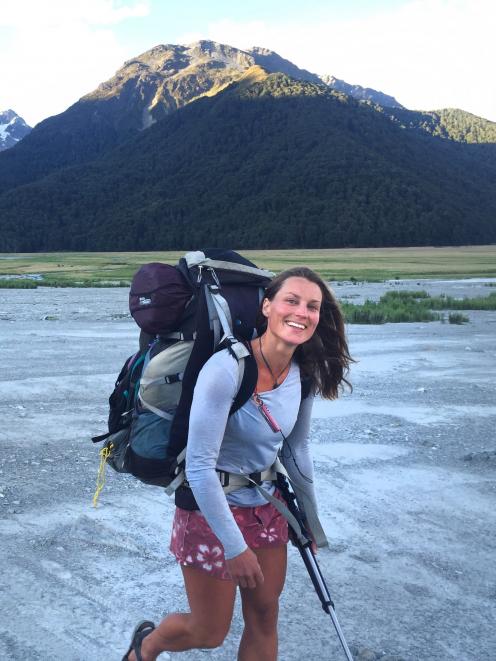 Miriam Lancewood tramping in the New Zealand wilderness
"Life in the wilderness feels very real in the sense that I walk barefoot through rivers, hunt and kill animals and light a fire to keep warm and dry. This all makes me feel very much alive."

Miriam's journey began in 2006 when she left her native homeland in Holland armed with a bachelor's degree in physical education.

She describes The Netherlands as very orderly, and having been raised in a family that valued creative independence, she inherently felt congested cities, devoid of natural surroundings, weren't for her.

Her itinerant lifestyle may not appeal to most women and she concedes she could never have imagined herself to be where she is now, if it wasn't for a chance encounter in India with a ruggedly appealing Kiwi male.

Dr Peter Raine, the man she refers to as her husband, partner and soul-mate, successfully enticed her to hike 600km through the Himalayas, leading a fully nomadic existence similar to the Sadhus (Hindu spiritual holy men).

"We looked at these men and thought if they can survive wandering for years in the mountains, then surely we could try too. They were an inspiration to us," she says.

They travelled to Ladakh and hiked across snow-covered mountains, through forests and stark desert landscape, sleeping in caves in the mountainside.

Despite the 30-year age gap, their mutual love of the natural world and the sense of freedom it brought, kept them firmly together.

The photographs Peter showed her and the stories he had told of uninhabited wilderness, vast forests and deep rivers, swayed her in the direction of New Zealand.

"I was very attracted to this country and with such a deep connection to trees and plants, it felt like a very raw and unspoilt place to live."

They settled in Marlborough and she started work as a teacher aide alongside students with behavioural issues. She describes the work as challenging and rewarding.

"We would hike and camp during the weekends and I really dreaded coming back home to start the working week."

Two years later, with their marriage formalised and her residency approved, Miriam and Peter began to have itchy feet.

They made the decision to "go bush" and in an effort to live a simple, authentic life without clutter, sold most of their belongings.

"It's exhilarating to be free of possessions. If we have too many things, we lose sight of that feeling of freedom."

The one thing that has never left her side however, is her pocket knife that she's had since she was 10.

They prepared themselves for the wilderness with 10-day hikes, wearing sandals in rivers with freezing temperatures to endure numb feet, practised lighting fires in the rain and read literature on edible and poisonous plants.

Miriam elected to take charge of the hunting and learnt how to use a bow and arrow.

She describes some fundamental changes that she noticed after their first few weeks off-grid in the Marlborough region.

"It was a relief to be back amongst nature, living totally without time. It brought Peter and I so much closer and I had this magical kind of energy, feeling so much stronger and more confident."

She learnt how to build a hut and to hunt, trap, skin and butcher wild animals.

Her first attempt at killing a possum went horribly wrong and she says she was traumatised by the process. Finding it difficult to hunt with a bow and arrow, she quickly switched to a rifle.

Peter's previous experience as a chef meant he was an ideal choice for foraging and cooking duties.

"There are no gender-specific jobs in the wild and no-one is judging. Being younger, my eyes and ears were better than Peter's for hunting. Your senses are heightened in the bush and I found the process of following a wild animal very intuitive," she says.

Despite her vegetarian upbringing, Miriam realised if they were to survive the winter, they would need to eat meat.

"At first I was hunting with my bow and arrows and I managed to shoot a goat. I followed it and then chased it down, using my knife to kill it. It was a terribly confronting experience and from that moment on I knew I had changed and I realised I'd become quite wild. Any social norms and cultural conditioning I'd previously had, went out the window."

She hunted for hares, rabbits, possums and goats and says although it felt strange killing and eating an animal after living life as a vegetarian, she justified it given they were introduced pests.

Their one-year plan to live in the wild grew to six as the couple moved around various parts of New Zealand.

As they travelled, Miriam wrote letters to her family in Holland and asked various hunters they met along the way to post them. The correspondence gradually accumulated and the colourful experiences morphed into adventurous stories. Her younger sister Sofie encouraged her to continue and within a year her reflections formed the basis of her memoir, Woman in the Wilderness.

Miriam describes their resolve to walk the 3000km Te Araroa Trail from Cape Reinga to Bluff as the beginning of their walking "bug".

They spent the past year trekking through Europe. Their adventure began in France, hiking through the Rhodope mountain range into Bulgaria and Greece. Miriam says the region has a rich cultural heritage, and includes spectacular river gorges and large caves that people can shelter in. After walking through Switzerland, Austria and Germany, they began the 540km trail known as the Lycian Way, in Turkey.

"The greatest difference between our New Zealand experience and the European one, was having to deal with so many people. We weren't allowed to freedom camp so we had to find someplace hidden away from the tracks. It was difficult to rest anywhere for more than a few days and sourcing fresh drinking water was a real problem in Western Europe and Turkey."

She says they found the backpacking tiring and their next adventure in the Western Australian wilderness will be free of heavy backpacks.

Miriam is adamant that their simple life in New Zealand was hard to beat.

"We ate healthy food and we had no financial worries whatsoever."