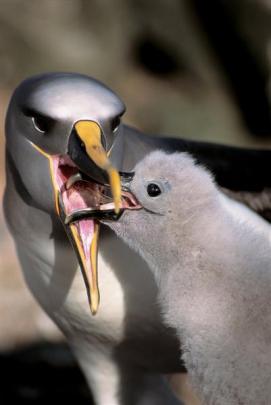 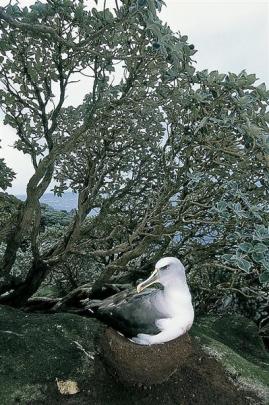 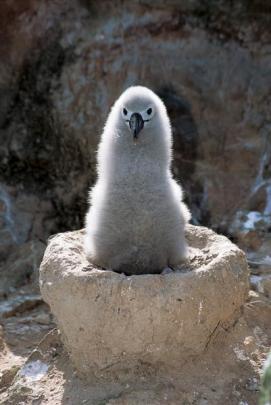 In this extract from the new book Albatross: Their World, Their Ways, award-winning wildlife photographer Tui De Roy looks at the secret life of the Buller's albatross.

Dawn on The Snares, 200 kilometres (125 miles) southwest of New Zealand, is the moment when their unique character resonates with the most powerful, otherworldly impressions.

Not only are the steep granitic islets deeply indented by the incessant action of the gnawing, rumbling sea, they are also crowned by a shaggy, interwoven topknot-like forest of tree daisies, Olearia lyallii.

The grey-green foliated hood spills over the cliffs and tumbles down steep gullies, overhanging the sea in many places.

Come the first hint of daybreak, the strangest clamouring begins to emanate from these dark thickets.

The sound escalates until it overwhelms the roar of the wind, pulsating louder and louder from every valley and ridge, giving the impression that the land itself is lowing like a huge, restless beast.

Only as daylight gives form to the canopy line against pink scuttling clouds are the authors of this unearthly din revealed.

In a crescendo of sound and motion, hundreds of thousands - nay, two million - sooty shearwaters are departing for the day.

They stream out of the forest like a feathered torrent and launch themselves into the air from jutting boulders, muddy ledges and gnarly tree trunks.

Mottled petrels, prions and tiny diving petrels are also departing, although they do this more surreptitiously than the multitudinous shearwaters.

Once the sun peeks over the horizon and the last of the night shift has departed, the islands return to daytime normality.

Small fernbirds and even tinier all-black tomtits busy themselves picking insects along the forest margin, while a shy snipe ushers its chick into the concealing undergrowth.

A bevy of Snares crested penguins, endemic to the islands, go tottering up a narrow stream bed into the forest interior, screeching and squabbling as they slither and splash through dark puddles.

Further up they come upon a large sleeping bull Hooker sea lion (a species also restricted to New Zealand's far south) and scatter as he growls and lunges at their passage.

Even in daylight, the forest is an eerie place.

The rough, wind-tortured trunks are warped and tangled.

The thick canopy of broad leathery leaves, only a few metres high, keeps out most of the buffeting wind, as well as the light.

The bare peaty ground, riddled with thousands of gaping petrel burrows, is slimy black and as slippery as oil.

At pains to avoid collapsing petrel nests, I duck, bend and wriggle over, under and in between trunks and branches twisted like the crooked arms of trolls.

This Tolkienesque world seems like the most unlikely place ever to encounter an albatross colony.

And yet The Snares are home to more than 8000 breeding pairs of the small and elegantly coloured Buller's albatross, the species' southernmost nesting colony.

Some researchers distinguish it as the southern Buller's albatross, slightly larger than its more northerly relative from the Chatham Islands.

Nimble in flight and agile on foot, they land on grassy ledges and rocky outcrops, then walk confidently into the shadowy forest where they build beautifully crafted mud pedestal nests tucked between leaning tree trunks.

They are alert and active, if slightly less stately than their larger cousins.

In the eye of the beholder this is more than compensated by the exquisite colours of their grey and white facial patterns, ashy forehead and utterly striking orange and black bill markings, which they are not shy to use to best advantage during courtship.

The southern Buller's of The Snares are also among the most thoroughly studied of all New Zealand albatrosses (see Chapter 18).

Season after season the survival rate and nesting success of known pairs have been recorded and the first return of their offspring logged many years later.

The picture that has emerged demonstrates how closely linked this albatross's fate remains to fishing activities.

While The Snares population benefits from scavenging behind ships, those from the Solander Islands (only a couple of hundred kilometres, or 125 miles, further north) suffer, perhaps reflecting different fishing practices on their respective feeding grounds.

Far to the north and east of The Snares, in the Chatham Islands, the slightly smaller northern Buller's albatross nests alongside the northern royals on The Forty-Fours and The Sisters, tiny satellite islets well away from the main Chathams group.

Although considered by some to be a separate species called the Pacific albatross, most researchers agree that the variations aren't sufficient to warrant the split.

The contrast between their respective nesting habitats, however, could not be more extreme.

Unlike the sheltered depths of The Snares' forest, on The Forty-Fours not a blade of grass grows between most of the approximately 16,000 or 17,000 nests crammed within just a few hundred square metres of available terrain.

Every bit of space on the narrow rocky plateau, and even the ledges along the surrounding cliffs, are literally alive with Buller's.

In a neat division of territorial claims, the greener, higher ground is mainly reserved for northern royals.

The segregation appears to stem from the effect of winter storms that may wash over parts of the island when the Buller's are absent, making lower ground untenable for the royals who raise their chicks throughout the winter months.

Where the two species meet it is amusing to see that invariably it is the smaller, cockier Buller's who have the last word, clearing space around themselves with quick jabs and loud insults, forcing the more stoic royals to detour at a safe distance.