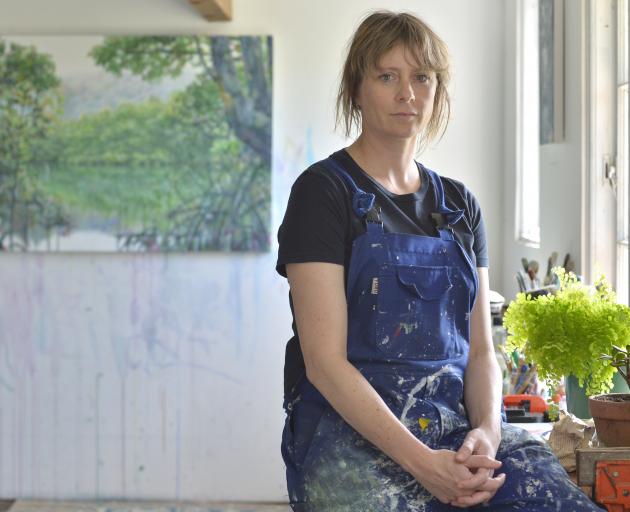 Anya Sinclair in her home studio in Port Chalmers. Photo: Gerard O'Brien
You won't find a human being anywhere in the luxurious landscape paintings created by Dunedin artist Anya Sinclair. Maureen Howard finds out why.

"Purposefully, a long time ago, I started omitting the person from my paintings" Anya Sinclair says of her large landscapes, in which shades of green and touches of vibrant colour depict forest, water and foliage.

Suggestions of lush rainforest can be seen in her work, but you won't find a place you recognise. Rather, using acrylic on canvas, her work reflects her deep love of, and concern for, nature and our role in it.

Anya Sinclair grew up in Laingholm, close to the Waitakere Ranges, west of Auckland. The family house was perched on the edge of a hill, so she spent her childhood looking out through trees to the sea. Thirty years later, Sinclair has returned to a landscape of hills, trees and sea; her new family having made Port Chalmers their home.

"I feel like I have come full circle," she says.

With a mother who was an art teacher, Sinclair began painting as soon as she could hold a brush and has painted seriously as a career since leaving art school in Dunedin in 2009.

"I really haven't had a break at all," she says.

Sinclair considers Dunedin a good place for her profession, as the community is supportive, people have more time and "studios are generally pretty cheap".

After graduating, she and a fellow graduate pooled resources to share a studio. Cold and with little income "we just stuck at it - we embraced it!".

Her landlord discouraged them from using a heater as electricity was included in the price of the rent.

"We basically wore four layers of clothing in winter to paint!"

Painting landscapes has been Sinclair's focus since leaving Otago Polytechnic's Dunedin School of Art. Through her work, she hopes to draw viewers into the landscape, to impart a connection and concern for nature, to share a sense of collective guilt for what people are doing to the earth and to make us more aware of our role as colonisers and how we "try to take advantage of the land and to own it - essentially destroy it".

At the heart of her message is the dramatic loss of nature that is being recorded across the world.

"At the moment, I've been painting anxious landscapes. I'm kind of looking at the thing that we are in the middle of - a biodiversity crisis."

There is a duality in Sinclair's message; the good and bad that happen when people connect with nature, the potential for both fulfillment and damage. She shares the example of kauri

die-back, which is unwittingly spread on the feet of people trying to get close to nature.

Sinclair wants her paintings to say: "Come into nature, but it might be bad for it".

Sinclair's concern for nature is not a recent phenomenon.

"At art school, I was painting dead birds in the forest, so really very overt messaging."

Now her messages are more subtly imparted through painting devices that not everyone perceives.

"I don't have dead birds now but these monster-like eyes and forms and hands are creeping into my plant forms - which are a little bit sinister but only certain people see them really."

Sinclair uses elements of fantasy to emotionally engage her viewer, to connect with and be affected by nature.

"By creating a slightly fantastical landscape that is both familiar and unfamiliar at the same time, I'm really trying to invoke feeling."

The sensation of depth in the paintings is quite deliberate, as Sinclair draws the viewer in with a device that she calls her "foliage gate". A frame of foliage around the edge of the painting "places the viewer in the foreground and they are pulled back into the work", she says. "They are kind of framed."

About 10 years ago, Sinclair decided to have no people in her paintings.

"With no figure to look at, you are freed up to go into that illusion of landscape and the viewer has no other option but to feel complicit in this negative effect that we are having on the natural world."

To generate feelings of self-awareness in the viewer, devices that repel as well as draw are part of her artist toolkit.

By first fostering a connection with nature and then awareness of the self, Sinclair aims to challenge unconscious assumptions of colonisation that relate to using and exploiting the earth as a resource.

The subtle new darkness that has entered Sinclair's artwork is counterbalanced by her decision to have a child and to rear her son, now aged 3, with a sense of hope. Her husband, Dunedin City councillor Aaron Hawkins, shares her concern for the state of the planet.

"My husband and I are always thinking about it. We almost didn't have any children but I guess we are trying to bring up Emile so that he is aware of these things in the best way possible, looking forward with hope. Because it's easy to get bogged down by it."

Sinclair is one of a growing number of artists who are individually addressing environmental issues. She sees her work as "inherently political".

For artists like her, art has a power about it and "those who want can take something from it".

She would like to see art become more accessible for everyone, in public spaces not attached to galleries.

"We've got all these empty building in Dunedin," she says.

Anya Sinclair is working on an exhibition titled "outstanding Natural Beauty" that will be on display in July, at Olga in Dunedin.