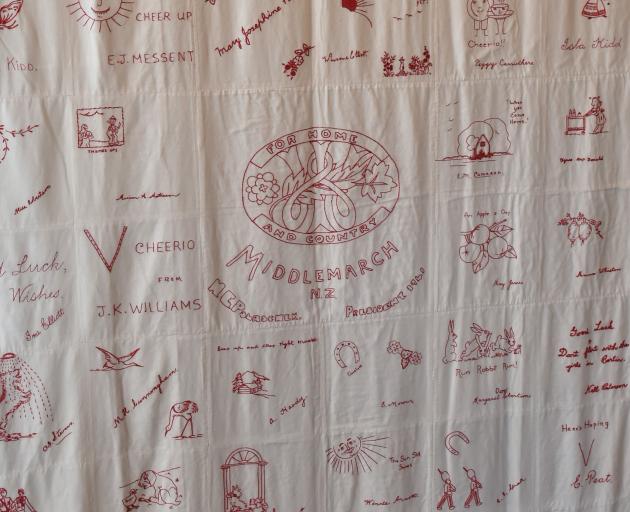 Photo: Supplied
The women of the Middlemarch area may have been suffered from the loss of loved ones fighting in battles on foreign lands, but World War 2 did not jolt their optimistic spirits.

A feature at the Middlemarch Museum is a quilt created by 57 women from the Strath Taieri Country Women's Institute in 1941-42 and sent to the Red Cross, intended for the Middle East.

In 1945 the quilt was given to an ambulance officer, Margaret Bence, of India, by a soldier.

She took it home to India and it was passed through two generations of the family until in 2016 the museum discovered it was in the hands of Queensland resident Chi Chi Murray, Margaret Bence's granddaughter.

Chi Chi Murray had taken the quilt with her as she lived in about 10 countries around the world, from Europe to Africa, yet it was still in good condition.

The quilt, which was not padded for warmth, was known as a ''comfort quilt''.

''They still make them now, and they've got them in places like Afghanistan.

''We had a man come in the other day, an ex-army man who told us that.

Before the quilt was made, members of the women's institute sent parcels, left messages in them and got letters back from soldiers.

Later in the war, that was banned.

''I wonder whether this was just a nice wee way to get their message out there,'' Mrs Coburn said.

The museum had researched all the women who made the quilt and was putting together a book on their lives.

''While thing are horrible in the world around them, these messages are ones of optimism, of good cheer.

''This is what was going on behind the scenes.''