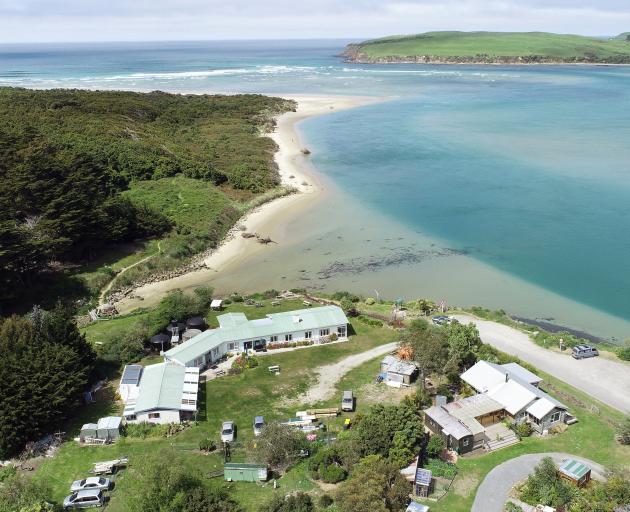 Newhaven from the air. PHOTOS: STEPHEN JAQUIERY
Sea lions, shipwrecks, saddles and scenery are the summer offer du jour at Newhaven, the stunning small town you may never have heard of, but should visit. Courtney White journeyed to the township to discover what it had to offer.

Driving to Newhaven, a small township in the south of the Clutha district, makes an enjoyable, easy trip from Dunedin.

Once you pass the airport at Momona, the landscape quickly blends into something of a rural daydream, with bright blue skies providing a backdrop to rolling green hills, dotted with ambling sheep, cows and the odd grazing horse. 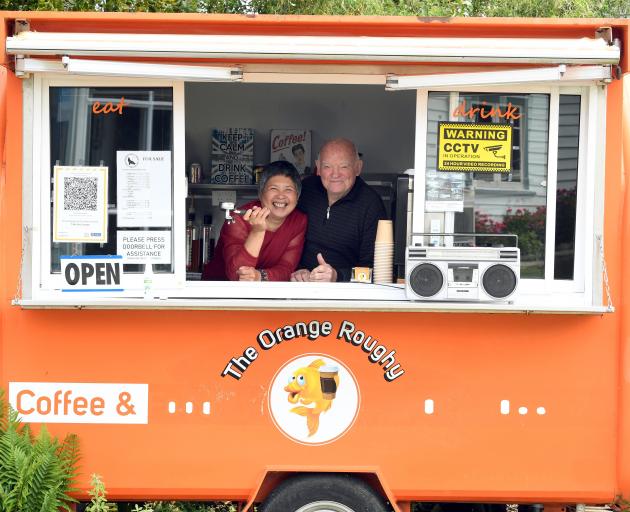 The Orange Roughy, Newhaven’s answer to Starbucks, run by Ester and Jack Johnson.
About 30 minutes after passing through Balclutha, a small sign points left towards the quaint holiday destination.

You would be forgiven for missing it.

The entrance to Newhaven is marked by grazing horses, which are often available to take visitors on sightseeing trips around the area.
The entrance into the township by Newhaven road is unassuming — a sharp turn into a gravel road, flanked by the harbour mouth which glints on the horizon as you round the bend.

An old ship bobs, skewed on an angle, at the water’s edge, giving the village the appearance of an old pirate bay, a feeling only compounded by the sight of the nautical ropes and anchors adorning gates and letterboxes.

Along the road to the township, which consists of several small family-run accommodation sites, cribs haphazardly dot the landscape, many of them weathered in a pleasant way by the sun and sea air.

Many of the cribs are often empty, predominantly used for get-away weekends and summer holidays. 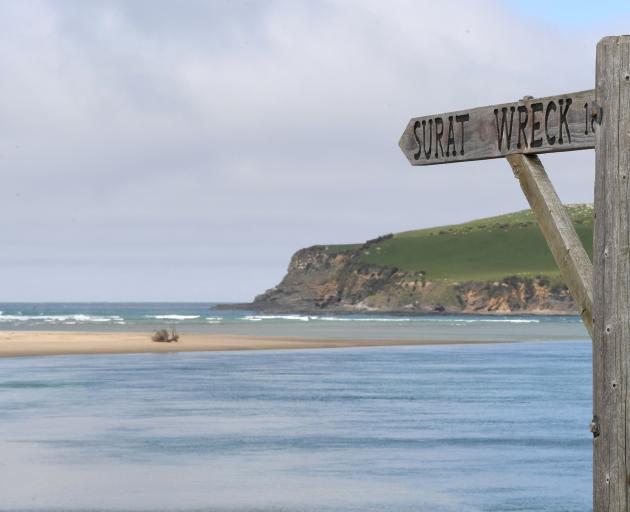 A signpost marking the location of the wreck of Surat in 1874 now points towards the Owaka heads.
As for those who permanently reside in the small Catlins community, about 6km southeast of Owaka at the mouth of the Catlins River, there are only around 10.

Two of those residents are Jack and Ester Johnson, who run the Surat Bay Lodge, which sits at the end of Surat Bay Rd as it turns from gravel road into sandy beach.

As the name suggests, the four-bedroom lodge, perched on a small cliff, overlooks Surat Bay. 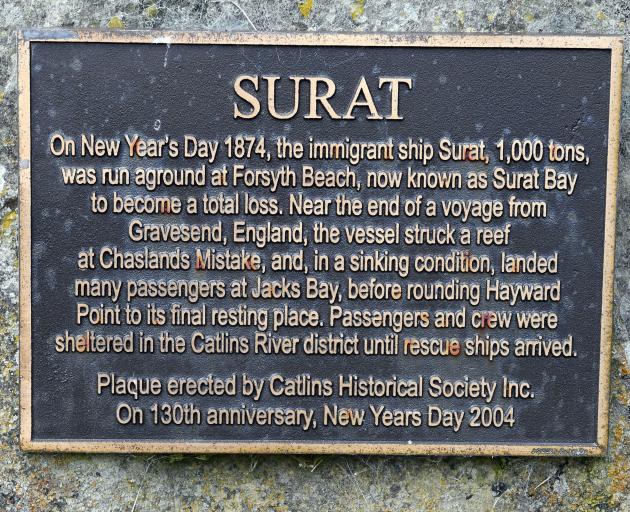 A plaque erected by the Catlins Historical Society on the 130th anniversary of the shipwreck which gave Surat Bay its name.
Despite the fact that almost every resident on the road owns and operates accommodation, Mrs Johnson says there is no sense of competition between neighbours.

While in winter (and through Covid-19 lockdowns) the place can be as quiet as you might expect from a remote village with 10 residents, summer brings tourists in droves, Mrs Johnson says. 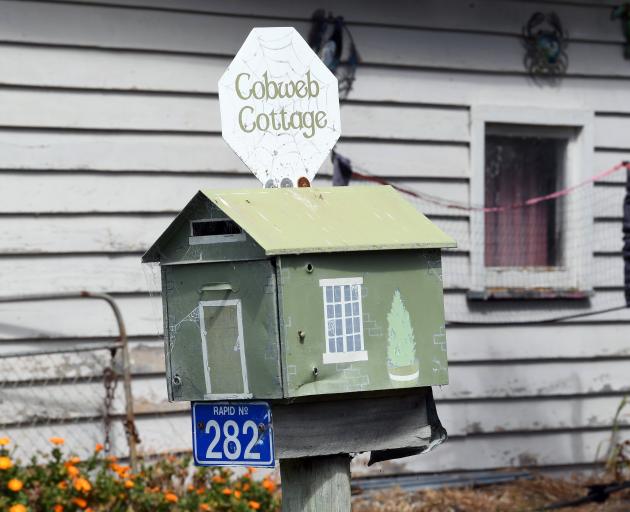 Tiny house letterbox ‘‘Cobweb Cottage’’ marks the entrance to Newhaven township.
Visitors come to relax, swim, sunbathe and spy on the lounging sea lions who take up residence at the beach.

With no Starbucks in the vicinity, holidaymakers can refuel on coffee or hot chocolate from Mrs Johnson’s bright orange coffee cart, The Orange Roughy, just inside the gates of the lodge.

Newhaven, which is flanked by not only Surat but also Cannibal and Jacks Bays, has an interesting history, memorialised by the Johnsons with a plaque installed on Surat Rd, by their old property.

Surat Bay is named for the ship Surat, which was wrecked on its shores in 1874. 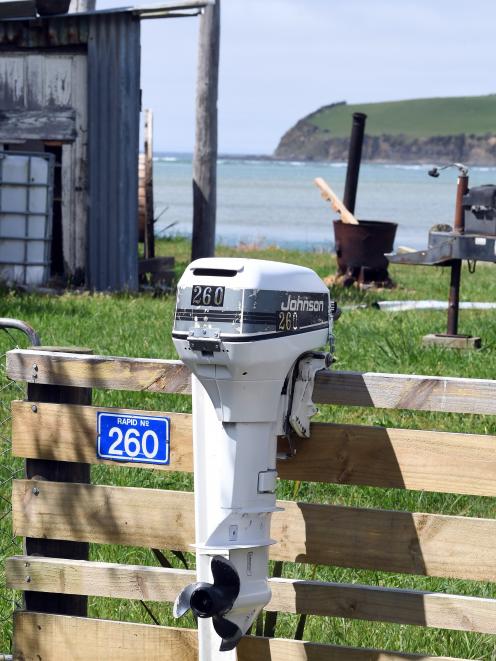 Funky letterboxes adorn multiple fences in Newhaven, like this one made of a repurposed boat motor.
The ship was originally from India, but at the time was acting as a passenger and cargo ship from the UK.

On New Year’s night in 1874, Surat was sailing into the bay, Mr Johnson says, when she ran afoul of a reef and began to take on water.

After futile attempts to patch up the hull using concrete powder, the captain decided to drop passengers on to the shore at Jacks Bay, before coming to rest at what would become Surat Bay.

A sign adorns the hill above the beach, pointing to where the shipwreck once lay. It has now rotted away completely.

A short walk along the shoreline, Surat Bay slowly becomes Cannibal Bay, which owes its name to the burnt human remains once found by a surveyor rather than to any man-eating past, at least, as far as we know, Mr Johnson says.

‘‘People who stay here always ask me if it’s safe to visit Cannibal bay,’’ he said with a grin, adding that the name conjured up imagery of man-eating locals running around there, lying in wait for unsuspecting tourists.

Though cannibals are rare, a major attraction for visitors is the wildlife, with sea lions abundant on Surat Bay, and yellow-eyed penguins nesting in nearby Jacks Bay.

She said there were times the animals would amble up from the beach on to the road to lounge in the sun.

Rather than try to move them, she would simply place road cones around the animals and let sleeping dogs — or sea lions — lie.