Blat through the Baltics 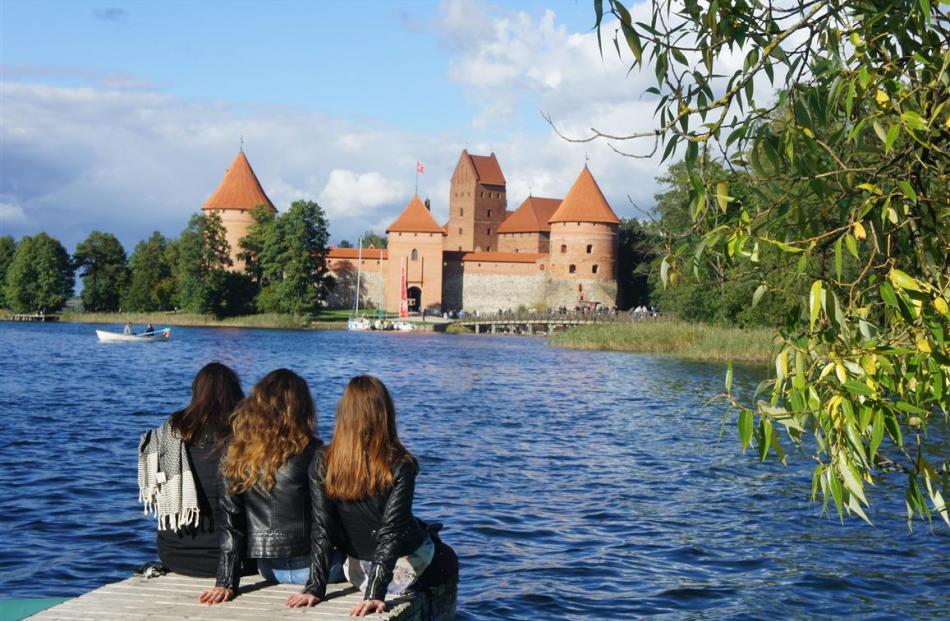 Trakai Fortress, the summer residence of the Lithuanian Grand Duchy, is an island fortress reached only by wooden bridges or pleasure boats. Photos by Joe Dodgshun. 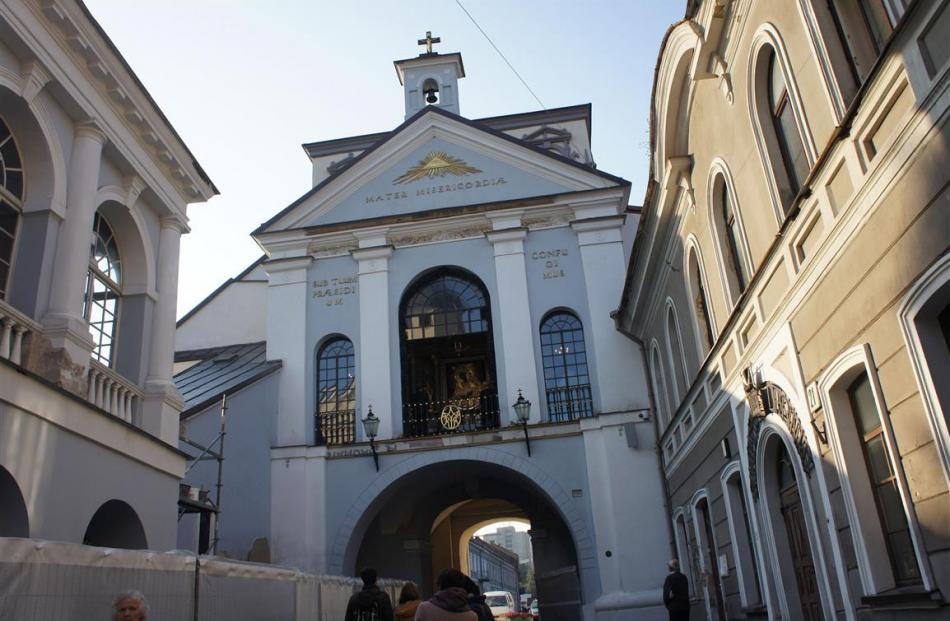 Visitors ponder the Gates of Dawn, and above, the popular pilgrimage point of the Chapel of the Blessed Virgin Mother Mary. 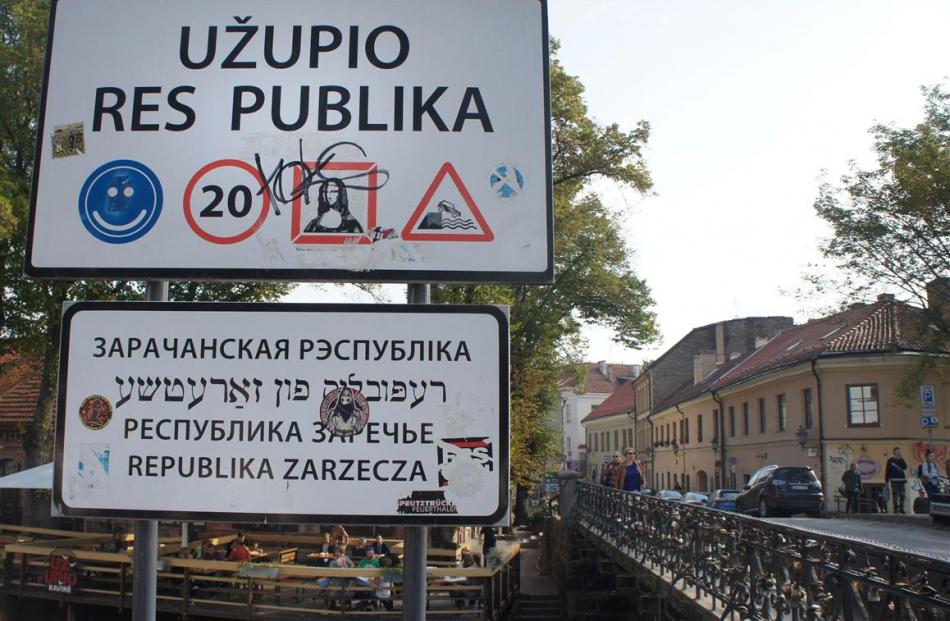 Arguably Vilnius’ most bohemian quarter, the Republic of Uzupis began with a statue of Frank Zappa and now has a constitution including the clause, ‘‘Everyone has the right to be in doubt, but this is not an obligation’’. 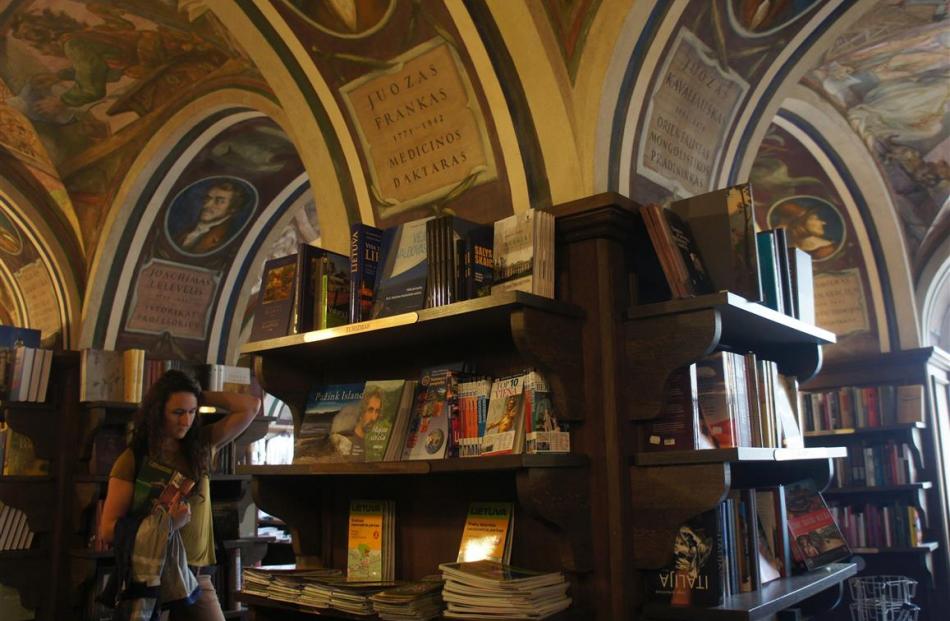 The frescoes in Vilnius University’s Littera bookshop mark the achievements of some of the most illustrious Lithuanians who frequented its halls since its foundation in 1597.

Vilnius is a green, relaxed and underrated city, one shaking off a tumultuous century to become an attractive European centre of business and culture. Former ODT reporter Joe Dodgshun settled in to experience Lithuanian capital life, a slice of bohemia founded on Frank Zappa, and leaden zeppelins.

The chorus of snoring in my hostel dormitory gives way to the reverberating tones of the church organ across the road.

Roused, I peer out the window at tourists on the street below, who are trying hard to look impressed at the romantically named, but modestly proportioned Gates of Dawn.

Stepping out, I navigate a Bermuda Triangle of cafes and bars, and ascend the spiralling path behind the gleaming mass of the Cathedral of St Stanislav and St Vladislav.

Legends say on this hill the Lithuanian Grand Duke Gediminas dreamed of a howling iron wolf, one with a terrible cry as loud as hundreds of its kin.

The pagan priest Lizdeika advised this as an omen meaning Gediminas should build his capital here, the voice of which would echo all around the world.

Around seven centuries later, some of us know Vilnius via social media, as the city whose mayor enforces parking transgressions with a tank.

Others appear not know it at all.

However, Lithuanians have some bragging rights.

For a start, Vilnius is eastern Europe's greenest city, boasting the cleanest air of any European capital.

From the vantage point of Gediminas Tower, it is easy to see why.

The Vilnius Old Town below seems to exist as a symbiosis of greenery and edifices, the latter appearing to grow out of the wooded hillsides embracing the city on one side.

The architecture is a roll call of history: glorious baroque churches, some with divine interventions like TV broadcasting antennae, wonderfully ramshackle wooden houses, Soviet-era apartment buildings and, behind me, the glass towers of the modern city centre.

Each has secrets to discover.

Vilnius University's Littera bookshop charms browsers with an arched roof full of frescoes, the excessively gilded Chapel of the Blessed Virgin Mother Mary is perched above the Gates of Dawn, and climbing lovers have created a bouldering centre in the depths of a shabby Soviet sportshall, just outside the old city.

Here I meet Dziugas, a lanky, bespectacled economics graduate and, as we clamber up and fall off bouldering routes, he tells me about the city's rapid growth in the past few years.

Scandinavian, Russian and US companies are investing heavily here thanks to low operating costs, highly qualified locals (40% have been through higher education) and welcoming business regulations.

Last year, the country launched a floating liquid natural gas (LNG) terminal to lessen its dependence on Russian gas, the first Baltic country to do so.

Add to that Europe's fastest internet connections, a thriving start-up ecosystem and a boom in office construction and it is no wonder people like Dziugas are busy.

For all this, Lithuania is a young European country, which only became independent from the Soviet Union in 1991 and switched to the euro early this year.

Even if the historical ties between Lithuania and Russia are lessening, reminders of the decades of the Soviet presence are everywhere here.

In a second-hand bookshop, I find matchbox-sized children's storybooks in Cyrillic script and later stumble across a pair of shoe prints in the stone of Cathedral Square; a reminder of the two million people who joined hands from Vilnius to Tallinn in a call for Baltic Freedom in 1989.

Like Latvia and Estonia, Lithuania received a raw deal during the second world war, being occupied by Soviet forces, then the Nazis, and once again by the Soviets.

The tragedies of these times and the fight of Lithuanian partisans against the Soviets are documented in detail at the Museum of Genocide Victims.

The oppressively grey weather outside sets the tone as I pass through thickset doors into the silence within.

This building acted as the headquarters of both the Gestapo and the KGB, and the basement prison cells are kept the way they were left, alongside interrogation rooms, cramped courtyards and the stifling horror of the underground execution chamber.

However, it is a Christmas postcard in one of the upstairs exhibitions that catches me off guard, an attempt at cheer and bravado by one of the countless thousands of Lithuanians deported to Siberia during Stalin's reign, any joy intended offset by the sender's gaunt portrait.

Back outside in the city, a happier relic of Vilnius' history beckons, or at least, a place that is happier today.

Crossing the River Vilnia, a sign bedecked with a smiley face and an icon of the Mona Lisa welcomes me to the Republic of Uzupis.

When the city's artists erected a statue of Frank Zappa as an arbitrary symbol to mark the end of communism, no-one expected that it would lead to Uzupis Republic's declaration of independence.

But since this happened, on April Fool's Day, 1997, this rundown, formerly Jewish neighbourhood, emptied by the Nazi Holocaust, has gained plenty of attraction as a bohemian blip in the former Soviet states.

Even though it is now one of the more upmarket parts of town, Uzupis still takes its absurdity seriously.

It has its own constitution, a flag for each season and, since its army of 12 men was disbanded, is simply protected by a statue of a trumpeting bronze angel.

Not far from the laidback restaurant that serves as Užupis' parliament, a wall full of burnished bronze plaques spells out the constitution.

The decidedly undecided: "Everyone has the right to be in doubt, but this is not an obligation.''

And the thought-provoking: "Everyone is responsible for their freedom.''

With an overwhelming amount of history and tongue-in-cheek protest to process, I board an almost-completely empty bus, and settle in for the half-hour ride to the medieval lake fortress of Trakai.

About 90 minutes later, having boarded the wrong bus, I finally arrive.

The timber houses are natty and painted in a pastel palette, contrasting wonderfully with the woods that encroach on the many lakes intersecting the landscape.

On one of the largest of these lakes, accessed only by a long walkway spanning two islands, stands Trakai's terracotta-hued form; its low turrets, keep and heavy walls keeping watch over a flotilla of pleasure boats.

Trakai was the summer residence of the dukes of the Grand Duchy of Lithuania, and they ruled over the biggest country in Europe in the 14th-15th centuries, an empire stretching from the Baltic Sea to the Black Sea.

The fortress itself is a restored version of the crumbling ruins left after the 17th century wars between Poland and Russia ravaged the country, but despite the fact that some of Vilnius' downtown apartment buildings are older than the reconstruction, the vision of Trakai Castle reflecting in the water in the changing light is still an arresting sight.

Soon, I again walk the streets of Vilnius, pondering the impression that despite its growth, the pace of the city cannot be described as breakneck.

But after sitting down to a meal of cold beetroot soup and cepelinai (zeppelins) - bacon sauce smothered, meat-filled potato dumplings with the heft of several small guinea pigs - there is no way I am going anywhere in a hurry, either.