The view coming in to land at Walter Peak. PHOTOS: MATTHEW MCKEW
Before Covid-19 struck, when Queenstown was awash with visitors, there was rarely a spare seat aboard  TSS Earnslaw or on scenic flights out of the airport. But now things are a little different, so Matthew Mckew went to find out what benefits there are to those exploring the Wakatipu Basin.

Discovering the Wakatipu Basin by land, sea or air is forever a rewarding experience.

The stunning mountains, the glaciers, the clear blue waters, all leave one wide-eyed and agog.

Deciding how to travel is often a matter of time and cost, but with the latest partnering between Air Milford and Real Journeys, it is simply a matter of booking.

The trip can be booked alone or offered as an alternative option when Milford Sound is off the cards.

It begins with a flight, continues with a farm tour, and ends with a cruise aboard TSS Earnslaw.

There was a buzz of excitement among my fellow passengers as we were introduced to our pilot and guide Thomas Watson at the Air Milford hangar.

Friendly llamas nibble treats from children.
We would be making use of the fine weather to fly close to Coronet Peak, head over the gold rush areas and spy on some of the sheep stations.

Our mode of transport would be the Cessna 185, a beautiful, small aircraft that can seat up to four passengers. Larger aircraft were available for bigger bookings.

Before long we were in the air, cruising over the Kawarau and Shotover rivers, our guide and pilot showing us historic points of interest.

We flew towards Skippers Canyon and the nearby skifields, taking in the gorgeous views and jostling to get snaps.

We saw the snow-capped Richardson Mountains, before turning towards Glenorchy, spying Paradise, Mt Earnslaw and just about at our eye-line, Earnslaw Glacier. 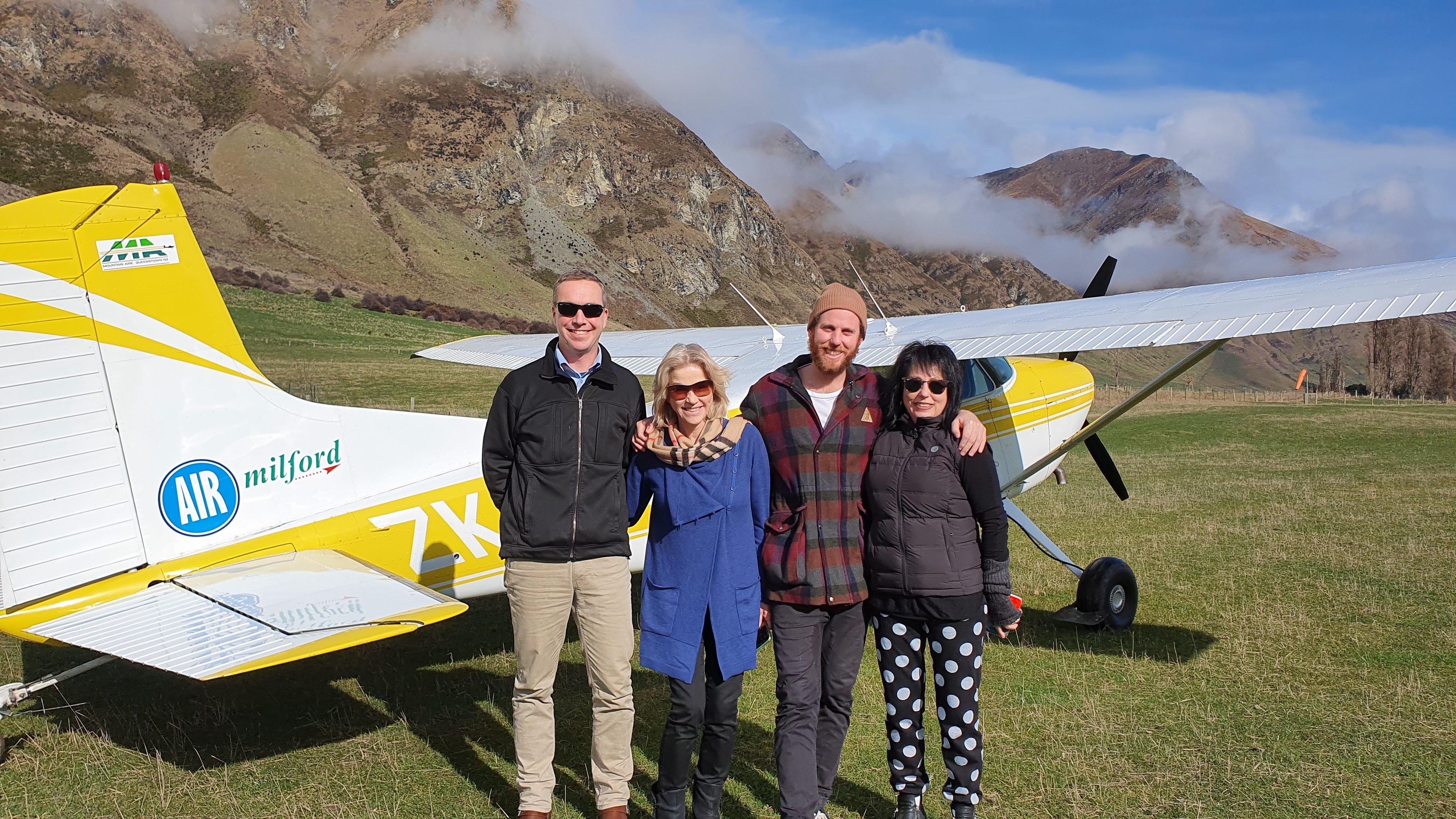 Further on we spotted the Mt Nicholas High Country Sheep Station, before turning back on ourselves to land on a grass strip at Walter Peak.

The gentle descent ended a pleasurable ride and we disembarked to pose for pictures next to the plane, with the mountains in the background.

Once sure we had pictures worthy of The Gram, we hopped on a minibus and drove up the road to the station proper.

Passengers arriving on the Earnslaw joined us and we settled on wooden benches around a stage for a sheepdog display by rural demonstrator Aled Jones and his trusty dogs, Kim and Liz.

Flying over Skipper’s Canyon.
Aled showed how by simple, clear commands or whistles, he could easily have Kim round up sheep without the need for shouting or getting himself out of breath.

The moment all the children had been waiting for came next, with a tour of the station and a chance to feed the animals.

Aled told us of the animals’ heritage and what they are used for, as children shrieked in joy or disgust at the strange touch of a beast’s tongue against their palm.

The end of the tour came with a visit to 10-week-old puppy Fleur, who proved the most popular animal of the day.

The delicious high tea offered aboard TSS Earnslaw.
There was a chance to shop for farm products before the unmistakable horn of the Earnslaw sounded and it was all aboard.

Once on, passengers could experience one of two options.

Those who had booked before —and paid a little extra — could settle in the saloon for a high tea befitting the Queen herself.

On the table were two stands of food, each with a layer of sandwiches, cakes and finally scones, cream and jam.

Once settled, tea and bubbles were offered and it was time to toast a wonderful trip back as the Earnslaw gently pushed the scenery past the window.

For those who did not book in for high tea — or were a little quicker to scoff their scram than us — there was a chance to see the engine room or explore the various historic rooms.

Tea, coffee and refreshments were available from a cafe above the saloon, which offered another fine view of the lake.

Finally we pulled into Queenstown, bellies full and fabulously satisfied with a grand day out.

Whether you book for tea or not, this is a cost-effective way to take in the Wakatipu’s stunning surroundings and experience a little of New Zealand’s vital agricultural heritage.