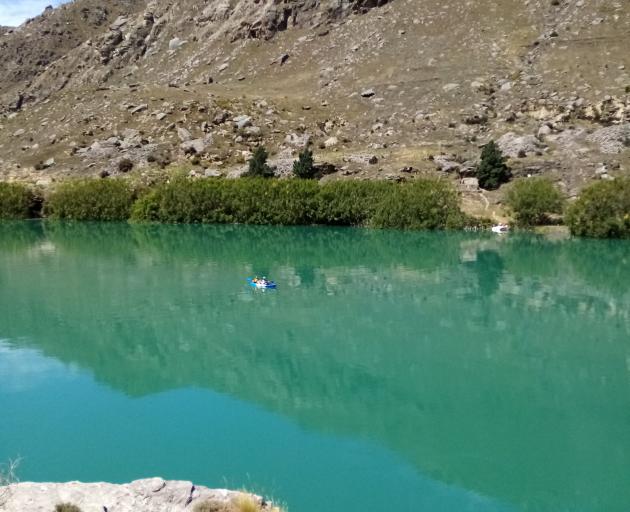 I’m told one of the small islands just above the Roxburgh Dam has a secret grotto, built by a father for his daughters. Or maybe an uncle for his nieces. Or maybe for his own private use.

This much is possible: there’s an island with something on it that not many people know about.

But I was told too late. I had already paddled past and gone home, to Dunedin.

There are several small islands in the Roxburgh Gorge, just above the dam. Lumpy top knots of rock that would once have looked quite different, before the plug went in and the bath filled up.

I paddled past them all, without stopping to investigate. It had occurred to me to do so, but the day was getting late and there were people waiting.

Some hours earlier our standard-issue plastic-canoe Roxburgh Gorge adventure had begun at Alexandra. Slightly later in the day than originally planned, as we’d stopped at the book sale at the Roxburgh library. I’d picked up a copy of Hamish Clayton’s Wulf for a dollar. Very good it is.

The Roxburgh Gorge is that devastatingly turquoise slash of blue that stalks the road between Roxburgh and Alexandra. You see it then you don’t. Then you try to spot it again without driving off the road, as its magnetic colour veritably pulses against the dry grey-brown through which it winds.

You can cycle alongside the river, the Clutha Mata-au, down in the gorge for a good bit of its length. But not all the way. There’s about a third (13km) in the middle that’s still the preserve of the water-borne. That being the case, our party of adventurers arrived in Alexandra with the canoe on the roof and a couple of bicycles on the rack.

Our plan was to string the canoe between the two bicycles for the first stretch, which is a fairly gentle cycle. Then put the bicycles in the boat for the second stretch — a little bit America’s Cup style — and then cycle out the last leg, again doing portage.

Nah, not really. That would be stupid.

Our plan was for three of us to set off, two in the canoe, one on a bicycle, then swap around a bit.

As it turned out, I canoed the first bit then swapped out with one of my sons. The two sons then canoed the second bit while I cycled back to Alex to get the car and take it down to the dam. From there, I was to cycle back up along the cycle track to meet them, and have another spell in the canoe.

It all worked pretty well.

When I met the two boys again they’d rescued a floating pumpkin, which now had a name, and a collection of driftwood.

I think pointless collecting may be the defining characteristic of humanity. No other creature would collect a damp pumpkin to no good purpose.

All in all, I’d recommend it. There’s peace and quiet, for the most part, gold rush-era historic remains, quails, lovely scenery and a current right in the Goldilocks zone, neither too much of one thing nor the other.

• Roxburgh has several excellent coffee shops including, but not limited to, the Frost Pot and ‘‘The Store’’.

• Gumnut Creations, an upcycling clothing store that makes clothes out of blankets.