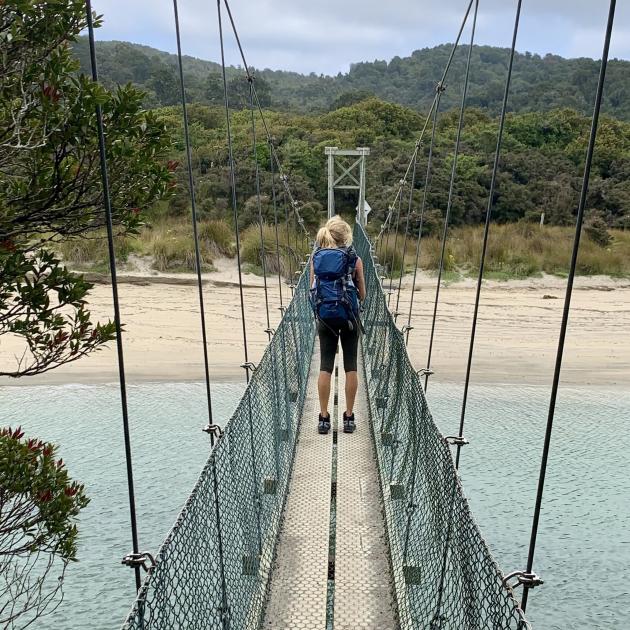 Swing bridge at Maori Beach.
Lindy Davis visits Stewart Island and gets lost in its beauty.

There are some places on the planet you wish you’d prioritised before they were spoilt by tourism. Stewart Island isn’t one of them

Home to more than 1000sq km of native forest teeming with birds, deserted beaches and pristine water, it’s hardly surprising this remote piece of land sits determinedly on many a Kiwi bucket list.

If you haven’t yet managed to see New Zealand’s southern-most inhabited island, don’t worry, time is on your side. A large proportion of the island is National Park and will likely look the same or better a decade from now.

Its geographical isolation has ensured the island is safe from the inevitable development associated with many tourist destinations.

You can choose to fly from Invercargill or take a one-hour ferry trip from Bluff across Foveaux Strait. In either case, be prepared to be spontaneous with your plans.

Inclement weather, as in my case, will mean the flight could be delayed or cancelled and passengers will be transported to the ferry terminal.

The process is quick and painless and before long I watch as the ferry nudges up alongside the wharf at Stewart Island-Rakiura, land of the glowing skies.

The small town of Oban in Halfmoon Bay is busy with charter fishing boats and water taxis, waiting for new arrivals.

It’s the tail-end of the New Zealand summer and I’ve packed a few layers of merino. The weather in this part of the country is unpredictable and with rainfall anticipated up to 265 days of the year, it’s reasonable to expect four seasons in one day.

A five-minute drive takes us up Nicol Hill towards Stewart Island Lodge, one of the island’s stately original homesteads.

With a population of just 400, our driver concedes it doesn’t take long to get to know everyone.

But this isn’t really a destination for people to meet people; it’s more about escaping all that.

I’m advised to book dinner in advance at the South Sea Hotel. There are limited alternatives on the island, aside from a couple of lodges that prioritise guest meals and two takeaway options in Oban.

I spot the "Kai Kart", a converted caravan with 20 or more people queuing up outside. I decide they must be good if people are prepared to wait so patiently for fish and chips.

Much of the island’s main industry comes from cod, crayfish, paua, mussels and salmon, so it stands to reason the fish must be fresh at least.

Clutching a parcel of deep-fried cod, chips and jalapeno pops, we sit on the grass in front of Halfmoon Bay School and gaze at the view, undoubtedly the best-located classrooms in the country.

The island, named after William Stewart who in the 1800s navigated the southern coast on his sealing vessel, is steeped in history.

I had anticipated four days to explore Stewart Island, including a segment of the 32km Rakiura loop track as a taster of the three-day National Park walk.

Horseshoe Bay.
We took a short water taxi ride from Halfmoon Bay, past Horseshoe, Lee and Wooding Bays, to arrive at Port William Hut and campsite.

The main resource here in the 1800s was timber, and families of workers lived in remote huts close to milling sites with very minimal resources. The port was populated by whalers and sealers and unsurprisingly seal numbers went from prolific to negligible in a relatively short time.

In 1868, an oyster bed was discovered off Port William and a cannery was built in anticipation of demand. But the venture was short-lived as four years later stocks were completely exhausted.

The trail from Wooding Bay is flat and easy to navigate, making it ideal for various age groups and abilities.

Less than a dozen steps from the beach, I spot a couple of white-tail deer grazing. They appear unperturbed by my presence, which is surprising given they’re hunted year-round in the National Park.

White tail deer at Port William.
Walking deeper through the bush I’m acutely aware of sights and sounds rarely heard elsewhere. One of the more common podocarps in this area is the impressive rimu. Some are now 500 years old and make a noticeable deep creaking and groaning sound that reverberates through the forest.

The majestic totara and rimu used extensively by early Europeans and Maori have survived the milling era and stand erect like forest guardians.

I’m distracted by the whooshing sound of a pair of kereru flying through the canopy. Prolific food from the miro tree attracts large numbers of wood pigeon that gorge on the red berries.

The forest floor is neatly swathed in tree fern and broadleaf, demarcated at regular intervals with lancewood and coprosma. It’s nature at its best, but almost looks like the work of a landscape designer.

A short walk takes you to the original settlement and relics from the sawmill built in 1913 at Maori Beach. Following the track, we cross a swing bridge over a tidal stream at the western end of the beach. The tide is low enough to wade through the creek and continue on the track towards Lee Bay.

The stillness is broken by a sudden cacophony coming from a group of red-crowned parakeets (kakariki) lording it in the branches of a nearby flowering rata.

Chain sculpture at Lee Bay.
A large stylised anchor chain sculpture lies twisted across the track. It symbolises a history of inter-relationships woven together, designed to give Stewart Islanders a sense of heritage and identity.

Enormous chunks of kelp lie scattered on the beach like discarded wetsuits. I pick one up, only to discover it’s on a par with lifting a small child.

There are fantails (piwakawaka) darting around either side of the track hoping to catch insects I might disturb. If you’re partial to enjoying birds, this is without doubt the place to be.

There are plenty of oystercatchers and a few herons scoping the shoreline, but despite the written warnings, no sign of a seal or sea lion anywhere.

We navigate the track around Horseshoe Bay and take a quick detour to Moturau Moana Gardens, a private property with botanic gardens that overlook Halfmoon Bay.

After a brief walk back to the wharf at Oban, we depart for an evening cruise across Paterson Inlet to experience the Wild Kiwi Encounter.

In what is one of the most dramatic sunsets I’ve ever seen, I watch as a group of mollyhawks dive into the water, blue penguins glide nearby on the surface and mutton birds (titi) huddle together on the rocks of "Titi" island. 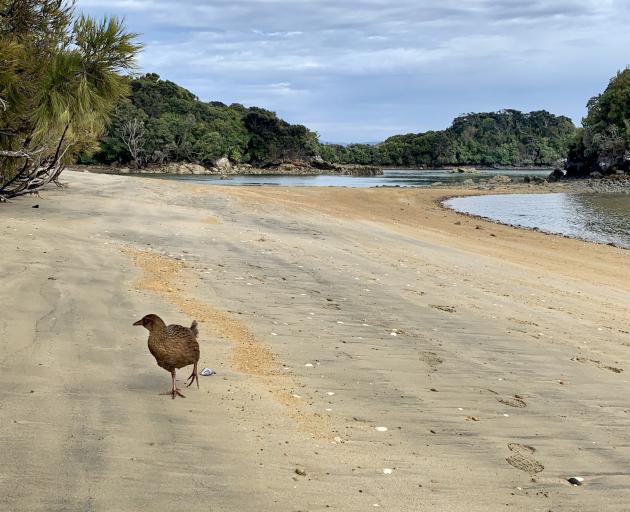 A weka on Ulva Island.
Landing at Little Glory Cove, we are guided by torchlight down a path. It takes an hour or two of walking in silence before we are finally rewarded.

The kiwi sighting, albeit brief, is thrilling. An infrared torch highlights the little fellow busily digging in the bush. After a prolonged period of stargazing, we reach shore around midnight to rise early the next day to explore Ulva Island (Te Wharawhara).

A short boat ride across Paterson Inlet takes you to the predator-free reserve, home to a large variety of endangered native birds. The extensive native forest with flat pathways enables you to hear birdsong from bellbirds (korimako), saddlebacks (tieke) and kaka echoing through the bush.

It’s advisable to spend several hours on this island, taking time to appreciate all it offers.

The Beak and Feathers guide, Angela Karaitiana, appears to know most of the birds and their personal habits. She suggests we exercise patience, saying it’s possible to spot a kiwi despite it being broad daylight.

As if on cue, a large brown kiwi appears from behind the scrub and stomps past me, making its way rather noisily through the bush. It seems oblivious to the paparazzi lined up on the path, fighting for the best angle to photograph.

As I’m waiting for the water taxi, I spot a weka strutting across the bay. No-one paid the slightest attention and I couldn’t help thinking it really needed the threat of extinction for people to truly appreciate it. 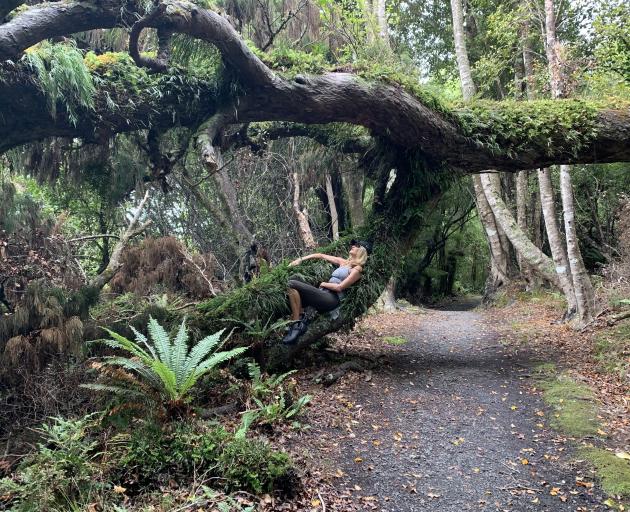 Rakiura track.
The afternoon was spent at the newly opened Rakiura Museum. An impressively curated exhibition worth setting aside time to read testimonies, view memorabilia and listen to fascinating interviews that give insight to the history of Stewart Island and the families that settled there.

The South Seas Hotel is the chief watering hole in Oban and it comes with its own chequered history. The walls are littered with black-and-white photographs reflecting the pioneering days. There’s even a large condom dispensary in the women’s bathroom because, you just never know. 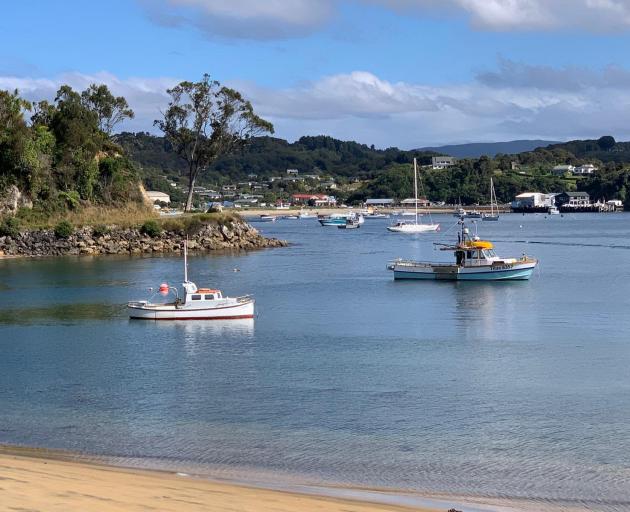 Boats moored at Lonnekers Bay.
Having planned to do the Heritage Walk on our last day, we instead picked up e-bikes from the Electric Bike Depot in Oban and cycled to a few of the historical sights. Most are within minutes of town, but a little further out in Harrold Bay is Acker’s stone house built by American whaler Lewis Acker in 1836 and considered one of New Zealand’s oldest Pakeha-built homes.

Lonnekers Beach and Leask Bay are two picturesque inlets lined with giant blue eucalypts. Remnants of rusted whaling equipment and an old fishing vessel lie on the foreshore, an ugly reminder of a previous life.

A quick cycle across the island takes you to Butterfield Beach and Bragg Bay, both of which would feature in the "most beautiful bays" category of any awards.

With just an hour before the flight, I managed to visit resident sculptor Dave Goodin at Rakiura Jade. The studio has an enviable view overlooking Stewart Island harbour. He encourages visitors to take time to create something special from various offcuts of jade or alternatively browse the gallery replete with artistic pieces he’s crafted by hand. 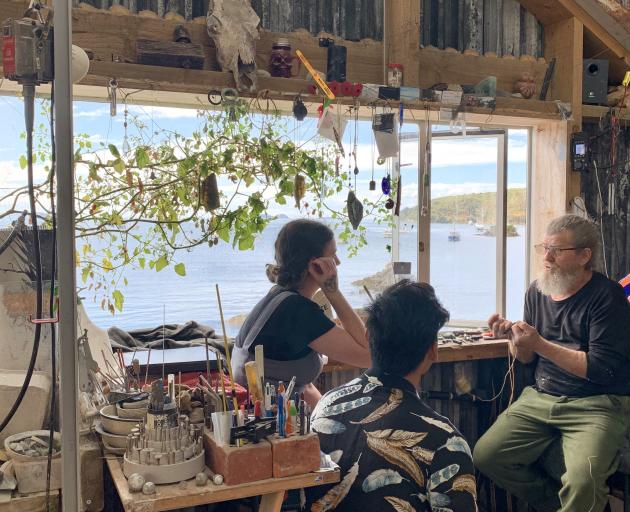 Dave Goodin at Rakuira Jade.
It’s easy to see where the good energy comes from and why he and other locals are equally friendly and fiercely protective of their unique slice of New Zealand.

A founder of modern science in New Zealand and considered this country’s greatest botanist, Leonard Cockayne aptly describes Stewart Island: "The face of the earth is changing so rapidly that soon there will be little of primitive nature left. In the Old World, it is practically gone forever.

Here then, is Stewart Island’s prime advantage and one hard to overestimate. It is an actual piece of the primeval world."