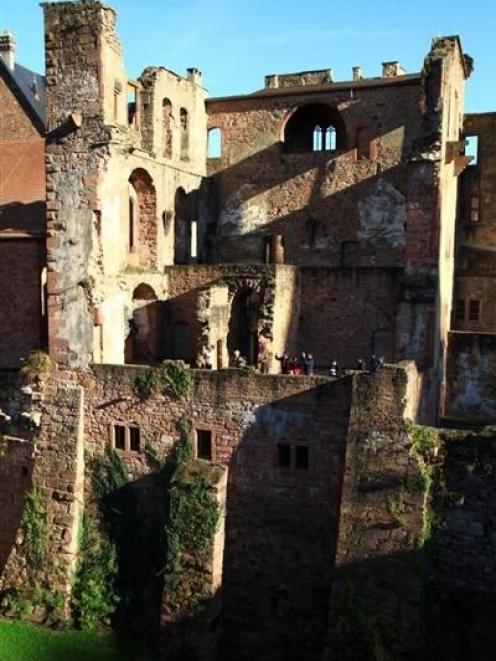 Heidelberg Castle stands on a hill above the town. Photos by Jeff Kavanagh.
They eat sausages and drink beer, but that's not the only similarity between Heidelberg and Dunedin, reports Jeff Kavanagh.

The German language does not muck around. What lies on my plate in the main beer hall of the Kulturbrauerei in Heidelberg in southwest Germany isn't dressed up as "black pudding" or in some other similarly palatable name.

It is what it is: ein Blutwurst - a blood sausage. Dark red and angry-looking, it shares space with some Leberwurst, Leberknoedel, and Saumagen - liver sausage, liver dumpling, and sow's stomach. Having ordered some traditional local fare on the back of a couple of the brewery's tasty dark wheat beers, I begin to question the wisdom of my choice.

In the end, it's not bad, although I'm thankful for the accompanying mashed spuds, sauerkraut, and mustard, which both complement and disguise the rest of what I'm eating. With my belly full, I take to the city's medieval streets in search of an Absacker - a nightcap - to help with digestion. It's a damp November evening, and the narrow streets of Heidelberg's Old Town, busy earlier in the day with snap-happy tourists, are almost empty. Up ahead, some shadows slide down a side street, their shoes click-clacking on the cobblestones and I decide to follow. 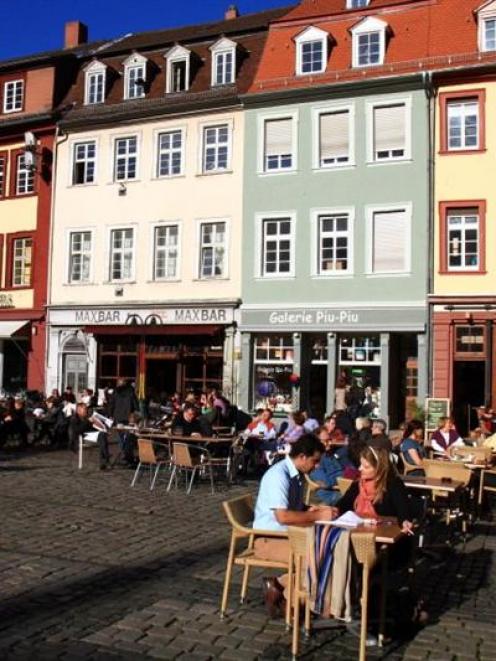 Outside the Max Bar in the shadow of the gothic Heiliggeistkirche on the Old Town's main square.
I'm not sure where I'm being led, but getting your bearings in the Old Town is straightforward enough; Heidelberg Castle stands on a hill above, the River Neckar glides past below, and a main pedestrian zone cuts through the middle. Ahead of me, the shadows materialise into pair of couples beneath a restaurant light.

Having surveyed the menu of pork knuckle and potatoes, the foursome slip in through the restaurant's heavy door into a room full of rough-hewn wooden tables. It's cosy and warm-looking inside, and through the window I see trays of frothy beer glasses being ferried about above the heads of diners.

It's inviting, but not really what I'm after. There are plenty of these type of establishments in Heidelberg, trading on its medieval heritage and catering to the tour groups that flood into the city daily, buy their faux silver tankards, sample old Deutschland, and head off to the next destination on their itineraries. Instead, I'm looking for a bar more popular with Heidelberg's other itinerants, its university students.

Comparable in size to Dunedin in terms of inhabitants and student population, Heidelberg is also home to its country's oldest university, which was established in 1386.

And despite the obvious age difference between the two places - the German city can trace its settlement back to the 8th century - wandering through Heidelberg's Old Town reminds me of walking around Dunedin's north end. Nestled between music stores and second-hand bookshops are cafes full of 20-somethings with backpacks and bars offering two-for-one drinks specials, while little wine bars and art studios bustle with middle-aged couples in linen jackets and colourful spectacles.

After happily ambling a few blocks, I find myself in the Max Bar, which sits in the shadow of the gothic Heiliggeistkirche - Church of the Holy Spirit - on the Old Town's main square. It's smoky and is a bit like a French cafe. Packs of Gauloise cigarettes sit on small, round tables and a woman near the door is wearing a full-length leather jacket and drinking red wine. I order a small shot of a digestif called Aquavit, and grab a table in the window.

The bar's not particularly full, and most of its patrons look like they arrived in Heidelberg as students and never left. It's also not exactly the type of student hangout I had in mind, but still a nice spot to enjoy a quiet schnapps.

The next morning, I get up early, determined to work off the previous night's excesses.

Before I do that, though, I need to get some breakfast. My hotel's on the Old Town's main street, and there are plenty of chain coffee shops and bakeries right outside the door to choose from; I know from my walk the previous evening, however, that the most interesting places lie back down the side streets, towards the river.

Not far along one of them, I come across Cafe Burkhardt, a cafe and wine bar furnished with polished wood and elegant upholstery. Avoiding the temptation of the ridiculously nice looking cakes and tarts displayed in its front counter, I go for a traditional German breakfast of bread rolls with a selection of cheeses, ham, salami, and an egg. Washed down with a cappuccino, it primes me for the rest of my morning's exertions.

The first of these is a less than strenuous stroll to the Neckar and Heidelberg's famous Karl-Theodor bridge. Adorned at one end by the city's old, twin-domed gate, it stretches from the Old Town across to a row of grand riverside villas set against a backdrop of tree-covered hills. It's one of the best photo spots in Heidelberg and by mid-morning is busy with amateur photographers bunching loved ones together and Japanese schoolgirls flashing peace signs.

I take a few photos of my own and watch long cargo barges chug past beneath the bridge before heading off towards Heidelberg Castle. A funicular train runs up to it from the Old Town, but I climb the three-hundred-and-something steps (the last number of the sign's been rubbed out) instead.

At the top, there are manicured lawns and a collection of stunning buildings from different periods dating back to the 14th century. Many are in ruins, and in some places only their basic structure remains, yet this, combined with the autumn colours of the surrounding hills, only adds to the castle's beauty.

The weather's cleared up since the previous evening and I find a good outlook to take some more snaps. Looking through the camera over the gabled roofs and church steeples of the Old Town, I can see apartment buildings and office blocks, and factories in the distance.

They are a reminder of the city's modernity, and of life beyond its tourist attractions. Like many of my fellow tourists, however, I came up here to admire another view and all it takes is a slight change in focus to block them out and get a picture of what life here was like in a different time.