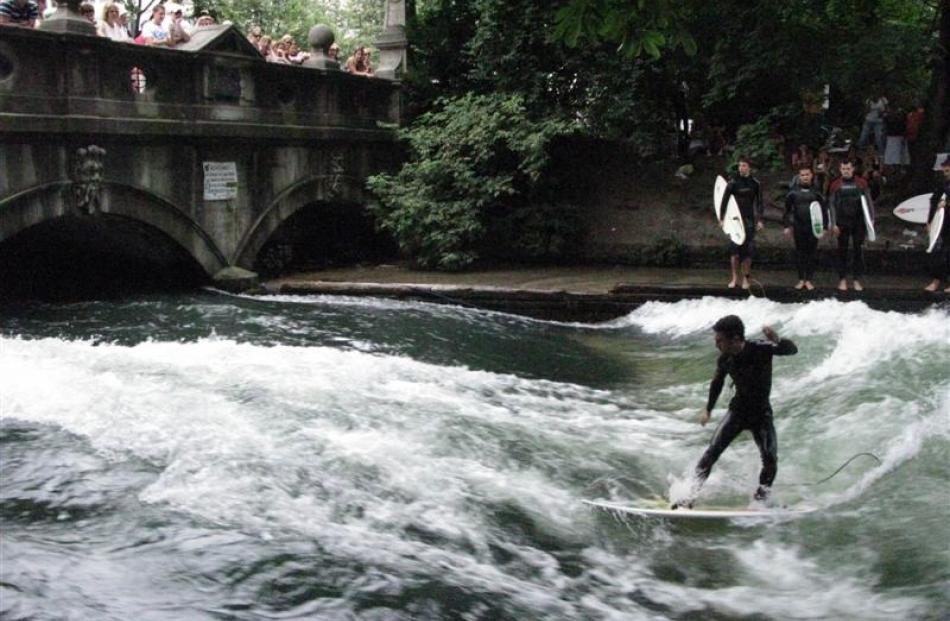 Surfers test their skills on Eisbach (Ice Creek) as it emerges from beneath Himmelreich bridge. Photo by Jeff Kavanagh. 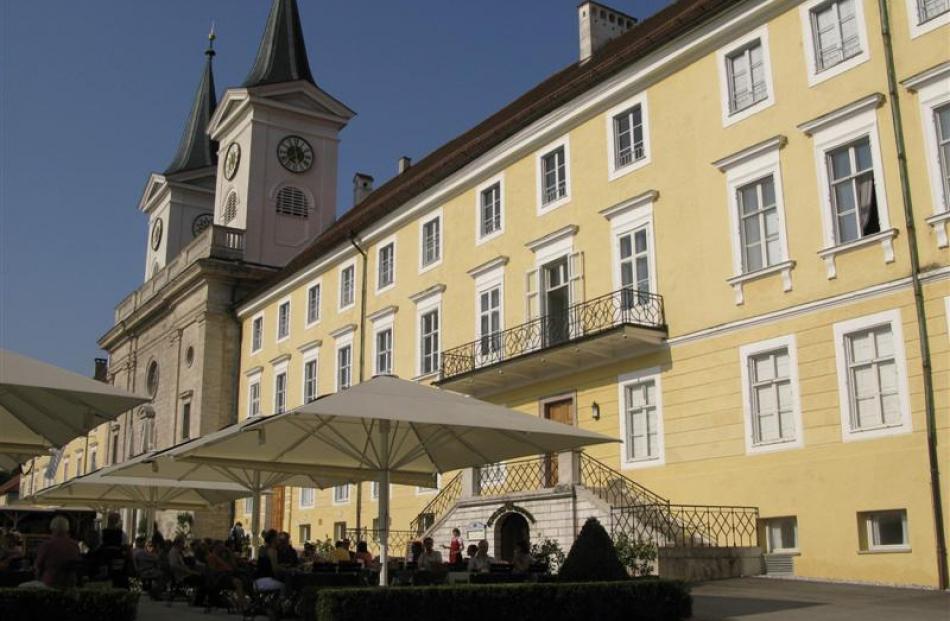 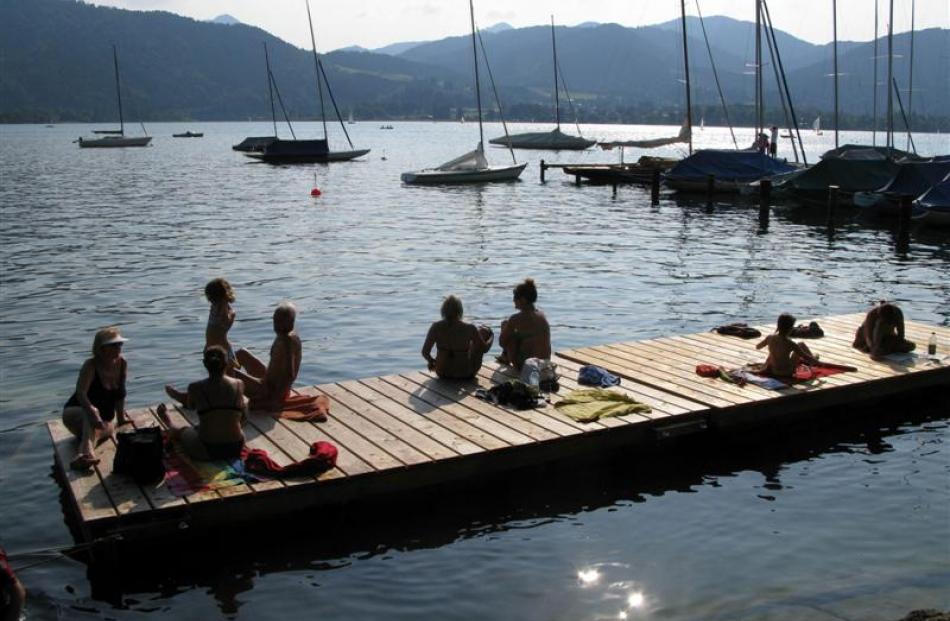 The water in Tegernsee lake is crisp and refreshing. Photo by Jeff Kavanagh.

Munich and beer are practically synonymous, but Munich and surfing?

If the capital of Bavaria was to be represented by a simple mathematic formula, then it might read something like this: lederhosen plus sausages plus beer equals Munich.

And for a fair number of the Kiwi backpackers who descend upon the city in autumn each year, plus Oktoberfest minus memory could also be added to this equation.

But while Munich is world-renowned for its amber delights, which can be consumed at any time of the day, including breakfast, there's more to the city and its surrounds than litre steins of lager.

Upon arriving in the city, the best way to get about (when the weather's good) is on two wheels.

Despite being only a short distance from the Alps, Munich, like a lot of other German cities - Berlin and Hamburg included - is actually flat as a Pfannkuchen.

So flat, in fact, that one of its highest points, Olympic Hill, isman-made, having been constructed from the rubble created by the Allied bombing of the city during World War 2.

This lack of hills combined with dedicated cycle paths means that the city is a breeze to ride around, and bikes can be hired for about $NZ20 a day.

A short cycle from the city centre is one of Munich's most famous spots, as well as one of the biggest urban parks in the world, the Englischer Garten.

Larger than New York's Central Park, its leafy, verdant environs are home to some curious phenomena.

For instance, there's the Chinesischer Turm or Chinese Tower, a five-tiered wooden pagoda circled by - unsurprisingly given its location - an enormous beer garden.

The sight of an oompah band parping out Bavarian favourites from one of the upper tiers, as patrons drain their glasses below, therefore seems strangely fitting.

What is a little harder to fathom, however, is the sight of groups of guys pedalling past in wetsuits and with surfboards under their arms, hundreds of kilometres from the nearest coast.

Although not actually officially permitted, river surfing has been part of park life here for almost 40 years.

The large signs warning of danger to life, and the concrete bottom lurking menacingly just below the churning waters of the Eisbach (Ice Creek), do little to deter surfers who ride the constant wave produced by the river as it re-emerges from beneath Himmelreich bridge in the south of the park.

Surfing may flout park regulations, but there's still clear etiquette to be obeyed, and the surfers politely take turns to leap on to the wave, carving back and forward across it, before slipping off or allowing the river to wash them downstream, where they clamber back on to the bank to wait patiently for their next turn.

Further downstream, swimmers float along in the river's innocuous-looking but swift waters as they continue through the park.

Like surfing, swimming also isn't actually allowed, but the rules don't appear to be policed by the park wardens, even though such aquatic activities present perils that can be fatal.

In 2007, three swimmers, including an Australian tourist, drowned while swimming in the Eisbach and in the past 11 years, its dark green waters have claimed a total of eight lives.

A much safer place to go for a dip is just down the road from Himmelreich bridge, in the Isar River.

Flowing from Tyrol in the Austrian Alps across Bavaria and on through Munich, its stony banks are popular with families who set up picnics and barbecues in summer, and cool off in its calmer, less life-threatening waters on hot days.

Along the Isar, bicycle paths follow the river out of the city and into the countryside towards a cluster of stunning lakes, such as Starnbergersee and Ammersee.

An hour south by train from Munich and lying in the foothills of the Alps, Tegernsee is certainly one of the most impressive.

The train offers a relaxing ride as it weaves its way through rolling countryside dotted with the long, sloping roofs of Bavarian farmhouses and pretty little churches.

The trains are designed to accommodate bikes, and for no extra charge to the 20 ($NZ41) return ticket you can take your own with you.

Of course, if you're keen enough, you can cycle all the way there yourself, but the 50km journey is not something best attempted after a big lunch of pork knuckle and sauerkraut.

Framed by the dramatic beauty of the Alps, Tegernsee's lovely township draws plenty of visitors, both day-trippers from Munich and tourists from further afield.

Small enough to walk around, it has some great little sandy bays for swimming within a gentle stroll of the train station.

Down on the lake, sailing boats and small cruise boats criss-cross its blue expanse in summer, and the water, although fresh, is of a more than acceptable temperature to anyone accustomed to bathing in Otago's chilly southern lakes.

As you'd expect of any self-respecting Bavarian town, Tegernsee also has its own brewery, which in turn boasts a generous biergarten frequented by tourists in leather shorts and traditional frilly Bavarian dresses, or dirndls, throughout the warm season.

Crisp and refreshing - a lot like the lake itself - the local pilsner is best enjoyed in another of the town's drinking spots: the small, elegant beer garden at the Hotel Bayern.

A formidable, castle-like dwelling sitting proudly above the township, the hotel's guest rooms will set you back at least $NZ400 a night for a lake view, but ein Mass (a litre stein) of beer from the outdoor bar will only lighten your wallet by $NZ13, and it too comes with a priceless vista of mountain peaks and a sparkling lake.

Good beer and water; it's undoubtedly a winning combination.

And while the two should never be mixed together, an appreciation of the merits of both is clearly something that's been long understood in southern Germany. - Jeff Kavanagh