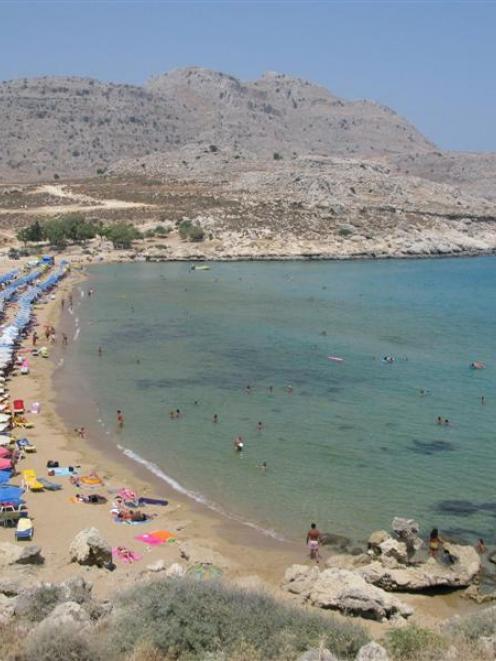 A typical Rhodes beach. Photo by Jeff Kavanagh.
Rhodes has a colossal reputation. Jeff Kavanagh finds out why.

"I feel like a sausage on a barbecue," lamented the middle-aged, lobster-toned Brit tourist from his position on a sun-lounger a few metres from the bath-warm waters of the Aegean Sea.

It was an unsurprising observation, given the grilling he'd been subjecting himself to for the past 40 minutes or so under the midday sun on one of Greece's hottest islands, Rhodes, in the hottest month of the year, August.

The little beach we were sweltering on had no name, other than what was hand-painted on its wooden sign - "Sandy Beach" (together with an arrow pointing away from the road) - and lay a short drive north of the east coast holiday town of Lardos.

Fittingly, the beach was predominantly populated by generously proportioned holidaymakers, most of whom had the good sense to remain within the shade of their beach umbrellas or up in the little café behind the beach, its leafy trees and thatched umbrellas welcome sanctuary from the blazing sun.

With its long, hot summer - Rhodes lies approximately along the same latitude as southern Turkey and northern Syria - and multitude of great beaches on which to enjoy it, the island is a natural magnet for the hundreds of thousands of tourists that visit each year.

Descending upon the largest of the Dodecanese islands by the ferry- and plane-load, they are also drawn to the ancient wonders of the Acropolis of Lindos and the Temple of Apollo, the medieval delights of Rhodes Town, and, for the more sporty among them, the excellent wind-surfing conditions in the south of the island.

It's a winning combination, all this good weather, culture and outdoor activity; and so to - the tourist operators realised long ago - is the triumvirate of reasonably priced (and reasonable quality) food, booze and accommodation.

Rhodes is a place that should normally conjure up visions of the mighty Colossus, a giant bronze statue of the god Helios that may, or may not, have stood astride the entrance to the island's main harbour.

Instead, it's still more commonly associated with colossal boozing and drunken antics, an unwelcome legacy of the hordes of young British package tourists that flocked here - and especially to the seaside resort of Faliraki - towards the beginning of the century.

The package tourists still come in large numbers, and my girlfriend, her father and I can count ourselves among them, having booked a last-minute trip here in search of some late-summer sun.

These days, largely due to the island's tourism board's emphasis on attracting a more international crowd, and a new police station in Faliraki, Rhodes has largely managed to shed its image as a prime destination for Dionysian excesses, while successfully keeping the tourist numbers up.

In achieving this end, however, it seems that almost every attraction on the island, natural or otherwise, has been adapted to cater to the summer-holiday masses.

Decent stretches of sand close to any of the main towns or resorts are inundated with sun-umbrellas and loungers for rent, and sport at least one beach bar or café, the menus of which always seem to feature - besides the obligatory Greek salad - cheeseburgers, chips and hot dogs (if you're unlucky, the bar will also employ an abnormally enthusiastic DJ who'll start pumping out techno at the first sign of the sun going down).

Tsambiki, a beautiful bay with a vast swathe of soft fine sand halfway between Faliraki and Lindos, is such a spot.

Although an area protected from the development of hotels and holiday homes, sun-loungers run three deep along most of its beach, there are beach bars every 100 metres, as well as jet-skis for hire and rides on inflatable banana boats behind speedboats.

Despite (and for many of our fellow tourists, because of) this, it was a nice place to spend a day - the stunning sea and scenery ameliorating the constant drone of the boats and jet-skis.

Unfortunately, just as things started to quieten down, the evening calm slowly enveloping the golden beach was punctured by the oomph, oomph, oomph of the electro beats emanating from the beach bar behind us.

It's understandable that an island reliant on tourism and with a limited season (April until October) tends to exploit its resources, but the overriding impression we got of Rhodes was one of a giant holiday park cashing in on its natural environment and ancient treasures.

Nowhere we visited was this more apparent than Lindos.

A magical cluster of white, sugar-cube houses and narrow, paved alleyways perched above a horseshoe bay of aquamarine waters, it even has its own acropolis.

Consequently, it's also jam-packed with tourists in high season, and they come for the same reason we did: the history, the great views, the amazing Roman captains' houses, the acropolis and the roof-top restaurants.

The pity is that, in the pursuit of the tourist euro, a lot of this amazing stuff has been rendered less impressive by shops selling fake label gear, thousands of beach umbrellas in the bay, cheesy '80s rock bars, the donkey rides up to the acropolis, and a large swarm of TV satellite dishes floating among the diners on the roof terraces.

Of course, it's possible to avoid some of the mass-tourism if you're prepared to spend time journeying away from the island's main attractions, but you'll generally find yourself in a far less spectacular setting than those favoured by the tourist industry.

Our strategy was to visit the popular areas we most liked, at times of the day when there were fewer people about.

As we weren't the earliest of risers, this often meant late-afternoon and early-evening visits - right around the time a cool beer, and some local olives and feta cheese were the best complements to the completion of another scorching day.

We found places such as St Paul's Bay, a fantastic little inlet close to Lindos, with a simple Greek chapel on one side and some great rocks for jumping off on the other, or Stegna Bay, just south of Tsambiki, its shallow, warm waters perfect for swanning around in late into the day.

If we wanted to avoid tourists altogether, there were also plenty of quiet stretches to choose from along the 6km of stony, clear-watered beach near our apartment in Gennadi, a town in the southeast of the island.

Back on the "Sandy Beach", we, like the barbecuing tourist, had decided to abandon our sun-loungers and hotfoot it across the burning sand to the café for lunch.

Sitting down at one of the tables, under a tree with a nice view of the sea, we had a quick glance at the menu: far too hot for cheeseburgers, so Greek salads it was going to have to be.