Herbertville, just south of Cape Turnagain, is exposed to a wild sweep of the Pacific Ocean.
Unable to travel internationally, Diana Noonan discovers small town New Zealand has its own set of charms.

It doesn’t always take a pandemic to dictate a lockdown. Last year, our nation’s borders were suddenly closed to me by unanticipated family commitments. Unable to hunt out the more remote parts of the world I am fond of visiting, I made 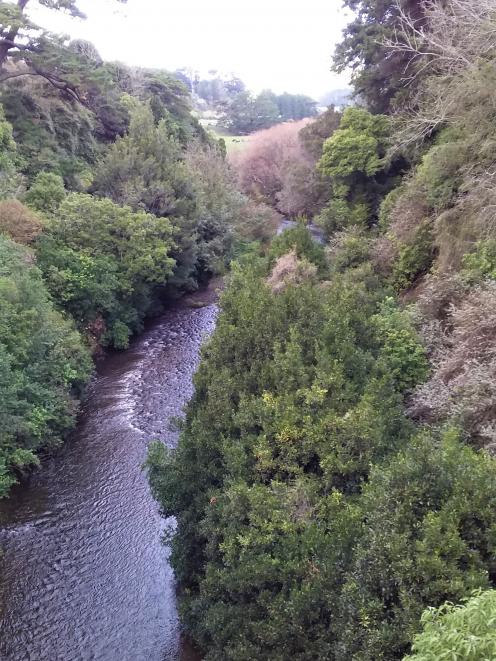 The Makakahi River viewed from Eketahuna's Cliff Walk.
the decision to road trip into some of New Zealand’s less well-known spots — and discovered they can be as quirky as any on the globe!

For the Wairarapa-Hawke’s Bay leg of my journey, I skipped the gentrified small towns of Masterton and Greytown, with their predictable boutique designer shops and antique stores, and ‘‘put in’’ (to borrow a kayaking term) at Eketahuna.

Whether it’s the uninviting sound of its name being poorly pronounced, or the simple fact that it appears to sit rather damply in the middle of nowhere, Eketahuna has been the butt of unkind jokes for years. To be fair, there is a good deal of lichen clinging to its lamp-posts, and its vast roughcast pub does rather act as a magnet for utes laden down with bloodied deer and wild pig carcasses. But for all that, Eketahuna has its own set of charms, and one of these is its country camping ground.

Set in a hollow surrounded by fir trees full of possums, its tiny kitchen is the sort to warm up quickly once its stove is turned to ‘‘high’’, and the oven door propped open. I pitched my tent ($7 a night for an unpowered site) beside some bemused permanent residents, and went to sleep with the sound of the Makakahi River gurgling close by. A gaggle of roosters announced morning, just before dawn, and while the ice melted on the windscreen of my vehicle, I jogged the couple of kilometres back into town along the charming ‘‘Cliff Walk’’.

Opened by the mayoress of Eketahuna in 1911, the pretty trail follows, and then crosses, a gorge of rippling water far below. My short detour into town took me past the impressive wood-buttressed 120-year-old St Cuthbert’s Anglican Church, which was paid for by the son of early missionary Henry Williams. Had it been Sunday, there would have been an opportunity to peer into its interior, and a little later in the day, to have popped into the Eketahuna and Districts Early Settlers Museum, which is housed in a set of immaculately restored historic weatherboard buildings. Instead, I browsed the shelves of several delightfully unsophisticated second-hand shops in the main street, one of which was quietly guarded by a geriatric, white-muzzled wolf in a hooded jacket made for it by its proprietor-owner. 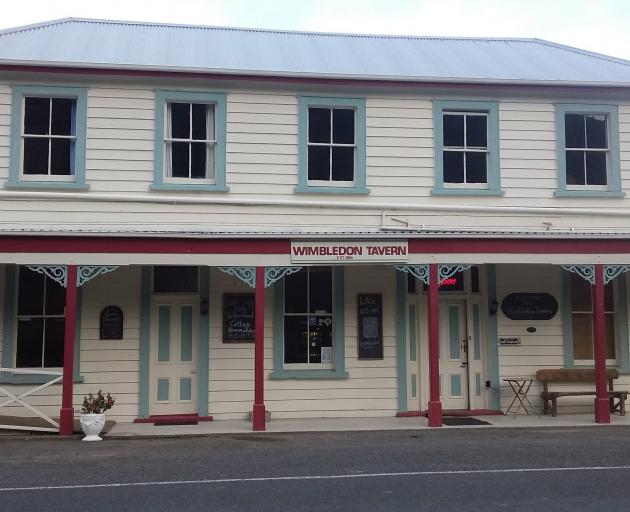 The Wimbledon Tavern, a cavernous, step-back-in-time country pub with two front doors and a circular billiard table.
By this time, it was 10am. The frost had still not lifted, but a gentle drizzle was descending upon the only other person braving the cold main street — a gentleman Jehovah’s Witness who had set up his rack of Watchtowers beneath the awning of the town’s Four Square. Sans rain jacket, I scurried into the warmth of the Addiction Cafe next door, and found, to my great delight, the carrot cake of my youth, swathed in thick cream-cheese frosting, and dotted with chopped dried apricot and pumpkin seeds. The coffee was unexpectedly satisfying, and the family owners welcoming.

Sustained, I returned to the camp to pack up my sodden tent, which by this time was surrounded by a family of ducks pecking at its guy ropes, and backtracked a few kilometres south to visit the Pukaha National Wildlife Centre at Mt Bruce. The centre can be busy with tourists in summer, but a winter stop-off finds its inmates calm, and Manukura, the world’s only white kiwi in captivity, happily burrowing for grubs in her semi-lit enclosure. I would have lingered longer at Pukaha, especially after being wolf-whistled by its cheeky kokako Kahurangi, but the promise of a storm pushed me north and on to Pahiatua.

To be honest, there is not a lot to linger over in this modestly sized rural service town, especially on a damp day, yet to pass through without stopping is to miss an understated attraction. ‘‘The perching puss of Pahiatua’’ can be viewed at ‘‘Tradesmart Secondhand and Collectibles’’ on the main street, a fascinating shop boasting an eclectic array of almost everything you can imagine — and one of the most unusual cats you are likely to come across this side of the black stump.

Iddy-biddy was adopted by Tradesmart’s owner, Tina, who happened upon the stray tabby in a back street one Christmas. Ever since, without any training whatsoever, the cat has preferred to spend most of her time standing on her haunches. This is especially so when approached by customers who, Tina says, often ignore the shop shelves in favour of engaging with the resident feline. Iddy-biddy has since given birth to kittens, who appear to be developing her talent for living upright. Do not pass through Pahiatua without meeting her!

My ultimate destination of the day was Herbertville on the East Coast. For those who can read a map correctly, or follow without question the instructions of their GPS, this is a journey from Pahiatua, on good roads, of no more than 90 minutes. For the geographically challenged who find themselves accidentally crossing the Puketoi Range on the notorious Goat Track in sleet and gale-force winds, allow three hours — and carry sedatives. This is not a route to be undertaken in a low-to-the-ground Toyota station wagon. If you are not travelling in a four-wheel-drive (in fact, even if you are), it is best avoided. It was with enormous relief, therefore, that when I at last emerged on to sealed road, the Wimbledon Tavern reared up at me out of the gloom.

A cavernous, step-back-in-time country pub with two front doors and a circular billiard table, the tavern was built in the early 1880s to serve travellers and tree-fellers, the latter occasionally emerging from the forest with hefty cheques after months of arduous chopping. The story goes that the settlement was named after a local man who shot a bullock from a significant distance, a feat considered by those watching to be characteristic of English Wimbledon’s competitive rifle shooters. On the evening I staggered in, a fire was roaring, and the soothing cider was icy cold.

From the Wimbledon Tavern, the tiny coastal settlement of Herbertville is a drive of only 10km. Mindful of my wet tent in the back seat, I checked into a vintage cabin sheltered from the ferocious sea winds by a tall macrocarpa hedge. Its camping ground owners had fortunately chosen not to tart up the accommodation, and my wire-wove bed and shiny enamel-painted walls were happy reminders of childhood holidays. When, later, I went to the kitchen to cook dinner, it was to find shelves filled with communal dishes and pots and pans, and two vast freezers labelled ‘‘fish bait only’’.

Herbertville sits, completely exposed to a wild sweep of Pacific Ocean, just south of Cape Turnagain (the cape can be reached on foot from the hamlet in an easy 45-minute walk). Residents number in the region of 20, but the population swells in summer when the owner-occupiers of the iconic camping ground’s intriguing array of colourful caravans, buses and shanties turn up with fishing rods and small boats. The pub across the road does lunch and evening meals, and is your best bet if you’re wanting an upgrade in accommodation.

In the morning, I took a long walk through the village, passing the cutest of cottages and the nine-hole Cape Turnagain Golf Club, where one of the biggest challenges must surely be hitting a ball against the wind! A gravel no-exit road leads south out of Herbertville, hugs the driftwood-laden beach and passes various memorials to the region’s early settlers. These hardy folk were serviced by schooners which were beached on the shallow sands while passengers and cargo were unloaded, and were then refloated on the next high tide.

The road continues on past the grand old lady homestead and historic woolshed of Burnview Station, and from there, on to Pipibank Station. It is from the owners of Pipibank that you can inquire about opportunities to free-camp beside the sea, if the farming calendar allows.

From Herbertville, I turned my Toyota north, and half an hour later, passed by the site of the longest place name in the country, Taumata whakatangi hangakoauau o tamatea turi pukakapiki maunga horo nuku pokai whenua kitanatahu. A wide layby (created for the benefit of tour buses) makes stopping for the mandatory photo opportunity a breeze, but I was more interested in pressing on to Porangahau, where I had heard rumours that a more-than-passable espresso could be obtained from a side-of-the-road remodelled horse float.

The very groovy Flotsam and Jetsam Cafe is presided over by its prepossessing barrista-owner Orlando McDonald, who doubles as the town of 200’s celebrant. When I called in, half the children in the neighbourhood were playing footy on his front lawn, and a steady stream of chatty locals were calling for their lunchtime coffee. Porangahau boasts a picture-postcard 1880s restored-timber church, The Duke of Edinburgh Hotel (of similar vintage) and one of the most handsome marae in the country. If the day is warm, you might want to drive the short distance to the long, golden-sand Porangahau Beach, which backs the settlement, but the friendliness of the town is such that I recommend you tarry a while with your coffee and enjoy the conversation that is sure to come your way. After just a few minutes chatting, I found myself accepting an invitation to visit Rongomaraera marae and its adjacent mara kai (food garden), and before I knew it, three hours had passed without my even being aware of it.

All of which made Waipukurau, and the end point of this section of my road trip, a little ho hum. Fortunately, I was only at the beginning of a series of winter jaunts that would lead me into parts of my own country I didn’t even know existed!