The fishing fleet in Greymouth. PHOTOS: SUPPLIED
Lindy Davis spins her wheels on a cycle journey down the West Coast Wilderness trail.

There's a particular wildness you’re unlikely to encounter away from the West coast of New Zealand and much of it stems from its rich and colourful history.

To fully appreciate the pioneering spirit in these parts, you need time to discover the land and the families who profoundly define it.

One of the best ways to navigate new ground is quite simply on a bike.

On this occasion the warnings had come in thick and fast. This was the West Coast and one should be prepared for every eventuality.

But the day I arrive in Hokitika ready to cycle the 132km West Coast Wilderness Trail, a vivid blue sky and warm temperatures made this part of the country anything but inhospitable. 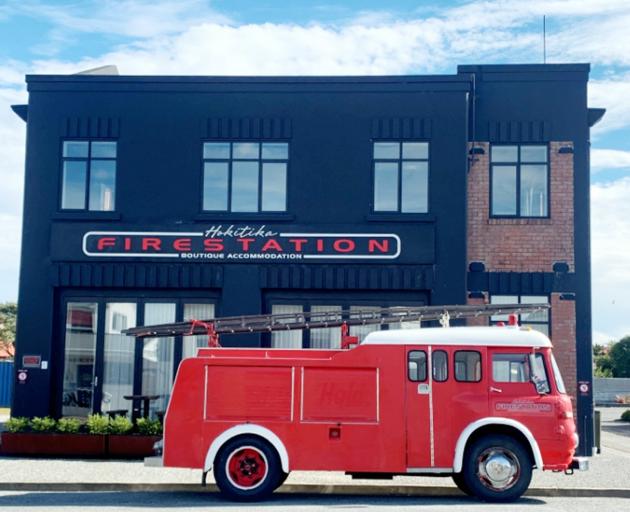 Hokitika Fire Station, now a boutique accommodation provider.
An iconic "Hokitika" driftwood sign burrowed in large boulders on the beach provides the perfect frame to view the Tasman Sea and Mt Cook in the distance.

The city is a celebration of history, starting with the old clocktower on Sewell St, the colourfully restored Hokitika Fire Station, the old Bank building and a variety of character cottages from the early 19th century.

Back then, the centre of town was a busy hub with dozens of hotels, bars and retail stores. Few of the original buildings remain, but one of the city’s oldest buildings, the Bank of New South Wales in Revell St, has been lovingly restored by owner and artist Ian Phillips.

Inside the art gallery and workshop, there are sculptures of fish, insects and native birds, skilfully crafted from copper and wood.

Old black and white photographs illustrate Hokitika as a shanty town with makeshift huts and shacks crafted from remnant sections of iron and timber from ships that had run aground on its notorious river bar.

After the discovery of gold, it became one of the busiest ports in New Zealand. 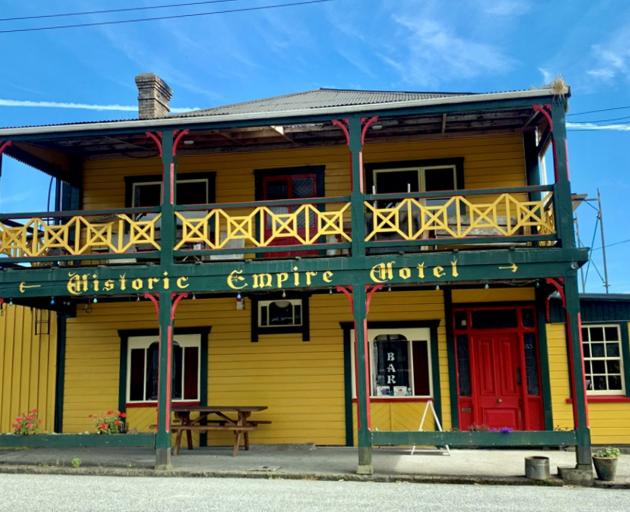 The historic Empire Hotel in Ross.
A quick walk around town reveals more outlets to buy greenstone (pounamu) than to buy lunch. The large number of galleries and artisan studios reflects a creative and diverse community, clearly inspired by the natural landscape.

Sunset point and the deck of the Beachfront Hotel are arguably a couple of the best places to watch the pink and orange hues at day’s end.

Following an early morning briefing at Cycle Journeys depot, we take a shuttle to Ross. The historic gold mining town has several heritage buildings still intact, including the Ross Goldfield and Information Centre, with an extensive collection of photographs and records on West Coast mining history.

Gold was first discovered here in 1864 and the only access back to Hokitika was either on foot via the beach or by horse. The road was completed 10 years later and the first West Coast railway from Brunner to Greymouth rolled out in 1876. 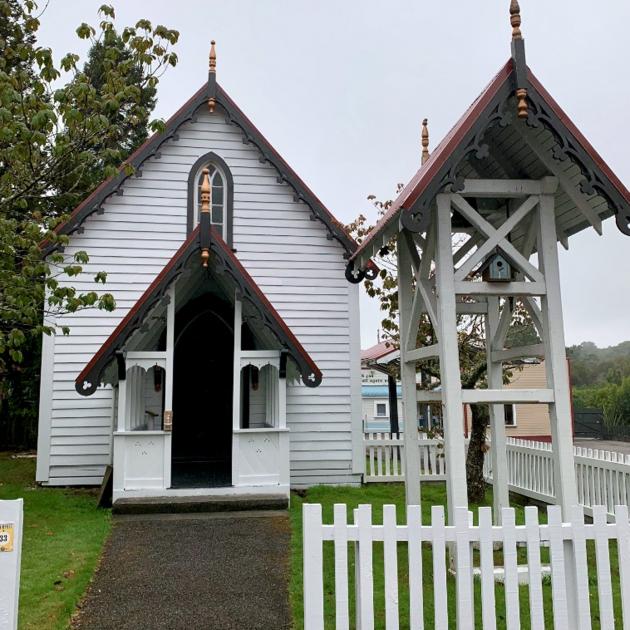 St Patrick's Church, Shantytown.
I take a short detour up the hill to the old cemetery on the ridge with beautiful views. It’s the final resting place for the pioneering families who settled here. There’s an optional loop around Jones Flat gold mine, definitely worth the trip if you don’t mind navigating a bit of wild bramble.

The first section of this 33km stretch is flat and follows the historic Ross to Hokitika railway line past large sections of scrub and wild blackberry bushes. We stop and I feverishly consume the equivalent of a large punnet of blackberries.

A sawmill operated in this area more than 100 years ago and countless logs covered in moss alongside the trail serve as a stark reminder of the intense milling.

Crossing the Totara river via the five-truss Totara Bridge, the trail meanders through a canopy of native rimu, kahikatea, totara and miro, towards the wetlands of the Totara lagoon, a popular area to catch whitebait and flounder.

Following the signs for the West Coast Treetop Walkway, we stop for lunch and watch a couple of wekas strutting around the tables like over-attentive wait staff. 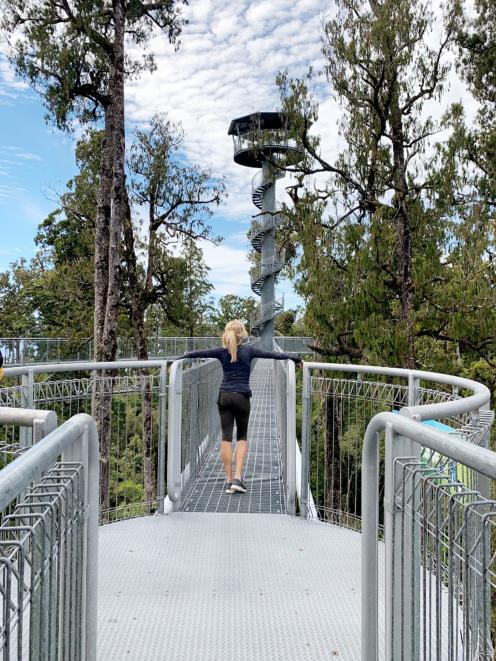 The West Coast treetop walkway.
After a short uphill walk, we step on to a platform 20m above the forest floor amid a canopy of giant rimu and kamahi. It’s almost possible to reach out and touch the upper branches. The 450m-long steel infrastructure offers unparalleled views of Lake Mahinapua and the Southern Alps. And if that wasn’t enough, there’s a stairwell to the top of the tower, some 47m above the forest floor, that will take your breath away.

Back on the bike, we cycle through native forest along the Mahinapua Tramline and through the wetlands. The elevated section of boardwalk makes it easy to spot birdlife.

A short stint on the main highway takes us past the historic port of Hokitika, once bustling with trade but now home to white herons and seabirds.

We pass a group of cyclists, many of whom are in their 70s and on e-bikes. Their happy disposition reveals this section of the trail clearly appeals to all ages and will suit most amateur cyclists.

We were given a hint that the 36km ride the next day would be more challenging, with hills and a few gnarly forest trails.

The shuttle dropped us to Cowboy Paradise in Milltown Valley. It was exactly as described, with an outdoor shooting range, dining hall wallpapered in Trump posters and a large pole centre-stage for any robust women inclined to coil around it. The holstered hip-swaying cowboys were clearly AWOL.

The Theatre Royal Hotel in Kumara.
The real thrill began when we hit the trail, with saddleback twists and turns that ensured we cycled at low speed.

This section has been landscaped with large river boulders and native ferns and at the base of the hill, cattle graze contentedly alongside the river.

The next 5km is tiresome unless you’re a big fan of gravel and gorse. We cycle along the Water Race trail, stopping for a short walk and lunch at Lake Kaniere, a beautiful spot with the clearest water I’ve seen in a long time.

A cyclist is standing on the shoreline gingerly peeling off his Lycra.

After a quick plunge he ventures out looking revitalised. The grimy russet tinge on his skin from the muddy trails is gone.

The next 5km is largely flat with ample shelter from the lush canopy of native trees. We pass the backside of the lake and the outskirts of Hokitika, home of Nolan Brothers cannery, the largest New Zealand whitebait canning factory operating from 1928 to 1952.

After drinks on the deck we sort food for the following day as there are no shops on the 34km trail between Milltown and Kumara. 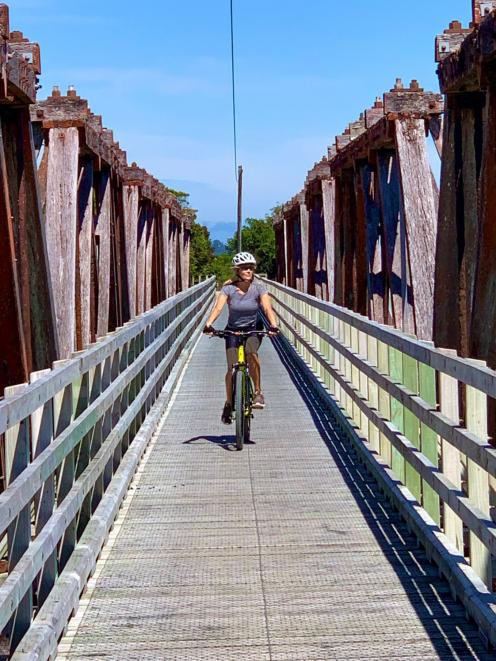 The Totara River truss bridge.
Heavy rain buckets down early in the morning and after a 30-minute shuttle ride, we gingerly cycle down the slope with a series of switchbacks and tight turns. This is definitely not the day to slip sideways into the mud.

A short cycle through the bush and over McPherson Creek suspension bridge we then face a 2km grind uphill.

The larger stones on the trail are by now wet and slippery, causing the bike tyres to skid and occasionally spin. I consider abandoning the bike altogether and hiding behind a tree, ready to ambush one of the cyclists on e-bikes behind us.

A group of 60-somethings cruise past seemingly oblivious to the sheet rain. I’d do just about anything for an e-bike at this point.

We cycle across a bridge over Reservoir Creek and thankfully there’s a decent stretch of downhill through Kawhaka Pass.

The rain finally stops just long enough for me to perch on a log and devour soggy quinoa and pumpkin frittata.

After some degree of persuasion we continue through sub-alpine forest with native trees, thousands of ponga and dense layers of fern dotted with tiny fragrant alpine orchids.

The rain having finally subsided, has brought a sense of calm to the forest, making it feel very surreal.

In the distance I catch sight of a swathe of wet tissues suspended in mid-air. On closer inspection I see the "tissues" are in fact clumps of gorse cocooned in spider webs.

Trappers Rest.
We cross a bridge to discover a small campsite known as Trappers Rest, where cyclists are queuing for a hot brew of tea. But by now I’m dreaming of a hot shower and something more compelling than tea.

After several kilometres we cycle alongside the site of the Kumara Goldfields and through the main street of Kumara, once a lively town of 5000 people during the peak of the gold rush, now comparatively quiet.

If time and weather permits, factor in a side trip to see the water race and a walk to Londonderry Rock.

We cycle to Burridges cottage, just one of a few remaining properties built last century and now owned by the Theatre Royal Hotel.

A quick tour of the various rooms adorned with memorabilia offers some context to the life of the theatre patrons and the dancing girls employed to keep the miners happy and on task.

The rain has livened up again so we chill out in the lounge bar with a well-deserved whisky and dinner in the hotel restaurant. 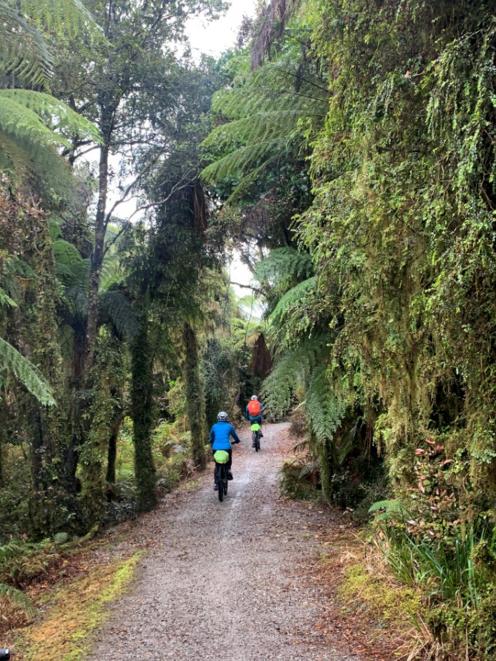 Cycling through native forest at Turiwhate.
The following morning signals the final leg of the trail and just 28km to Greymouth.

We follow the Greymouth-Kumara tramway through native bush, crossing the 70m-long suspension bridge over a vast chasm with impressive views across the Taramakau River.

Intrigued by the sign at the township of Paroa that indicates Shantytown Heritage Park, we take an unscheduled detour to visit the replica village built in 1971.

Inspired by a visit to Knotts Berry Farm in the US, the developer created the space to include Chinatown, two fully restored steam trains, a sawmill and a museum with a vast collection that would enthral anyone interested in New Zealand history.

Marketing manager Laugharne Kemp says several of the buildings, including the Ross Coronation Hall — purchased for $1 in the late ’60s — and St Patricks Church, dating back to 1866, are original.

We cycle the last 10km on the main road, skirting past the Erua Moana Lagoon (Blaketown) and Coal River Heritage Park.

The last stretch runs along the floodwall before finally reaching the finish line opposite the Greymouth Railway Station.

The itinerary calls for an obligatory stop at Monteith’s Brewery.

Unsurprisingly, I need little persuasion and park my bottom on a comfortable seat to toast the West Coast, definitely worth its weight in gold.