The view from the top of the Rock and Pillar Range, near Big Hut. PHOTOS: TOM MCKINLAY
There is a lot to see on a walk up to Big Hut, writes Tom McKinlay. Some of it is only inside your head.

The late Japanese palaeontologist Chonosuke Okamura claimed to have discovered more than a thousand fossilised mini-species, exactly the same as ones romping around the planet today, except that some measured a few millimetres in length, others less than a millimetre.

As a result he surmised that "There have been no changes in the bodies of mankind since the Silurian period ... except for a growth in stature from 3.5mm to 1700mm".

That's the Silurian period that ended 416million years ago. Conventional science estimates that it witnessed plants colonising land for the first time. 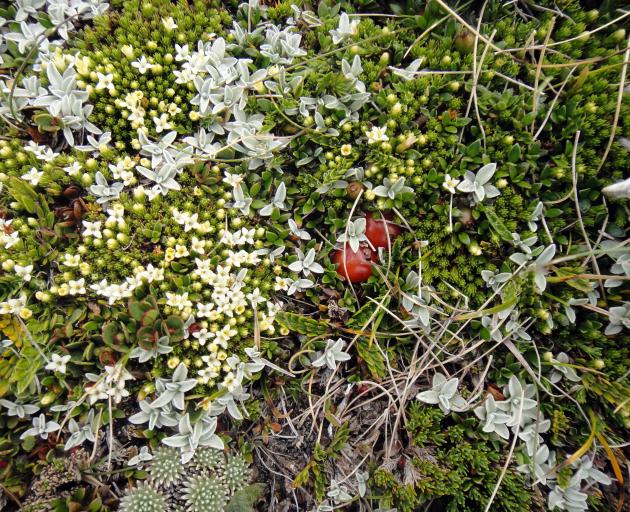 The low alpine plants are rather lovely.
But by focusing his microscope on slabs of polished limestone, Okamura spotted all sorts of shapes that supported his theory of ancient mini-creatures, including hairdressers.

Others have suggested Okamura's work is an example of pareidolia, the phenomena in which people see patterns where none exist: such as corn flakes in the shape of religious figures.

Were Chonosuke Okamura to ever climb the Rock and Pillar Range above Middlemarch, he might have to revise his theory up, confronted as he would be by an enormous fossilised chicken just to the west of Big Hut, the table-tennis enabled tramping hut on the range. It's on a Stonehenge scale. The alternative explanation of a prehistoric chicken cult is attractive. There may well be a time of year when the last rays of the sun fall precisely on some part of its unyielding plumage.

It seems, I too am prey to bouts of pareidolia. 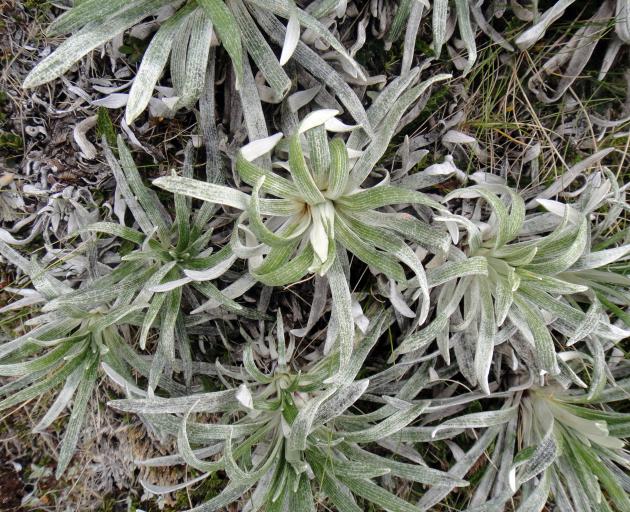 In his book The Patterning Instinct, A Cultural History of Humanity's Search for Meaning, Jeremy Lent explains that little children "intuitively believe everything exists for a purpose, a viewpoint known as teleology, which is inextricably intertwined with religious thought".

Apparently, when a group of 7 and 8-year-old children were asked in a study why prehistoric rocks were pointy, they rejected geological-type explanations in favour of the likes of "so that animals could scratch on them when they get itchy".

Even more often than chickens, we conjure faces.

There is a rock with a face on it about two-thirds of the way up to Big Hut. It stares out, inscrutable, over the Maniototo Plain: rocks being essentially inscrutable.

Anthropomorphism is a result of an attempt to see "what is important to see: what may affect us for better or worse", Lent records.

In evolutionary terms, the face you fail to spot could belong to someone about to do you ill.

Lent goes on to talk about how we all need to redirect our efforts at finding meaning away from chicken-shaped rocks and towards finding a "connectedness within ourselves, to other humans, and to the entire natural world". 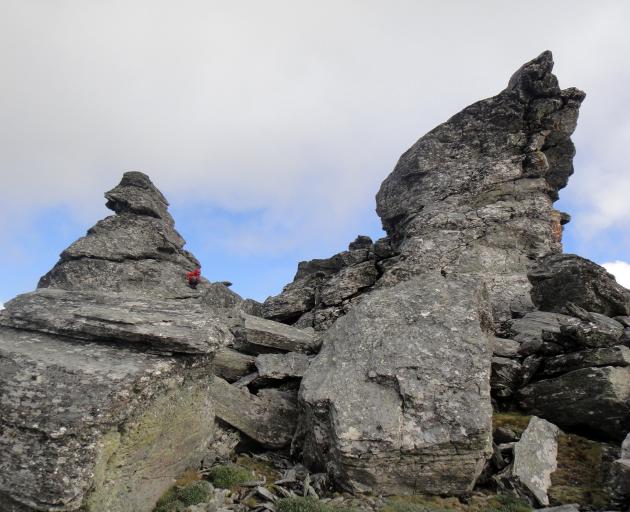 Yes, it looks like a chicken to me, too.
Other parts of the walk up to Big Hut on the Rock and Pillar Range are good, too. Beginning with the bits where you stop walking and lie in the long grass for a bit. Perhaps even pulling out a book for a few pages, as if there were no timetable to keep.

There's also the bit where the vegetation changes, becoming lower and more alpine, and the track levels off ever so slightly as it begins to describe a gentler curve towards the summit. It seems as though you might be nearly there. This, at first, is a lie. You are still quite a way from the top. But on a climb such as this hope is as good as a chocolate bar.

At about this point, one of my sons said: "I hope we never get to the top, this is so beautiful".

The low-living alpine cover is indeed beautiful. Tiny perfect shapes crafted by a whimsical hand. This is somewhere you should not even leave footprints.

Big Hut itself is weatherproof. There's a nearby pond full of water as pure as intention, and probably more so.

Inside there's table tennis. There were three in our party and we were all briefly king of the table.

In the kitchen, there was a sign saying not to leave gas cookers inside. Presumably for fear gas would leak from canisters with dire consequences.

We ignored the warning and went to bed.

During the night, someone else arrived at the hut, propped every door open and left again, unseen and unthanked.

The next morning, still alive, we scrambled up to the big chicken, took photos, then wandered back down the hill, reciting the changing vegetation we'd seen on the way up, but backwards.

As is often the case, going down actually wasn't much easier.

We had brunch in Middlemarch where I alone drank coffee.

By the time we reached Outram in the car, I think I was the only one still awake.