Where life really is a beach 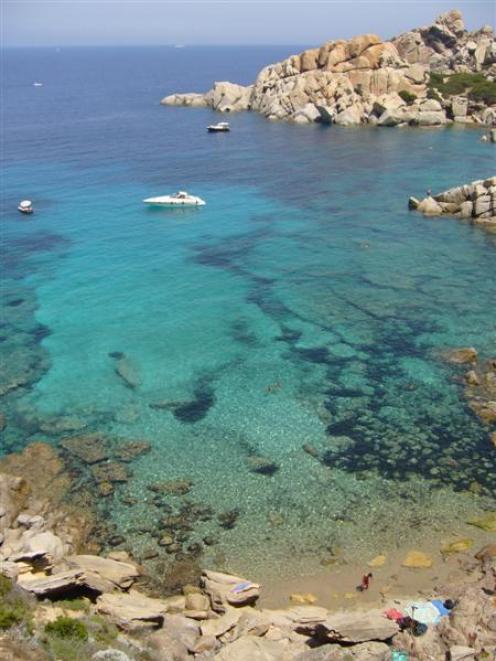 A bit of a climb down, but Cala Spinosa's rewards are clear to see. Photo by Jeff Kavanagh.
Jeff Kavanagh heads for Sardinia where he finds sun, sea and great Italian food.

If the attire of your fellow passengers tells you anything about your destination, then one thing about our destination - Sardinia - becomes abundantly clear to me and my girlfriend as we check in at Hanover airport - it's going to be hot.

Despite a briskly cool, early morning departure, practically everyone on our flight - from the young couple in Ralph Loren polo shirts at the front of the queue to the curly mulleted, middle-aged bloke in his sleeveless T-shirt at the back - is dressed like they are headed straight to the beach.

Which we certainly are.

It hadn't taken long to decide on Sardinia, the Mediterranean's second largest island, and specifically the Costa Smeralda and the northeast, as the location for a fortnight of lying on beaches, swimming, eating, and generally taking it easy.

First, there was the name.

Any place, outside of a theme park, called the Emerald Coast surely had to be good, and photos on the Internet of golden sands and sparkling ocean confirmed the natural beauty the name evoked.

Then there was the fact that, on average, the island only receives 1ml of rainfall in July, so we were highly unlikely to be stuck inside playing Monopoly while it bucketed down outside.

Not only was it hot and dry in summer, it was cheap, unlike its French cousin - Corsica - to the north.

A package including a one-bedroom apartment in the tourist harbour town of Cannigione for two weeks, plus rental car and flights, was going set us back a little less than 1000 (NZ$2080) per person, similar to what we would have had to shell out for accommodation alone on Corsica.

And finally - and we were already aware of this - an Italian island means Italian food which in turn equals personal happiness.

A simple, laid-back little town, Cannigione lies on the western shore of the Gulf of Arzachena, its main street flanked by a decent collection of supermarkets, green grocers, newsagents, pharmacies and stores packed to the gunwales with brightly-coloured beach paraphernalia.

It's a resort popular with young families, so there's not a great deal of nightlife beyond dining out, a drink or two at one of its low-key bars, or a visit to the lively night market along the waterfront.

Our apartment, while comfortable and cool, is no great shakes, and a massive concrete boatshed impairs our balcony's vista of the hills across the gulf.

Fortunately, some ridiculously good seafood risotto at a fish restaurant five minutes walk down the harbour-front tempers any disappointment we might have with our digs.

Typically for Italy, some of the best eating can be found in fairly innocuous-looking establishments, and the Tavola Azzurra with its fish-shop-plus-tables simplicity, conforms perfectly to the stereotype.

Many of our evenings would be spent here, eating risotto and fried calamari from plastic plates in a lane busy with tourists, both Italian and otherwise, with many standing patiently against the wall opposite the restaurant, waiting to be seated.

About a tenth of the size of New Zealand, Sardinia is a sizeable island, and for the two weeks we're here we don't venture far out of the northeast.

Apart from one hot, dusty trip inland to the town of Tempio to visit some natural springs favoured by the Romans and to generally get lost, we remain on the coast; beaches are what we are here for, after all.

Our regular lazy-day spot is a quiet, anonymous little bay 15 minutes drive north of Cannigione, and sufficiently far from the road to be undisturbed by traffic noise or large numbers of tourists from hotels in the vicinity.

Journeying further afield, we rely on one of our first purchases in Cannigione - an illustrated map of the island's spiagge, or beaches - to inform us of our destinations.

Seven euros well spent, it soon becomes our main guide as we embark on day trips to places such as Spiaggia La Cinta, a huge curving arc jammed from the sea to the dunes with holidaymakers; Cala Spinosa on the northern tip of the island; and the beautiful archipelago of La Maddalena.

Cala Spinosa we visit many times: the view of its massive, otherworldly granite rocks and pristine water so crystal blue that it appears to have been digitally enhanced is worth the hour or more car journey alone.

The snorkelling and golden sunsets justify the effort yet again.

We also make a couple of trips over to La Maddalena, off the northern end of the Emerald Coast.

The first is made on the car ferry from Palau, a short, inexpensive journey to the eponymous main island and its sister Caprera.

One of several nature reserves around Sardinia, the archipelago is generally less affected than others by human contact, evident in the wild deer bounding through the trees in Caprera, but still we encounter some tourist-curious boars in the same forest.

The second trip is taken, possibly ill-advisedly, on a large tourist boat.

Thirty euros for a four-hour trip, including "lunch", a plate of plain pasta with olive oil and Parmesan cheese, leaves us wishing we had forked out the extra money to rent our own small speedboat for the day.

On one of our last nights on Sardinia, at the insistence of my girlfriend who is fascinated by TV's Lifestyles of the Rich and Famous, we decide to peruse the flamboyant displays of gargantuan wealth on show at Porto Cervo.

One of the most expensive harbours in Europe, Porto Cervo was developed, along with the rest of the Costa Smeralda, by the Aga Khan in the 1960s, and remains a magnet for those wanting to see and be seen.

The superyachts that line its waterfront do the term "super" a disservice.

Five-storey floating leviathans with chopper pads (and choppers), they form a backdrop to tourists' snaps of themselves, while on the rear decks passengers dine and on the gangway uniformed crew take Gucci and Versace shopping bags from porters.

All of this glitz and high life is a bit rich for our blood, and we're more than happy to retire to the simple delights of Cannigione and the priceless pleasures of days spent exploring northeastern Sardinia's glorious beaches.