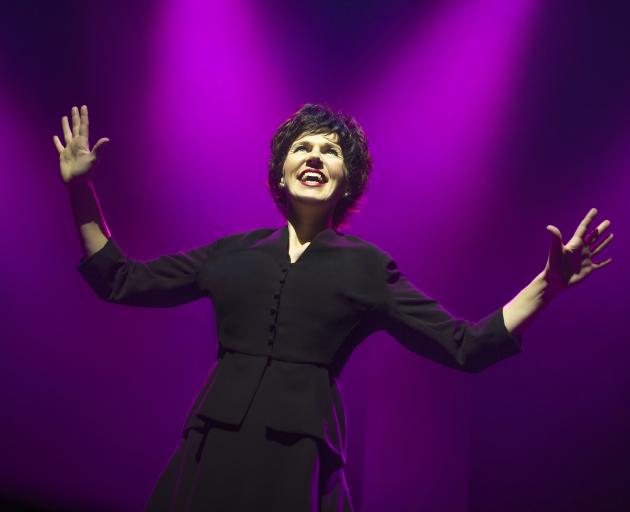 Q How would you describe Songs for Nobodies?

It's a bit of a strange title, isn't it? Songs for Nobodies is a series of imaginary encounters between five ordinary women, the "nobodies", and five "somebodies", the singers Judy Garland, Patsy Cline, Edith Piaf, Billie Holiday and Maria Callas.

Q How did this show come to be written?

Songs for Nobodies was originally written for Bernadette Robinson, who is well known in Australia as an impersonator of female singers. Bernadette asked Joanna Murray-Smith to write a one-person show for her. She was quite persistent, so finally Joanna wrote one monologue for Bernadette to learn and perform, thinking that would be the end of it. This monologue is the first one in the show, for the character Bea Appleton, a ladies' powder room attendant in a New York restaurant. She's the person who holds towels or stitches up a hem for the female diners. Bea's fleeting encounter is with Judy Garland. Bernadette gave such a stunning performance that Joanna then wrote the whole show for her.

Q How do you sing in five completely different styles?

I have to prepare in a different way to Bernadette. Whereas she is primarily a singer who acts, I am an actor who sings. My director, Ross Gumbley, said I should take the pressure off myself by not trying to impersonate. Rather, I use my acting skills to find the essence of each character. So I did a huge amount of research about each of the five famous women, watching them and listening to them. Then I just try to wear my heart on my sleeve in the performance to convey the essence of who they are. With Judy Garland, it's her drug-fuelled performances that kept the audience on the edge of their seats. Edith Piaf was "take me as I am, warts and all"; Patsy Cline was staunch and strong despite being beaten by her husband. Billie Holiday's life was tragic from childhood. She was raped as a 10-year-old, experienced violence as well as the harsh conditions of segregation in the US and was completely fried on drugs as an adult. And Maria Callas had her heart broken by Aristotle Onassis, who dumped her for Jackie Kennedy.

Q Which of the roles is the greatest challenge for your voice?

Definitely Maria Callas. She's a true soprano. I had to go back to singing lessons to get fit for singing opera. In Songs for Nobodies, I sing as Maria Callas right after three songs as Billie Holiday, who has that distinctive sleepy vocal fry in her voice. Singing as Billie Holiday is exhausting for the voice as the vocal chords are rubbing together. Going from Holiday to Callas is like being a sprinter, then having to run long distance. Patsy Cline's glottal yodel in the voice is fun and I just love spitting out the French for Piaf. The most comfortable is Judy Garland - I do a medley of her songs in another of my shows, Legendary Divas.

Q How important is the tragedy of these stories in this show?

It may be just a coincidence that the five women all had short tragic lives. The magic of this show is that it contrasts so beautifully the pain in the lives of the "somebodies" and the relative contentment of the "nobodies". People who have seen the show often remark to me that they find the show thought-provoking and poignant because of that. It allows people to reflect on the meaning of happiness. Sometimes we don't appreciate what we have until it's gone.

Q Who has been that important "somebody" in your life?

There is a fabulous woman in New York called Lina Koutrakos who was a wonderful turning point a while back. I did some masterclasses with her and she really helped me find the truth and heart in my performance, rather than singing in a "trained" way. That ability is so important with a show like Songs for Nobodies. New York feeds me as an artist - I'll be performing Songs for Nobodies in New York right after coming to the festival in Dunedin so it's going to be wonderful once again to see "my inspiring" Lina.

Q How important is having solo shows in your career?

I find one-person shows very satisfying and, of course, it's so much easier to tour with just me and an operator or a small band. I do love the big ensemble pieces as well. I played the lead role of Donna in Mamma Mia in Dunedin in 2014, which was great fun. I'd love to tour a big show like Blood Brothers, but that's scary for a small production company like mine. It's good to have a mixture of both working for a production company and self-producing shows. The biggest challenge I constantly face is finding the balance between touring and being at home with my family in Christchurch.

Songs for Nobodies, Kavanagh Auditorium, Monday, Spetember 24, and Tuesday, September 25, 7.30pm. Tickets $40 for adults, $25 for tertiary students and $20 for school pupils. The show runs for 90 minutes with no interval.