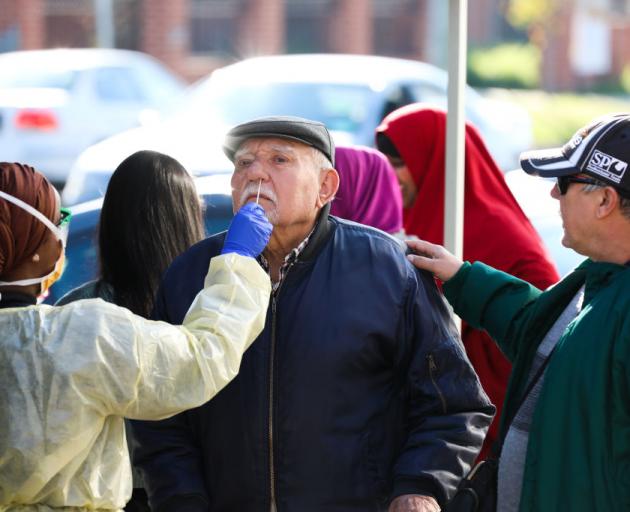 An elderly man has a Covid-19 test under the guidance of a member of the testing team during a Covid-19 testing blitz in the suburb of Broadmeadows yesterday in Melbourne. Photo: Getty Images
Australia's second most populous state says it is considering reimposing social distancing restrictions after the country reported its biggest one-day rise in Covid-19 infections in more than two months.

While many states and territories have yet to report their latest numbers, Victoria said it has detected 75 cases in the past 24 hours - enough to make it Australia's biggest daily outbreak since April 11.

The growing figures have stoked fears of a second wave in Australia after several weeks of fewer than 20 new cases a day.

As cases have mounted, Victoria has embarked on a massive testing regime and the state's chief health officer said the state is considering reimposing social distancing restrictions.

"Changing the law is something we have to consider because we have to do whatever is required to turn this around," Brett Sutton told reporters in Melbourne, referring to questions about localised lockdowns.

In May, Victoria - home to more than 6 million people - began lifting restrictions imposed a month earlier to slow the spread of the virus.

It has pledged to remove the bulk of restrictions by the end of July.

The restrictions, including forcing restaurants and cafes to offer only takeaway services, shutting schools and halting sports proved successful in slowing the spread of Covid-19.

But it was a hammer blow to Australia's economy, which is heading into its first recession in three decades as the unemployment rate hits a 19-year high of 7.1%.

Prime Minister Scott Morrison has called on states to continue easing restrictions, insisting the country's economy can not remain idled.

Morrison ruled out a blanket extension of a A$60 billion wage subsidy scheme beyond its scheduled end in September.

"It can't be sustained forever," Morrison said, adding that another phase of stimulus at the end of September would be targeted "to the people who need it most".

The Grattan Institute, an independent think tank, said in a report published on Monday the government needs to inject up to A$90 billion more in stimulus, including extending its wage subsidy programme.

Morrison said the entire nation will do everything it can to help contain the outbreaks.

He will canvass the possibility of local area lockdowns with Victorian Premier Daniel Andrews on Monday.

Victoria's 75 fresh Covid-19 cases comes on top of 90 new cases found over the weekend in a massive testing blitz.

The state's chief health officer said it was a concerning number.

"I think it will get worse before it gets better," Sutton told reporters.

"It is very hard to make reductions in this space. What I would say is that we know what works already. We just need people to do it."

He said the new cases would have been infected almost a week ago, before an intense communications and testing campaign began.

Mr Morrison said the outbreak was concerning but not surprising.

He will speak with Mr Andrews about what further resources the state might need, potentially including support to lock down hotspot suburbs.

"The premier and I are very adamant that we do what is necessary to contain this outbreak," Mr Morrison told reporters in Sydney.

"Victoria will lead that approach and they will be the final arbiter of what steps they take, but we can leave no stone unturned and no resource left unapplied to this task."

The state has also moved to ensure people in mandatory hotel quarantine are tested for the virus after it emerged three in 10 people were refusing tests - a much higher rate than in other jurisdictions.

Those who refuse tests will have to spend an extra 10 days in quarantine.

A new saliva test developed by the Doherty Institute is being trialled in the state, but experts say at this stage it misses positive results in about 13 per cent of cases.

Deputy Chief Medical Officer Nick Coatsworth said medical officials were considering whether to recommend people in Melbourne wear masks when out in public.

The nation's expert health committee considers its position on masks every week.

"In the bulk of Australia at the moment, they will be of no use at all," he told the ABC.

"But certainly, if there is a place where we are looking to see whether masks should be recommended, it's down in Victoria."

Living in NSW I wish that they would close the border. Next week is the Victorian School Holidays and we certainly do not trust Victorians to behave responsibly.
And for anyone wondering, the Aus Federal Government, and the NSW and Victorian governments refuse to go for elimination. Those states that have gone for elimination have, like NZ, achieved it.
Also, for those who say that the NZ economy has been damaged unnecessarily by the strict Lockdown, just watch what is about to happen to the Aus economy.