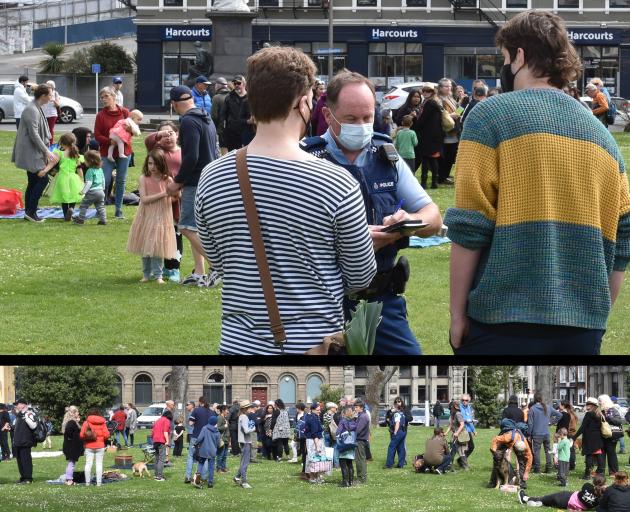 Police attend a demonstration of people rallying against lockdown regulations and showing support of medical autonomy in Queens Gardens, at the The Families Freedom Picnic on Saturday. PHOTO: GREGOR RICHARDSON
About 100 people attended a Dunedin rally protesting the severity of Covid-19 lockdown regulations and supporting the right to choose whether or not to receive a vaccine.

The Families Freedom Picnic was held at Queens Gardens at noon on Saturday.

It was one of many events held nationally, including a protest organised by Destiny Church at the Auckland Domain, which had more than 2000 attendees.

Auckland is at the centre of the Delta outbreak and has been in lockdown for about seven weeks at Alert Levels 4 and 3. The rest of the county is at Level 2.

At the rally, Dunedin City councillor Lee Vandervis spoke about lockdown regulations, freedom of speech and the pressure to be vaccinated.

He said he had "long been concerned about the erosion of freedoms by our central government".

"As a councillor, I have been confronted with severe mental stresses of people too fearful to leave their homes, small business owners whose livelihoods will never recover, and older people sure they will die if Covid comes."

The right to refuse to undergo any medical treatment and the right to freedom of movement had been infringed by the Government’s approach to Covid-19, he said.

Cr Vandervis also spoke about the importance of freedom of speech.

Rally-goers did not feel comfortable giving their names. However, some were eager to share their message.

A healthcare worker said it was not an anti-vaccination protest, but instead celebrated bodily autonomy and freedom.

The social pressure and the "no jab, no job" mentality was "unjust and unfair" to normal citizens trying to "live good honest lives," she said.

Another attendee said New Zealanders overseas were being "refused entry to our own home" and should be allowed back into the country without having to navigate a complicated system.

Very few at the rally were wearing masks.

There were no incidents or arrests.

Shun the social contract & obligations to their community, but insist they get treated in Public hospitals when they get Covid.
Parasites.