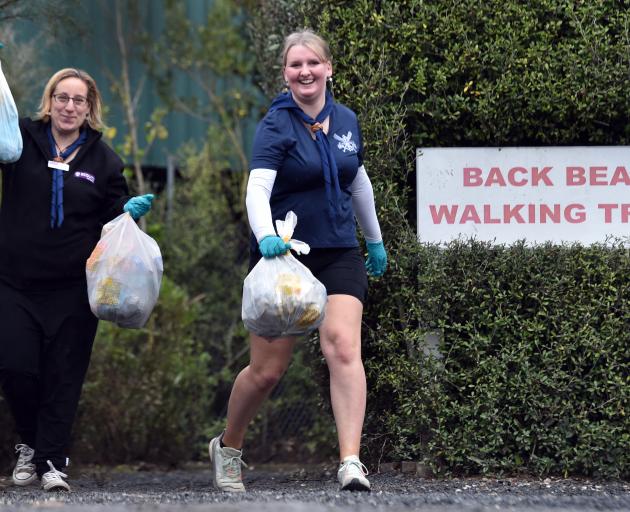 Dropping off bags full of dog poo and rubbish at the Back Beach Scoop the Poop & Rubbish Collection in Port Chalmers yesterday are Terra Nova Sea Scouts kea leader Sera Forbes (left) and cub leader Rose Rothwell. PHOTO: PETER MCINTOSH
There is poo on the paths, poo in the grass and poo getting stuck in your shoe, West Harbour residents say.

It is that persistent dog poo problem that inspired a group of brave poop-scoopers to help clean up the local area.

Organised by Jacque Ruston and Antonia Wood, members of the community gathered at Back Beach yesterday with biodegradable bags and rubber gloves to tackle the high levels of dog faeces.

Ms Wood said there were many beautiful sights around the area that were tainted by the large amount of droppings.

"Nobody wants the area to be famous for all our dog poop," she said.

The waste was so pervasive throughout the area that Ms Wood was inspired to create the Poo Off Our Paths (Poop) Facebook group, dedicated to spreading awareness and organising clean-up days.

Last time the group got together, members collected 30kg of faeces between St Leonards and Ravensbourne.

The amount of poo around the area was "revolting".

The issue was particularly bad for parents, who could not keep their excited children from running about in the grass and getting poo stuck to their shoes, she said.

A significant issue was the lack of available bags and rubbish bins for dog walkers to put their pets’ excrement in.

With some new infrastructure and a bit of "positive shaming" by the community it would not take long for people to change their dog-walking habits, Ms Wood said.

She had taken matters into her own hands.

She had placed buckets along a local walking track, with the words "dog poo" painted on the side.

People used the buckets so often she had to empty them every one or two days, she said.

She had contacted the Dunedin City Council in the hopes of meeting someone to discuss a practical solution to the problem.

The volunteers also took the opportunity to pick up rubbish that was scattered around the beach.

Any responsible dog owner would know that before you leave the house to take 'fido' for a walk, you need 3 things....
1) A jacket
2) A leash
3) Plastic bags for dog poop.

The lack of council funded poo bags is NO EXCUSE!...Nor is the inability of someone to carry a bag of dog poop, back to your car or house.
I have 2 dogs, and I usually end up with 2 -3 bags in the boot of my car after a walk. Not enjoyable, but it's part the job when you own a dog!

Council actually supplies poo bags to owners as part of the dog registration fee. No excuse for not using them, unless your dog is unregistered.

Responsible dog ownership is not difficult. If it is for some they shouldn't own a dog.