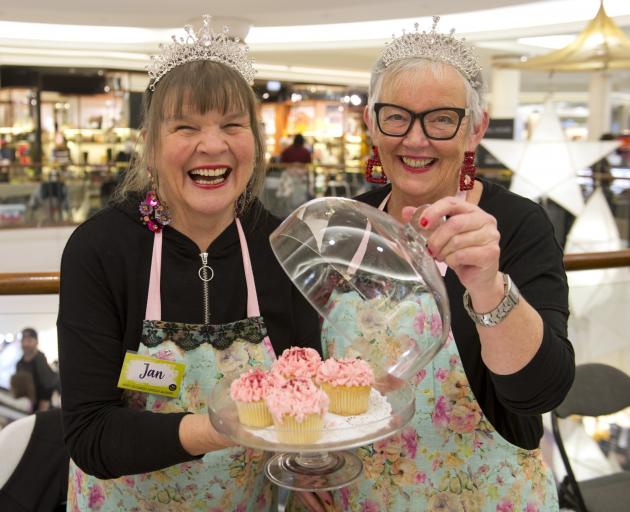 Old friends and business partners Jan McLean (left) and Marion Harper, aka the ‘‘Tiara Tarts’’, were flat out over the long weekend selling their sweet treats in the Meridian Mall, as part of the Port Chalmers Artisan Markets. Photo: Gerard O'Brien
Thousands of people swarmed into three George St malls over the long weekend, and staging the Port Chalmers Artisan Markets there brought benefits to all.

The Wall Street, Golden Centre and Meridian malls announced on social media they were "excited to be hosting" the markets.

Among the many stars of the markets and their more than 50 stalls were old friends, business partners and busy bakers Jan McLean and Marion Harper, also known as the "Tiara Tarts’.

In three days of non-stop trading they sold more than 300 cakes or parts of cakes, large and small, including many cupcakes and carrot cakes, in the most intense bout of selling since their business began last year.

The tiara-wearing duo delivered an exotic mix of baking and banter, chatter and theatre, with a topping of frolics and fun.

Recently some of their baking preparatory work had begun about 7am and baking was going until 9pm after a busy day of selling.

"It’s been a lot of work but it’s all worthwhile," she said.

The lively duo had at least 120 years of baking experience between them.

"We have a lot of laughs with people," she added.

Markets owner-operator Julie Fawcett said the Queen’s Birthday weekend began on Saturday with a "huge day and lots and lots of customers everywhere".

The malls had been busy throughout, and a security officer had told her the Meridian Mall car park had closed at 1pm on Saturday because it was full.

Overall trading was a "tremendous success", and the "huge, huge vibrant event" had been positive not only for her stallholders, but also for mall retailers who had also enjoyed busy trading, she said.