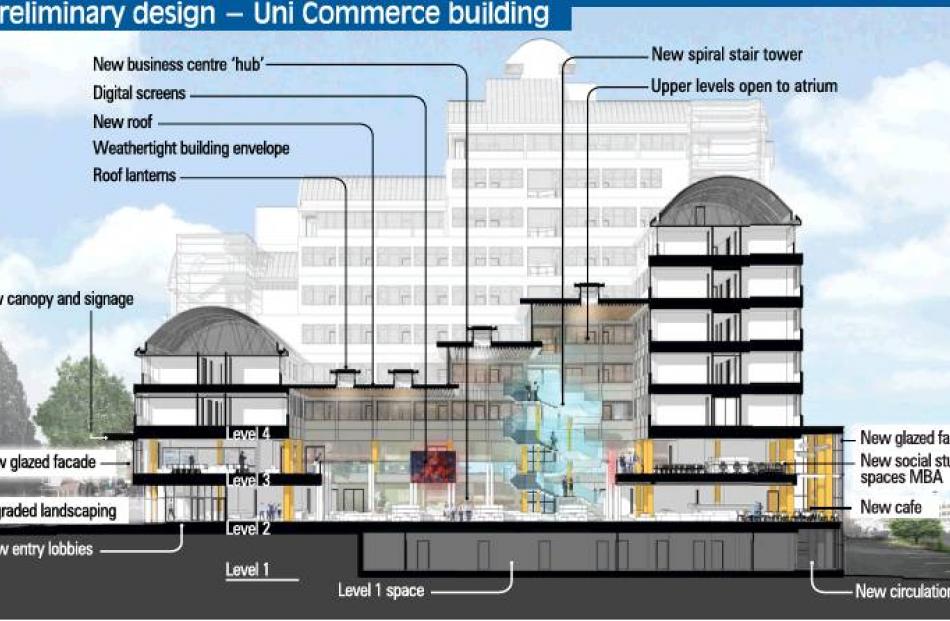 The preliminary design for the redeveloped Commerce Building. Graphic: Mason and Wales Architects. Click to enlarge 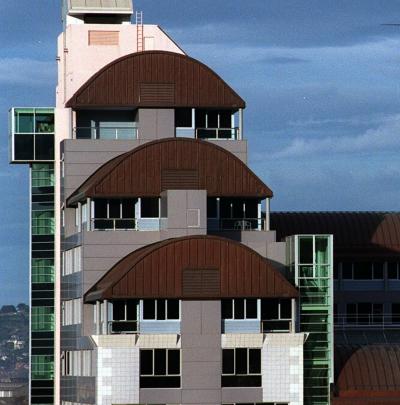 The University of Otago has laid carpet and resurfaced slippery steps in its Commerce Building atrium in a $120,000 temporary fix, and released designs of its promised $15 million redevelopment.

The new carpet is ‘‘marinegrade'', as the building is still prone to leaks, but the university says the main upgrade - hoped to begin in the middle of the year - will ensure the roof is weather-tight.

The university announced the redevelopment last October after numerous injuries in the atrium, including one that resulted in a $60,000 payout and an apology to Auckland woman Katherine Casey, who was left with permanent injuries following a fall.

Ms Casey brought a private prosecution, and the university pleaded guilty last September to a Health and Safety in Employment Act charge of failing to take action to ensure the safety of the flooring for persons walking across it, knowing that failure to take such action was likely to cause serious harm to a person, from about 1996 to 2013.

It emerged at the time the university had received 82 complaints - 12 involving serious injuries - since the building was completed in 1993.

The incidents were in the atrium of the building, and caused in part by leaks from the roof that left tiled areas wet and slippery.

University property services director Barry MacKay said the carpet and an epoxy non-slip surface had been installed during the past six weeks, to be substantially completed for the return of students.

‘‘There is potential for water to leak from the existing roof which is why we have chosen marine-grade carpeting and high-grade epoxy non-slip surfacing on the remaining tiles.

‘‘Both ensure high levels of traction in areas which may get wet from time to time.

‘‘The surfaces are temporary and will remain in place until the major Commerce Building redevelopment project starts in the middle of this year.''

Preliminary designs of building redevelopment show changes on levels two and three, and a new roof.

A new street entrance at level two would be ‘‘more accessible and inviting'' than the current entry. There would be a redeveloped student hub in the atrium, divisional and MBA offices would be relocated and some teaching spaces reconfigured.

Mr MacKay said it would ensure the roof was weather-tight, and provide a ‘‘safe and compliant entrance and internal environment for building users''.

‘‘It will also include fire design and seismic structural improvements.''

He said the building would be opened to the north and south, and the new access would create a welcoming entrance.

The design process and costs were being finalised before the university applied for consents.

The project would be put out to tender and it was hoped construction could start by the middle of the year.

Classes taught in the building would relocate to other parts of the campus, but commerce division staff would remain during the construction process.