The excessive lifestyle of the man at the centre of a $1.59 million fraud at the Dunedin City Council was among the ''red flags'' the council ignored, investigators say.

A 53-page Deloitte report, covering from July 2003 to May this year and released yesterday, found the council lost $1.48 million from the sale of 152 vehicles.

It detailed how former Citifleet team leader Brent Bachop, who died suddenly on May 21 this year after discrepancies were beginning to be uncovered, kept all, or a significant amount of, the proceeds from the vehicles, or sold them at significantly below wholesale rates.

The fraud went beyond the sale of cars, with the report saying it appeared Mr Bachop, was at the ''centre of'' a range activities, including personal spending of at least $102,908 on council fuel cards and buying a $7333 trail bike, which appeared to be for personal use.

Deloitte estimated, in total, the fraud cost the council at least $1.59 million. 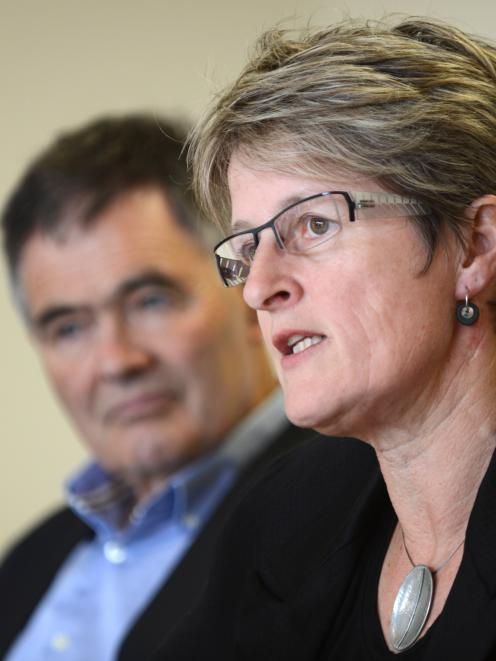 Dunedin City Council chief executive Sue Bidrose and Mayor Dave Cull answer questions yesterday about a report into the $1.59 million fraud at the council. Photo by Peter McIntosh.
The investigators also looked into $104,800 in cash cheques written to replenish pay stations in a council car park, but found it was ''not possible to ascertain'' whether Mr Bachop kept a portion of that money.

Interviewees told investigators after discrepancies were uncovered in mid-May Mr Bachop visited his office and disposed of a ''significant amount of paper records''.

The report placed blame on council staff for allowing the fraud to go undetected for so long.

''A number of red flags, including Mr Bachop's lifestyle exceeding his salary ... were ignored.''

The report noted there was a risk there had been other cases of fraud at the council, but these were not identified.

It was also possible fraud had occurred before July 2003, which was the start of the 10-year period Deloitte looked at.

Council chief executive Sue Bidrose apologised to ratepayers yesterday, but reassured them systems were either in place, or being put in place, to ensure such a fraud could not happen again.

''I'm happy to say I'm sorry. This is not what a good public sector organisation ever, ever aims to have on its books.

''It had gone on for a long time undetected and there were red flags raised that we didn't pick up.

''I'm pretty confident that with what we have put in place, those red flags would initiate a whole course of action which they should have back then, but didn't,'' she said.

It was likely more fraud was committed before 2003, but because it was before the introduction of the current financial system, it would be ''extremely expensive'' for the council to look back before then.

''It would seem odd that [the fraud] started the day the new financial system came into place,'' she said.

The council had recouped $1 million from its insurer QBE, but would be unable to recover any more, as all assets recovered up to $1 million would go to the insurance company.

Mr Cull said the review's findings made it clear previous administrations held ''some responsibility'' for what had occurred.

He was confident those failings would not be repeated.

''All of the failings that have been identified [in the report] have either been dealt with or [are] being dealt with.''

Dunedin Clutha Waitaki Area Commander Inspector Jason Guthrie said the police investigation into the alleged fraud had progressed well and it would be subject to a final review in the new year.

''This is a complex series of offending involving the significant misappropriation of DCC assets,'' he said.

Deloitte was engaged by the council in May to launch an investigation after staff, implementing new financial procedures, identified what appeared to be a discrepancy in the number of Citifleet vehicles.

The names of people who were part the investigation, including councillors and council staff members who bought vehicles and members of the public and car dealerships involved in multiple purchases, were redacted for privacy reasons.

The investigation found no evidence other council staff members took part in the fraud.