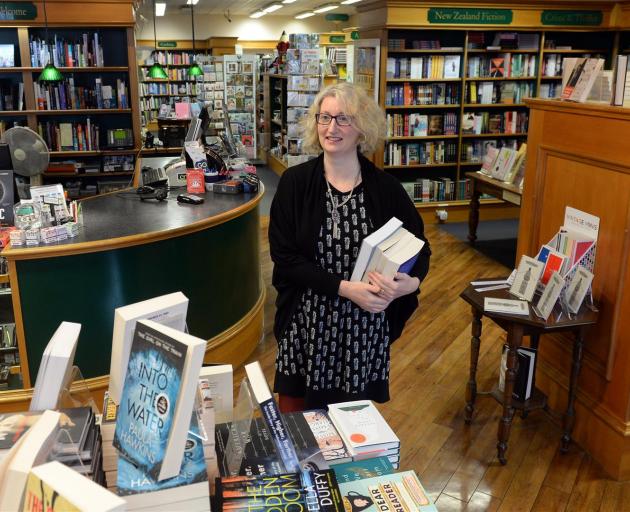 University Bookshop general manager Phillippa Duffy says the store has turned a corner. Photo: Linda Robertson
A beloved Dunedin bookshop has turned its fortunes around and will soon get a multimillion-dollar upgrade.

Since 2014 it has been showing a profit.

Its owner, Otago University Students' Association (OUSA), said in its annual report Ms Duffy was the force behind the ''dramatic turnaround''.

Partly due to its success, OUSA was now considering an about $2million upgrade of the shop, with architect's plans already drawn up.

In an age of e-books, smartphones and Kindles, Ms Duffy said there was still a demand for real books.

''In a digital world reading through books is a pleasure and a leisure activity that people still enjoy,'' she said.

This steady demand for books, customer loyalty, knowledgeable staff and hard work from its dedicated staff and board had contributed to its turn-around, she said.

This came at a time when other independent bookshops across New Zealand had struggled, with few remaining in the South Island.

Demand at UBS had especially increased for children's and young adult books, which had been given a boost by the opening of The Children's Room in 2013.

''We've responded to that growth by adding three new part-time children's book-
sellers, one last week, one this week, and one next week.''

Parents were increasingly realising the value of screen-free time and buying their children books, she said.

Running a successful book shop continued to be tough and the situation was not made any easier by the Government's stance on adding GST to all online purchases from offshore.

Ms Duffy, who was a member of the Booksellers NZ board, had met Customs Minister Nicky Wagner to discuss the issue and was not impressed.

''The approach from her and her officials was wholly unsatisfactory and also showed to me that they don't have a grasp on how it's affecting booksellers and other retailers.''

The upgrade would probably start in the next year and would consolidate the shop on the ground floor, earthquake-strengthen it and refurbish the first floor so it could be rented out.

The shop's footprint would remain the same, but it would gain income from renting out the largely empty first floor.