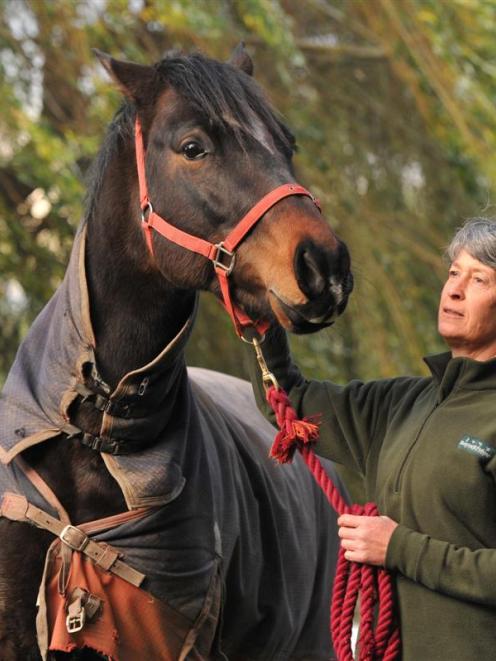 Breeder Kathryn Abernethy with a friend's horse in Mosgiel yesterday. Photo by Craig Baxter.
A sensitive Middlemarch colt who sold for $3000 is putting silverware on his rider's mantelpiece and is now worth more than $1 million.

Clifton Promise, the mount of Jock Paget (29), the winner of the prestigious Badminton horse trials in England, was bred in Middlemarch by Kathryn Abernethy (53), of Mosgiel.

The winning 14-year-old gelding was the offspring of her Middlemarch mare Darn Style and Maheno-based American stallion Engagement.

He ''was an unfashionable thoroughbred stallion with a bad reputation, but I liked him''.

She wanted a filly to ride, not a racehorse, so the equine engagement with the unruly stallion advanced.

However, on November 2, 1998 in Middlemarch, a colt, destined to win on the world stage, was born.

She took the 2-year-old to the Christchurch sales, expecting the buyers to bypass him, but the hammer fell for a North Island buyer at $3000, she said.

She heard the colt was destined for the unforgiving Malaysian racing circuit, where underperforming horses came to a sticky end, she said.

Fortunately, he underperformed early and missed the journey to Asia.

Watching the Badminton horse trial this week, she could tell Clifton Promise and Paget had ''clicked''.

The horses who shared Clifton Promise's bloodline were ''sensitive'' and demanded the rider's total trust.

''If you're too hard on them, you'll get nowhere. So, he has obviously found someone who can understand him, which is really good. I'm pleased about that.''

The gelding would be worth more than $1 million, she said.